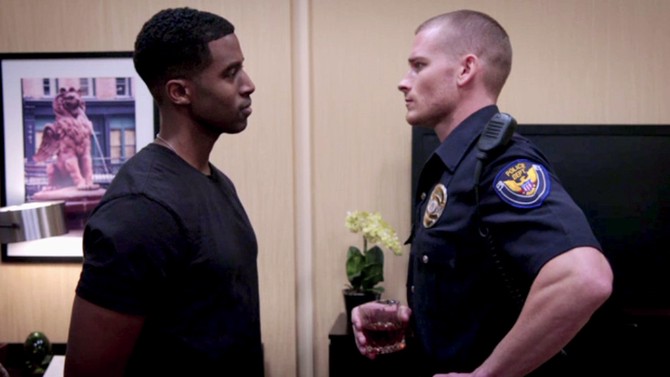 "I have a demon that is on my back, and I think you're just the devil to chase them away," Jeffery tells Officer Justin after persuading him to meet him in his hotel room. He hopes to convince Justin to help him put a stop to his mother's evil machinations.

Jeffery offers Justin a drink and then attempts to seduce him. Justin is resistant at first, but eventually he gives in. After making love, Jeffery leaves Justin handcuffed to the bed, despite Justin's insistence that he be released and that he isn’t gay. Jeffery refuses to uncuff Justin until he can admit who he really is and agrees to help him take down Angela. Knowing that Justin might take out his anger on him if he were to let him go, Jeffery leaves him alone in the hotel room with the key to the handcuffs just out of reach.

"I just don’t trust you," Jeffery tells him. "When you can calm down and admit that you enjoyed it—and you're ready to help me take down my mother—call me." 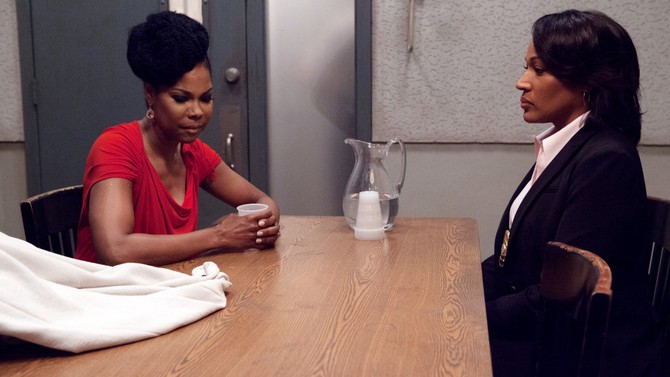 Veronica is brought in for questioning after a gunman shot and killed Maggie Day in Veronica's home.

”So, you had no idea anyone was in the house?" the detective says.

"How would I know that?" Veronica says, visibly distraught.

"Had you been in the house?"

"No, I came and saw the officer and went straight to him," Veronica tells her. Through her crocodile tears, Veronica bursts out in statements of grief, hoping to convince the detective that she truly cared for Maggie as a friend, and that she played no role in her murder. "Maggie Day. Oh, God, this is so terrible," she says.

Just then, David shows up wanting to speak with his wife, whom he recently learned had survived the attack at her house. "Your husband is out there," the detective tells Veronica.

"May I see him, please? I need to see my husband," Veronica says with urgency.

When David enters the room, Veronica emotionally collapses into his arms, sobbing and pulling him into a tight embrace. "The bitch is dead," she whispers icily so that only he can hear.

A stunned and wary David looks into his wife's eyes, as if seeing her for the first time.

"Take me home, sweetheart," Veronica says sweetly to him—loud enough for the detective to hear.

"Detective, I believe we are finished with your questions for now." 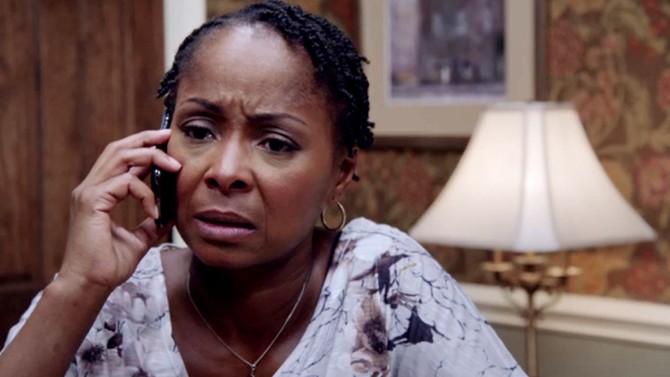 Hanna calls Allyah, the caseworker assigned to her grandson, Quincy Jr. Unbeknownst to Hanna, Allyah had previously been blackmailed by Candace into taking Quincy Jr. away from Hanna, against whom Candace has a personal vendetta. Now, the awful truth comes out: Quincy Jr. has been placed in foster care.

Hanna demands to know where her grandson is so that she can try to take him back. "You better tell me where he's at!" she yells into her phone.

"I'm sorry. I can't," Allyah says, quickly ending the conversation and hanging up.

The news that Candace allowed Quincy Jr. to be taken into foster care has Hanna apoplectic with rage. "You take me to your sister's house right now!" she screams at Benny.

Benny tries to calm his mother down, but she is too riled up. "She is so hell-bent on keeping that baby from me that she would put him in foster care?" she yells incredulously.

"You're going to have a heart attack if you don't relax," Benny says evenly.

"That's all right. As long I'm whooping her ass while I'm doing it, I'll die happy!" Hanna snaps back. "Has she lost her damn mind? Take me to her!"

Benny struggles to defuse the situation. "I'm sure she has a really good reason for this, Mama," he says.

Hanna is sure that vindictiveness is behind Candace putting Quincy Jr. in foster care. "She's so evil that she would cut off her nose to spite her face!" 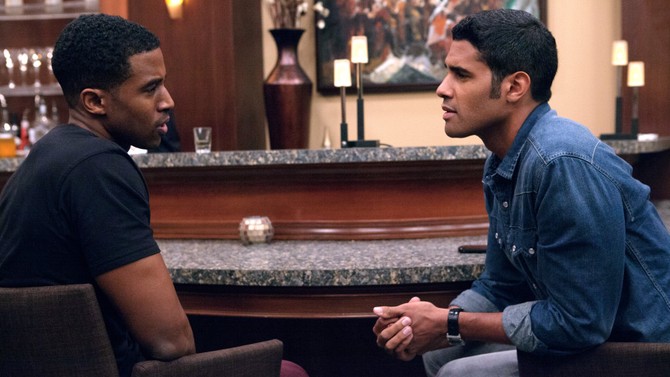 At the hotel bar, Jeffery runs into Landon, who has been drinking heavily and is visibly shaken. He frantically asks Jeffery whether Candace is with him. Jeffery assures Landon that she is not.

"How well do you know her?" Landon asks.

Landon explains how Oscar questioned him about Candace, and reveals how Candace threatened his life. Jeffery isn't surprised. He has been learning what his friend Candace is truly capable of.

Jeffery wonders why Landon is still in town, since the campaign is over, and Landon explains how Maggie Day is trying to salvage David's political career. After Jeffery's insistent questioning, Landon divulges that David is having an affair with Maggie.

"I want him to get with her," Jeffery says. "She makes him happy."

Landon propositions him, but Jeffery turns him down, telling him, coldly, that he's "had better" since him.

"Who are you now?" Landon says.

Just then, Landon receives a message saying that Maggie has been shot and killed. Landon runs off in stunned disbelief as Jeffery follows after him. 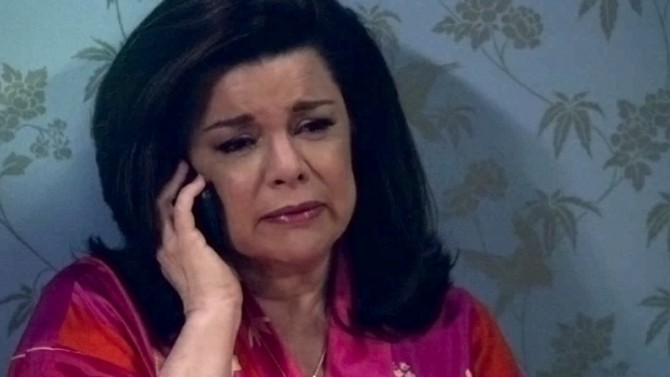 At the Cryer mansion, Katheryn is alone and despondent, fearing for her missing son. She calls Hanna repeatedly until she finally picks up, but Hanna is still angry after everything that transpired between them. Katheryn apologizes for not giving her the money she owed her, and offers to help her in any way she can. But Hanna is too proud to accept any money or assistance from her.

Katheryn explains that Wyatt is missing and that she is beginning to fear the worst. "If my son dies, Hanna, I won't have any children left," Katheryn tells her desperately.

Hanna doesn't know what she can do to help, but she agrees to pray for Katheryn and her son. Katheryn asks for one last favor from her former friend. She wants Hanna to be there for her if she finds out that Wyatt is gone for good.

"I don't think you're going to get that call, but if you do, I will be there for you," Hanna tells her. "Until that time, though, we don't have anything to say to each other." 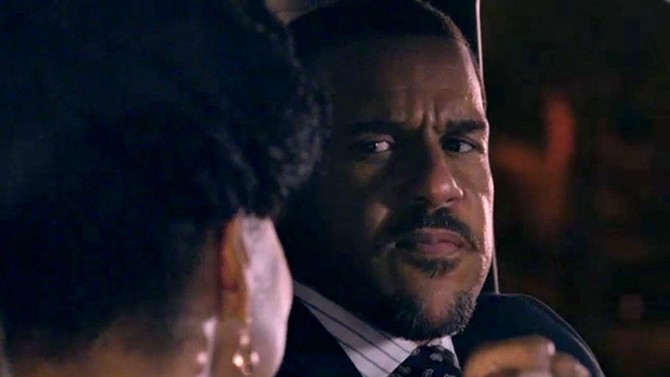 The tension in the car between David and Veronica on the way home from the police station is palpable when David starts inquiring into the death of Maggie Day. "So, how did you do it?" he says quietly.

"Do what?" Veronica says, playing dumb.

"I don't know what you're talking about."

"Tell me," David says, grabbing her arm. Veronica points out the car that's been following them and tells him that it's her personal security. Disgustedly, David releases her arm and then begins fumbling for something in the middle console.

"Oh, so you're going to shoot me now," Veronica says with delight.

Rather than pulling a pistol, however, David hands her some paperwork.

"What is this?" Veronica says with genuine surprise.

Despite having previously served David with divorce papers, now Veronica refuses to sign them and tears them up.

Veronica promises David that he'll regret it if he doesn't reverse his decision to file the divorce papers. "I will make every day of your life a living hell," she says.

"Good," he says evenly, "because hell would be better than what I'm going through now."

A brief silence descends between husband and wife. Then, David glances in his rearview mirror. "You said that's your car behind?" David asks. When Veronica replies in the affirmative, he suddenly pulls the car over to the side of the road. "Get out."

"Get out or I will drag your ass out," David says.

"Now...that's the husband I want. I would love to see that," Veronica says with a chuckle.

David follows through on his threat, unbuckling his seatbelt and exiting the car.

As David walks around the front of the car, barely keeping his rage under control, Veronica continues to cackle with glee. "Most excitement I've had in this marriage in about five or six years!" she says.

David opens the passenger side and, true to his word, forcibly removes his wife from her seat, pushing her toward her hired muscle, who have stopped to check on their employer. He then turns to leave as Veronica continues to shout taunts at his back.