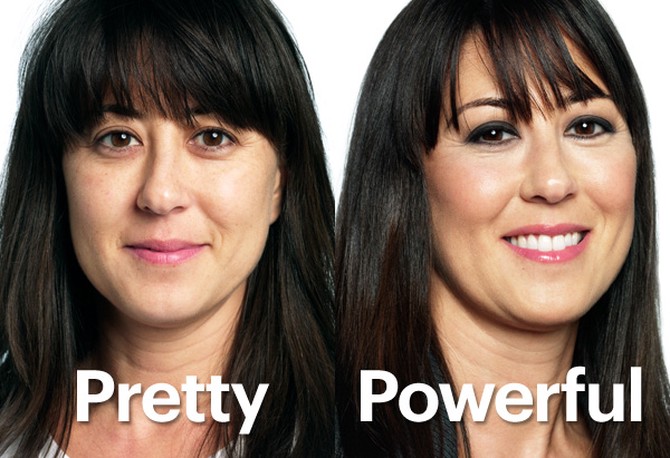 2 of 18
How Bobbi took Mimi from Pretty to Pretty Powerful
Mimi's Problem: "The redness and dark circles around my eyes make me look permanently exhausted."

Bobbi's Pretty Powerful Solution: You're not alone. From light circles to extreme undereye darkness, all women occasionally battle that "fatigued" look. There are all sorts of causes for it: aging, genetics, allergies, stress, nutrition, lack of sleep, etc. But thank God for concealer. It's Bobbi's "secret to the universe" and the key to faking that fresh, well-rested look that we get from a good night's sleep. Bobbi's foolproof method: Apply a peachy or pink-toned corrector (to counteract any dark purplish tones) then layer on a creamy, yellow-based concealer. Pat it into skin with your finger for a seamlessly blended finish. Once the concealer is done and perfect, then comes the black eyeliner, Bobbi's other super-favorite beauty product. Draw a thick line just along the upper lashes to define your eyes, then brush on two or three coats of black mascara—again, just to the upper lashes. Sweep pink blush on the apples of your cheeks, swipe on some lip gloss, and you're ready to go.
Published 07/19/2010
PREVIOUS | NEXT
More Fashion & Beauty
Flawless Foundation: 4 Steps to Faking It
Bobbi Brown's 7 Best Pieces of Beauty Advice
Bobbi Brown's Makeup Facelift
The Secret to a Flawless Face
Office-Chic Makeup
Find Your Makeup Match
10 Makeup Secrets the Pros Swear By
Revamping the Classics: 4 Timeless Looks Get Modern Updates