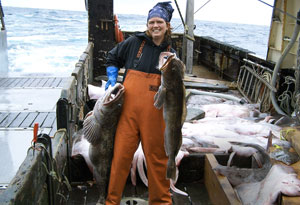 Photo: Courtesy of Gwen Rains
Gwen Rains dreamed of a life aquatic, of venturing beyond her mobile home, her unyielding religion, her landlocked small town in Arkansas, and heading off to sea. Eventually, she did. In frigid Alaskan waters, on a brutal March day in 2008, she found herself and almost lost everything.
It was just before 2:30 A.M. on March 23, 2008, when the wall phone rang in Gwen Rains's tiny cabin.

She was onboard the Alaska Ranger, a 184-foot fishing trawler in the Bering Sea, bundled up in thermal underwear and tucked into a sleeping bag on a narrow bunk bed.

From the top bunk, Gwen's cabinmate, Jay Vallee, picked up. "Hello? Hello?" There was no one there. He put down the receiver, and the phone immediately rang again. "Hello?" Still no answer.

At 38, Gwen was tall and sturdy, with huge blue eyes and dirty-blonde hair that fell in soft waves below her shoulders. Along with Vallee, 25, she was a fisheries observer—a biologist hired to work on commercial boats and gather the fish-catch numbers used to keep ocean populations sustainable. Vallee had been on the ship for three weeks, Gwen just four days. A middle-of-the-night phone call wasn't particularly unusual—Gwen imagined it was probably the first mate summoning them to the wheelhouse for a routine question.

"Or maybe it's a safety drill," she thought as she pulled herself out of bed, slid into the knee-high rubber boots she always wore on the ship, and headed up one level to the wheelhouse.

As Gwen approached the top deck, the general alarm, a high-pitched ringing, sounded throughout the ship. Outside, the temperature was 15°F, and the wind whipped across the ice-covered deck at nearly 40 miles per hour. The ship's second-in-command, David Silveira, stood at the top of the staircase. During two previous seasons, Gwen had worked with the 50-year-old former tuna fisherman on another boat, the Alaska Pioneer, where they spent hours together in the wheelhouse, chatting and watching porpoises and whales. Silveira had decades of experience; captaining the Pioneer was his normal gig, and he was known for his calm demeanor. But now his face was awash with fear. Gwen knew that something was terribly wrong.

Silveira turned to Gwen. "This is bad," he said. "This is really, really bad."

"You're not running a drill?" Gwen asked.

"No. The ship is flooding."

Even as a kid growing up in landlocked Marshall, Arkansas, Gwen was crazy about fish. Her favorite TV shows were documentaries about whales, and she loved nothing more than a Saturday out on a lake, angling for catfish with her grandfather in his flat-bottomed skiff. One of Gwen's favorite childhood memories is from that boat: "Grandpa took me fishing, and it started thundering. But that's when we really started catching fish. So he said, 'If you promise not to tell your mom and grandma I kept you out on the boat in the storm, we'll stay and fish.' And I never did."

When Gwen was 13, she saved up to buy a 55-gallon aquarium, then filled it with tetras, guppies, and angelfish. Science was her best subject, and she dreamed of being a research biologist, but as a Jehovah's Witness, she'd grown up hearing the church preach against the corrupting influences of college. She dropped out of high school after her sophomore year, settled for a GED, got married at 18, and had her first child a couple of years later.

By the time she was 29, Gwen was living in Texas, married to an electrician, and chasing after four kids under the age of 8. The marriage floundered. Gwen put down $3,000 cash for a mobile home back in Marshall and moved in with the kids and several aquariums. She had left the Jehovah's Witnesses a few years earlier, and by the time the divorce papers arrived in the mail, she was already enrolled in college.

"It was by far the worst boat I'd ever set foot on"
From the June 2010 issue of O, The Oprah Magazine

More Inspiration
Breathing Space: June 2010
Thought for Today - Fatherhood
How I Lost 25 Pounds (and Stopped Avoiding the Mirror)
How to Live in the Moment
You Don't Need to Be an Artist to Have Imagination
What Inspires the Most Creative People We Know
6 Things Gayle King Is Loving This September
23 O Talks Insights That Will Feed Your Soul