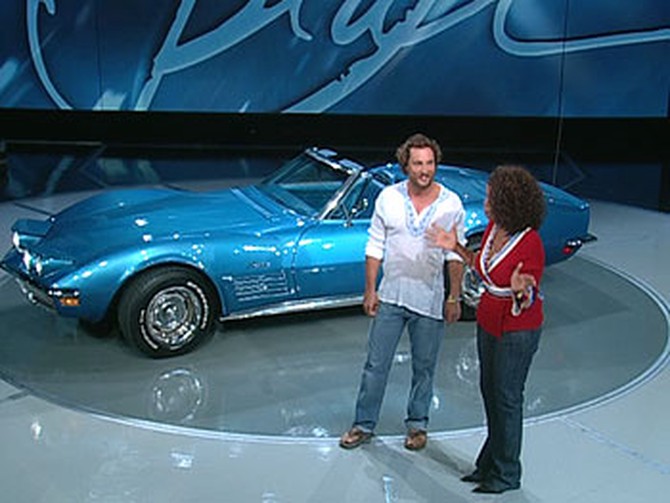 Matthew McConaughey has spent many nights driving to Mexico with one of his greatest loves, but he decided to give her up—and with good reason.

Her name is Mako—like the shark—and she's a 1971 Chevy Stingray Corvette. Matthew decided to auction off his baby on eBay® to raise money for Oprah's Angel Network. His plan was to build a playground in Houston for all the evacuees who relocated to Angel Lane after Hurricanes Katrina and Rita.

Matthew's been committed to Angel Lane and the 65 families in the neighborhood for well over a year.

"We schedule our work. We schedule our vacations. Service is the harder one, selfishly sometimes, to schedule. But I've noticed that for me and for everybody that I know that signs up to go give some time to something, as soon as you're done, it feels like the vacation from the inside out," Matthew says. 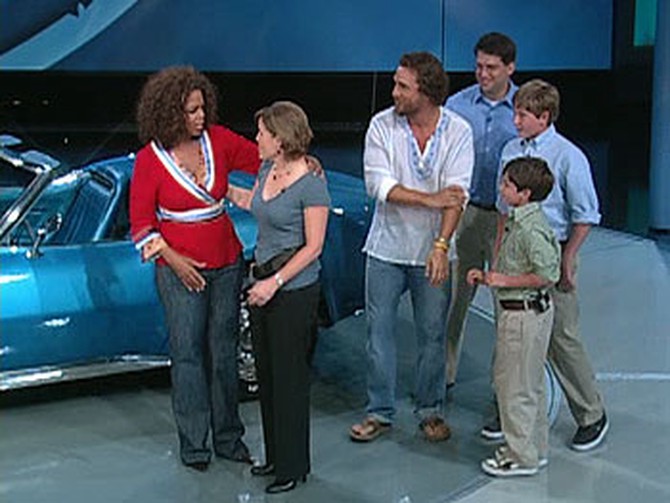 After a 10-day auction, Matthew's car drove a headline-making $61,600! Meet the Rindler family, the lucky new owners of Matthew's Corvette. Missy's husband, Eric, had always wanted a car like this, but she saw something more than just a gift for her husband. 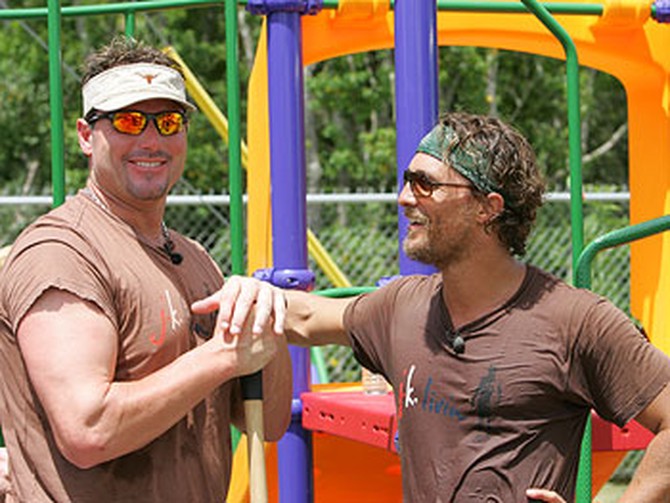 On a steamy summer day, Matthew and a crew of volunteers meet on Angel Lane in Houston, Texas, to build an entire playground for 65 families in just one day.

"Whether it's sports, athletics, whether it's meeting other kids, this is where communities start, on playgrounds like this," Matthew says.

The cement is poured, and the equipment is delivered. Matthew even calls in reinforcements—including fellow Texan and superstar Houston Astros pitcher Roger Clemens. 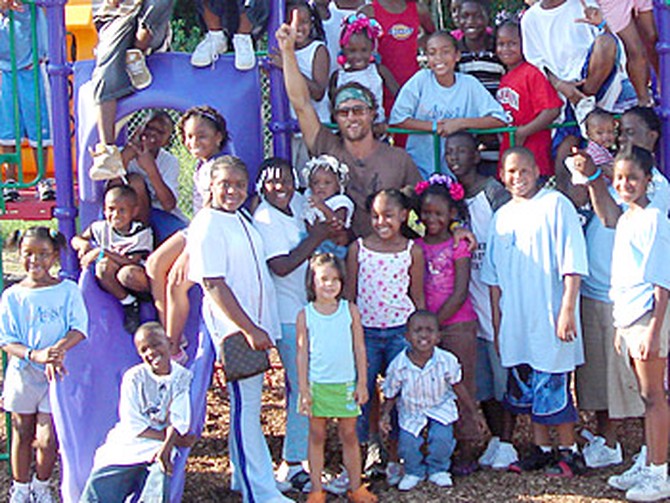 After a long day of working in the hot sun and 100-degree heat, Matthew's ready to present his gift to the neighborhood.

"Y'all remember what this looked like? Now we got that playground, we got benches we can sit on. We got a merry-go-round. We got a sandbox. Now, let's go play!" Matthew says.

The kids rush to test it out. Merry-go-round! Slides! Everything works!

To top off a hard day's work, Houston's own NBA legend Clyde Drexler sends over his world-famous Texas BBQ. 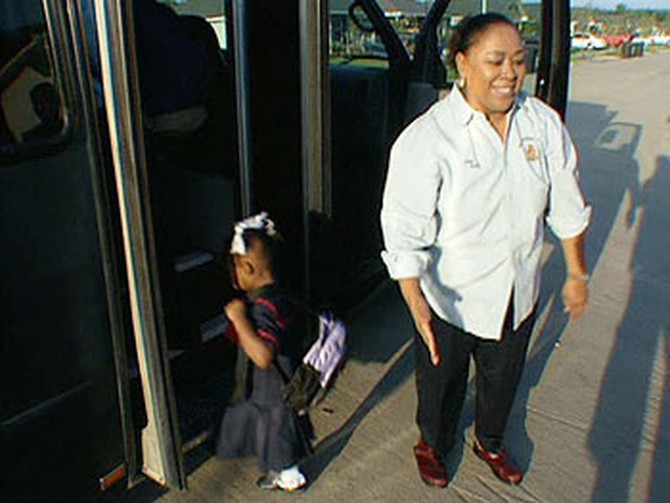 Billye Moutra, a principal in Houston, was so moved by the outpouring of love and commitment to community on Angel Lane that she and her husband have begun giving elementary school scholarships to the students there. "We want to show the children that no matter what happened behind them, let's move forward," she says. 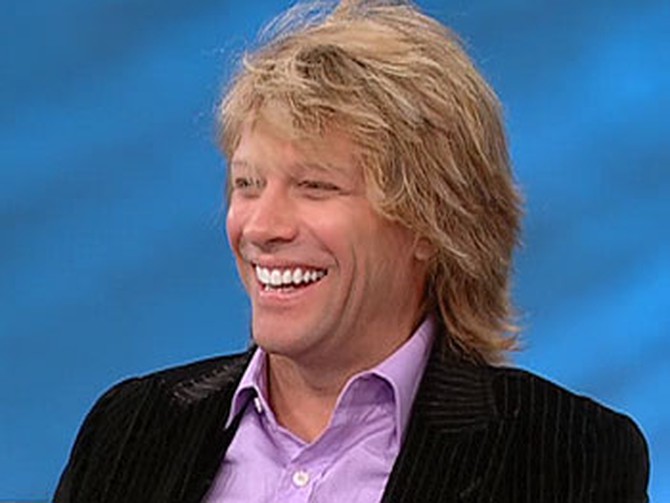 Just one year ago, Jon Bon Jovi and his band rocked Oprah's world with a $1 million donation to Oprah's Angel Network for a new neighborhood in Houma, Louisiana.

"To put faces to the dream that we had together a year ago moved me like nothing else. It moved mountains emotionally. Because in light of what happened with Katrina, I felt so helpless a year ago watching television and not knowing what I could do from 1,500 miles away," Bon Jovi says.

Jon says his donation was the best $1 million he's ever spent. Between himself, his band and his football team, the Philadelphia Soul, Jon says he has built 49 homes. Still, Jon says it's everyone's responsibility to help out.

"It is America's responsibility to do that," Oprah says. "There's still thousands and thousands of people without homes."

"We have to help each other in order to keep community alive," Jon says. 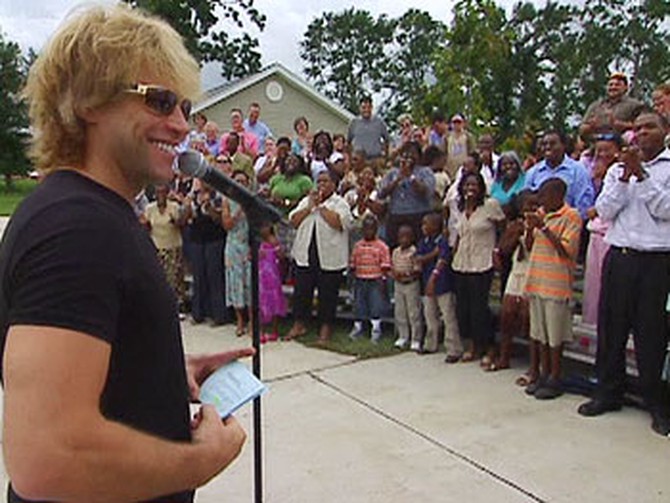 Recently, Jon got to see his very own boulevard of dreams. It was a humbling experience, he says. "I wonder how, in that situation, I may have reacted, had I had my life stolen away from me," Jon says.

As Jon cuts the ribbon to Bon Jovi Boulevard, the excited new homeowners cheer at the top of their lungs. "I wanted to make a difference and by pooling our efforts with the Oprah Angel Network we were able to build this dream so you guys can have a place to lay your head in comfort and pursue your dreams again and hug your babies," Jon says.

After Jon hands everyone their keys, he has a surprise for the new homeowners: Sprint has given everyone a phone and free service for a year!

That's not all.... Thanks to the generosity of Sprint Communications, Inc. and GameTime, Inc., a state-of-the-art playground is now ready to go for the entire neighborhood. 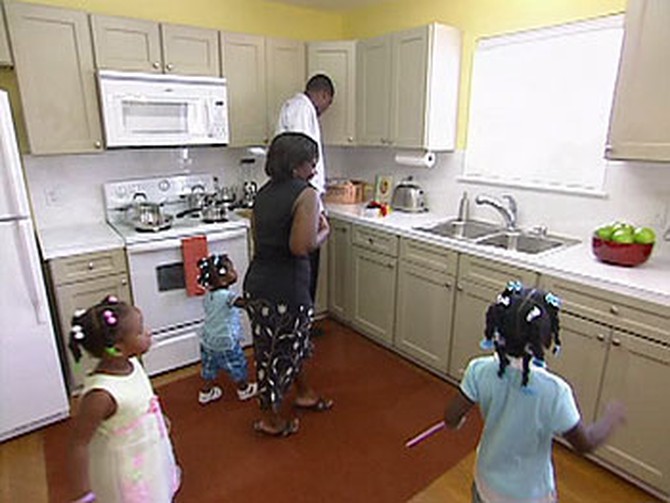 The Hall family, evacuees from New Orleans, are now opening the door to a new life on Bon Jovi Boulevard.

The family gasps as they see their new living room with bright yellow walls, beautiful striped couches and wood floors.

Their new kitchen, however, means the most to them. Just the day before, the Halls ate their meals camped out on a garage floor. Now, they'll be eating in their brand new kitchen, complete with new appliances, wood floors and a dining set with gorgeous red chairs.

"No more eating on the floor!" Angela exclaims. 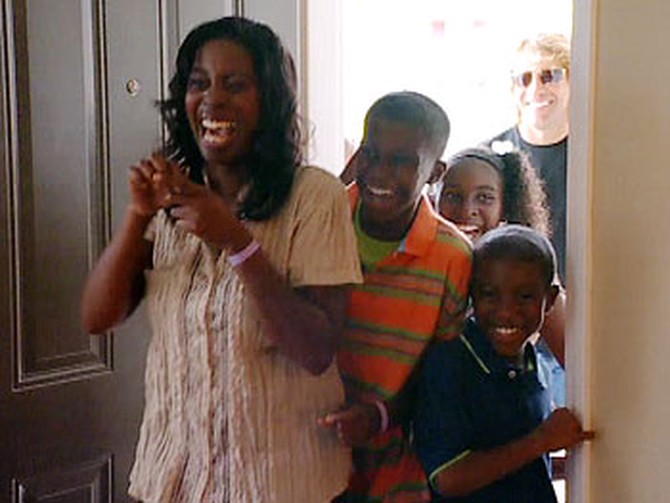 Down the street, Jon takes Danielle Martin and her three children to see their completely furnished home, styled by Nate Berkus with items donated through the Oprah Katrina Homes Registry!

The family can't get over their new kitchen and living room. It's decorated with Danielle's sons' artwork! Still, the best part of the Martins' new home may just be that everyone has their own room! Danielle's son has a sports theme, and her daughter's room also features her very own artwork. Danielle's master bedroom features a soothing palette of earth tones and a big comfortable bed. 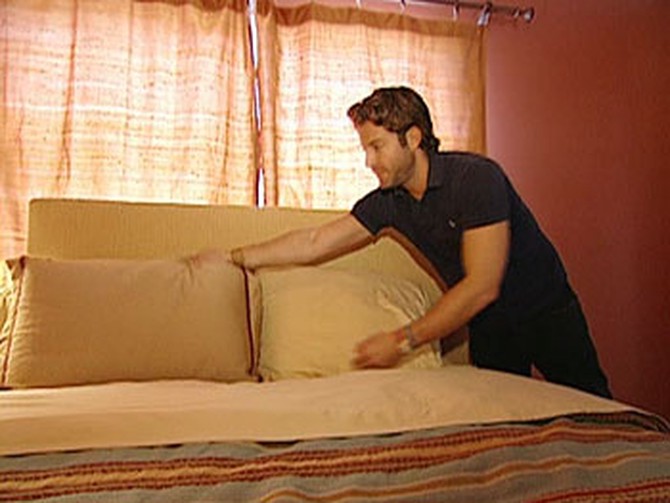 Designer Nate Berkus took the time to give each home some tender loving care on Bon Jovi Boulevard. Thanks to Nate and your donations to the Oprah Katrina Homes Registry, each home is even more warm and inviting! 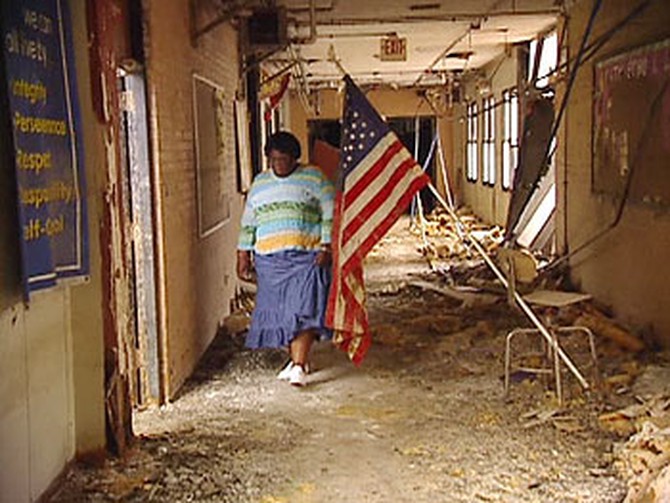 Sylvia was a schoolteacher in the 9th Ward before Hurricane Katrina. The Oprah Show cameras followed her back to see the devastation for the first time after the storm hit. "I can't even recognize which way to turn," Sylvia says through tears.

She finds her school completely destroyed and wanders the bare halls. "I just hope that most of the students made it out. I know that some didn't, but I'm hoping that most did," she says.

One child who did make it was Sylvia's 11-year-old son, Chester. After the storm, Chester lived with his father hundreds of miles away as she searched for work and a place to live. They were separated for nine long months.

"The hardest part was not being with my son. He called me one day and said, 'Mom, I need you to help me with my homewwork.' And I tried to help him over the phone," she says. 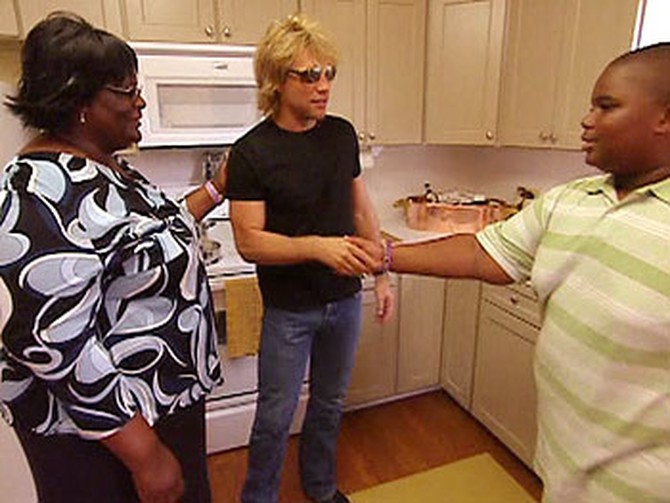 Sylvia and Chester are reunited, and Jon had the honor of welcoming them home. "It's gotta really feel good after nine months of being separated for you guys to know that when everyone goes home tonight, this is your home," Jon says.

Sylvia breaks down into tears as she sees her new living room, complete with a portrait of her and Chester. "I'm sorry, I keep crying," she says. "As long as it's all tears of joy," says Jon. "No more tears of pain." 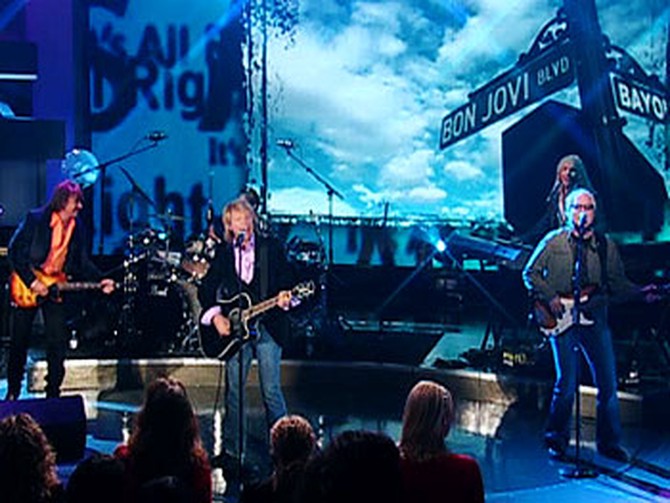 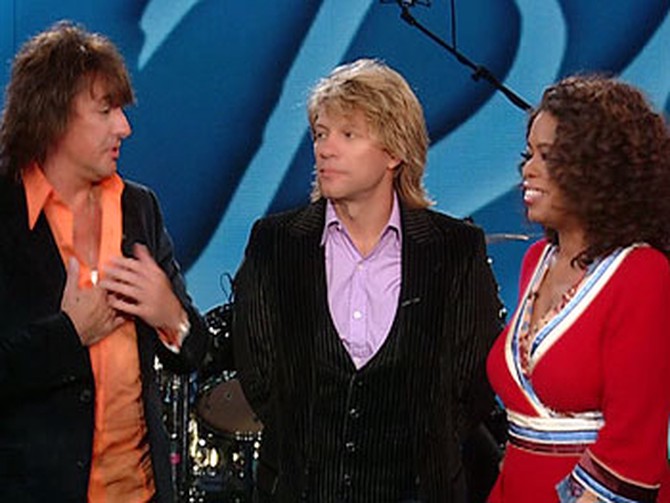 Bon Jovi guitarist Richie Sambora also pitched in to make Bon Jovi Boulevard a reality and says it's amazing to be able to see where his money has gone.

"I had tears in my eyes back there, I really did. It warmed my heart," Richie says. "I'm so glad we can do all that stuff." 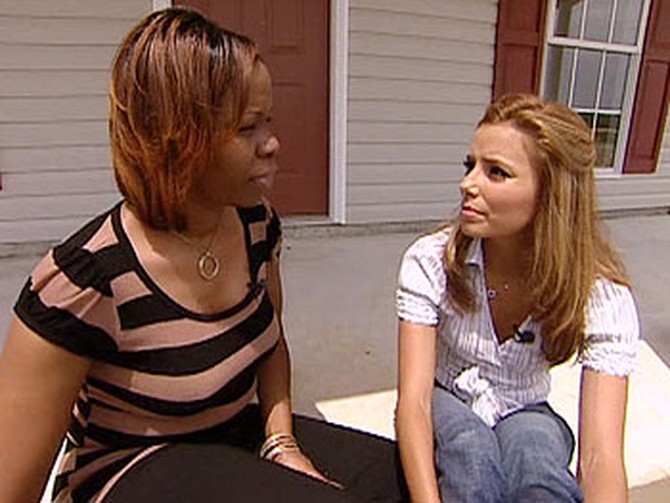 After Nate Berkus made over her parents' house, Desperate Housewives's Eva Longoria and her boyfriend, NBA star Tony Parker, were so inspired that they donated $50,000 to the Angel Network to sponsor a Katrina Home.

Eva wanted to do more, though. Now that the home they sponsored is built, she flew to Dothan, Alabama, to help the new owner, Anya, settle in.

Anya and her young son fled New Orleans, first to Texas before moving again to Alabama. "Hurricane Katrina took away family, it took away friends," she says. "It took away life as we knew it." 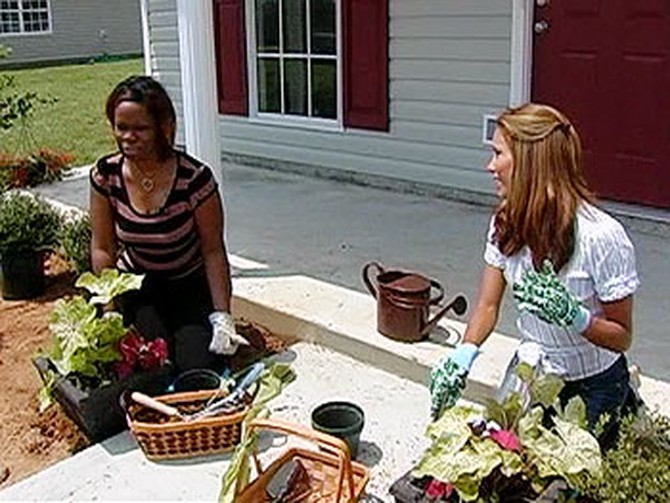 Eva is all ready to help Anya plant her garden...in her high heels!

After Eva and Anya plant some greenery, Eva surprises Anya with a housewarming gift that is sure to help Anya put down more roots in Dothan—a porch swing.

When Anya's mother, Evelyn, stops by for a visit, Eva reveals the best surprise of all. Evelyn—also a Katrina survivor from New Orleans—is moving in next door.

"It's amazing that my son has a swing and a yard to run around in. And my mom gets to be right next door to me," Anya says. "My heart is overwhelmed." 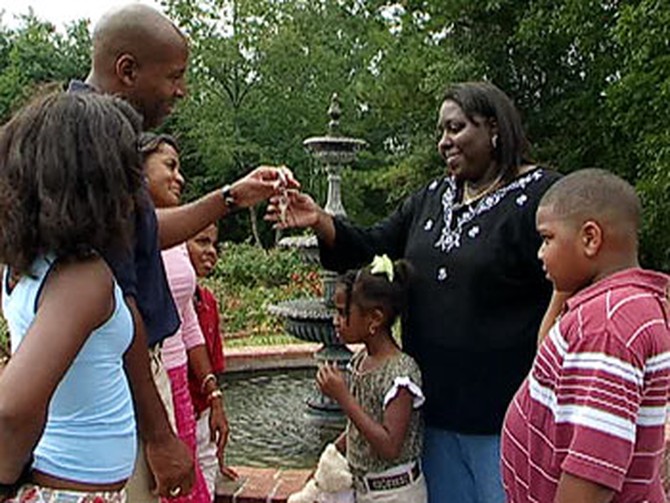 The Grain family was the generous sponsor of another Angel Network home in Dothan. When the new owners were ready to move in, the Grains were there to personally hand over the keys.

"What made it feel so special is that we actually made the connection through Oprah's Angel Network," Lisa Grain says. "We were so inspired, we want to do it again." 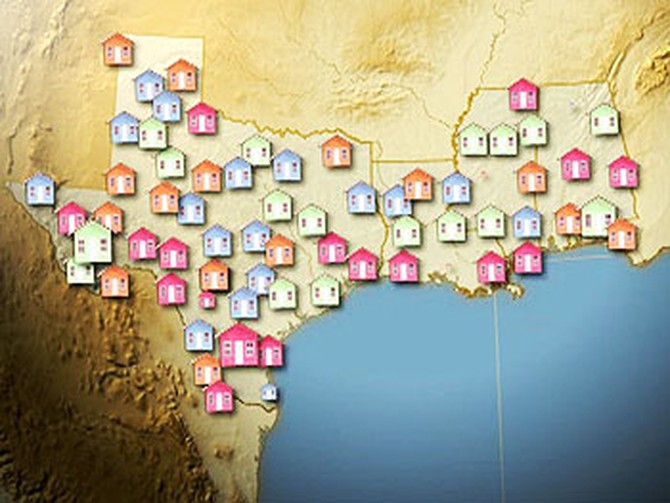 It's not just the efforts of celebrities that have made a difference in the lives of hurricane victims. The efforts of viewers like you have been instrumental, from donations to shopping on the Oprah Katrina Homes Registry.

To date, more than $11 million has been donated to the Katrina project.

The original mission was to build more than 100 homes in the Gulf States, and the construction continues. More homes are being built in Jackson, Mississippi, and a second street of homes funded by NBA player Kevin Garnett was finished in August. Now, 18 families have started new lives there.

"You all saw where your money is going," Oprah says. "Thank you so much."
Published 09/20/2006
More The Oprah Winfrey Show
Ricky Martin's Mission
Children Changing the World
Under the Sea in Australia
Debbie Reynolds' Hollywood Treasures
Tour the Bush's Crawford Retreat
Do You Want Fried with That?
Surviving the Tsunami
15 of The Oprah Show's Greatest Giveaways