Do You Want Fried with That?

The State Fair of Texas could be the fried food capital of the world. Take a look at some of the finalists for the coveted Big Tex Choice awards. 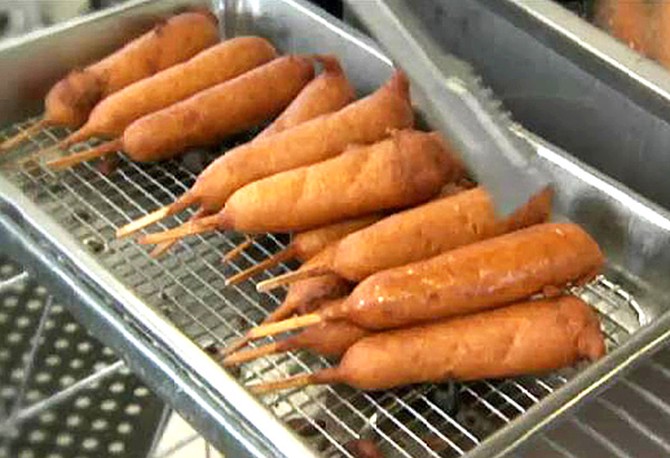 Fletcher's Corny Dog
Fletcher's has been serving up its signature corny dogs since 1942. Brothers Skip and Bill run the family business, which sells half a million corny dogs during the state fair's 24-day run. What makes the dogs so delish? "They're cooked fresh, never frozen," Skip says. "Cooked right in front of your eyeballs and coming out piping hot with a little mustard on it. There's nothing better." Skip's also the corny dog tester, and he says he eats three or four dogs a day. That's 72 corny dogs in less than a month!

"This is fabulous," Oprah says. "Yeehaaaw." 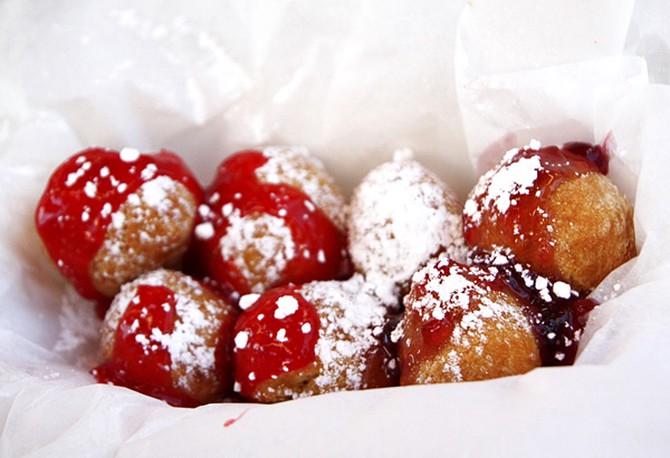 Fried Butter
Abel Gonzalez is the Texas state fair's king of deep-fried decadence. He's won the most Big Tex Choice awards for fried food in the fair's history. Abel's business is so good, he's been able to give up his nine-to-five job and fry full time.

Fried butter, his latest creation, won this year's title for Most Creative. How does he do it? "You get some butter and you freeze it, and you wrap it around the dough, like biscuit dough, and then you deep-fry it," Abel says. Each piece uses only a pad of butter, he says.

Abel got the idea from his own obsession with toast and butter. "I could not get enough of it," he says. When Oprah is hesitant to try it, Abel's got some helpful advice. "You've got to commit to the butter, ma'am," he says. "Like a popper." 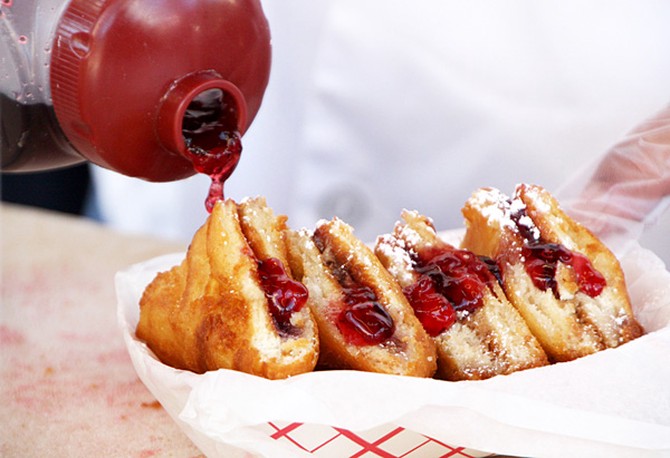 Fried Peanut Butter, Jelly and Banana
Gayle King's been obsessing over Abel's prize-winning deep-fried peanut butter, jelly and banana sandwich since arriving in Texas. When she tries it, she's not disappointed. "We should sing Hallelujah right now," she says. "This is amazing." 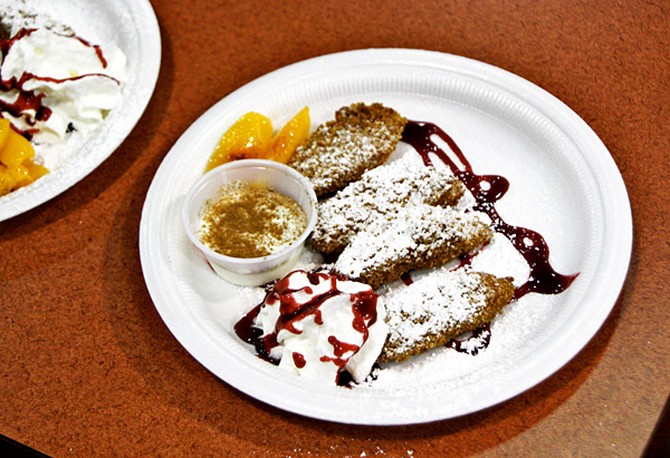 Deep-Fried Peaches and Cream
The winner of this year's Big Tex Choice award for great taste was Fernie's deep-fried peaches and cream. Oprah loves it. "I might eat salads the rest of the week," she says. "Nobody tell Dr. Oz about the fried peaches!" 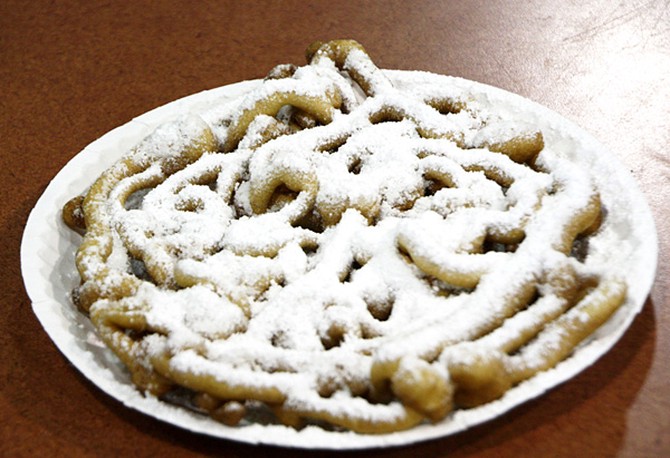 Funnel Cake
Funnel cake, a favorite at carnivals and state fairs, is made by pouring batter into hot oil through a funnel or spout and then deep-frying it. What's the difference between funnel cake and fried dough? Funnel cake is made with unleavened batter. 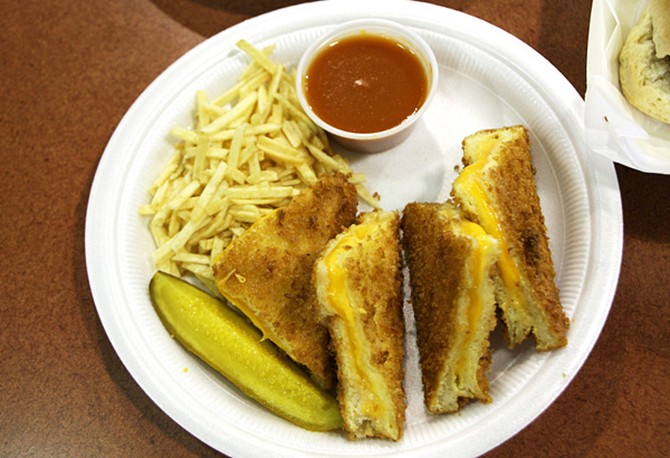 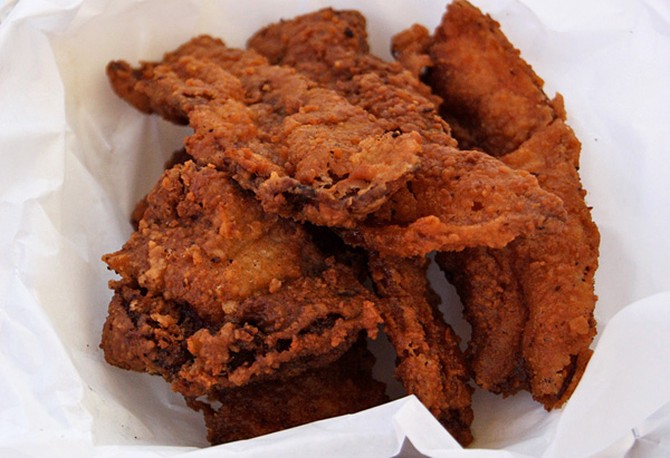 Chicken Fried Bacon
In 2008, chicken fried bacon won the State Fair of Texas' Best Taste Big Tex Choice award. Dip it in a side of creamy ranch or honey-mustard sauce to pack an extra punch. 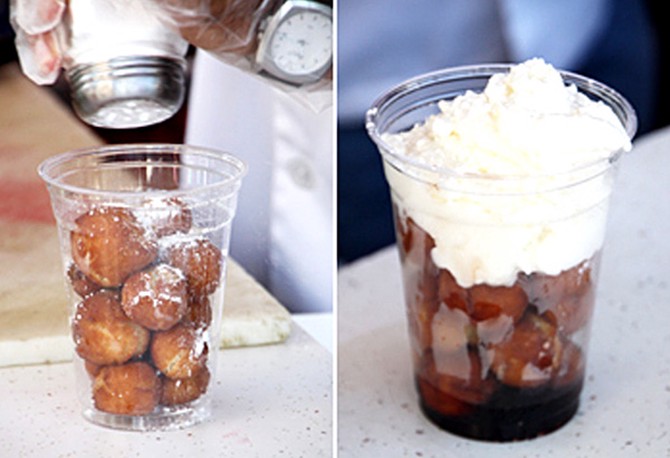 Fried Coke
Fried Coke won the State Fair of Texas' Big Tex Choice award for most creative in 2006. The fried part is not actually soda, but Coca-Cola–flavored batter that is deep-fried, covered in pure Coca-Cola fountain syrup and topped with whipped cream, cinnamon sugar and a cherry. 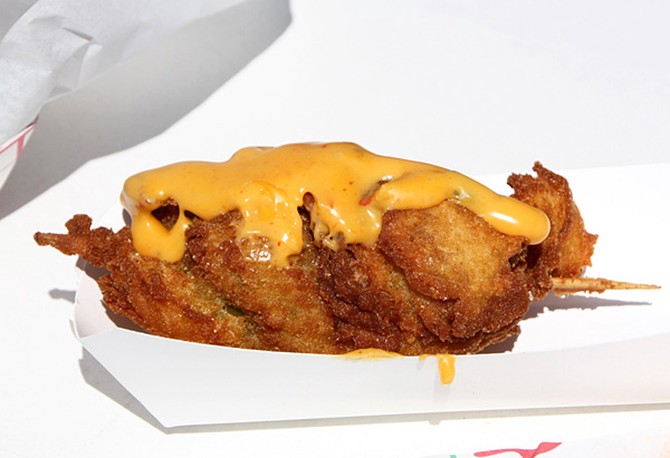 Green Goblin
How do you make a green goblin? Hollow out cherry peppers, stuff them with spicy shredded chicken and guacamole, then batter and deep-fry it all. Serve three to a skewer and top with queso. Green goblins were a finalist this year for a Big Tex Choice award. 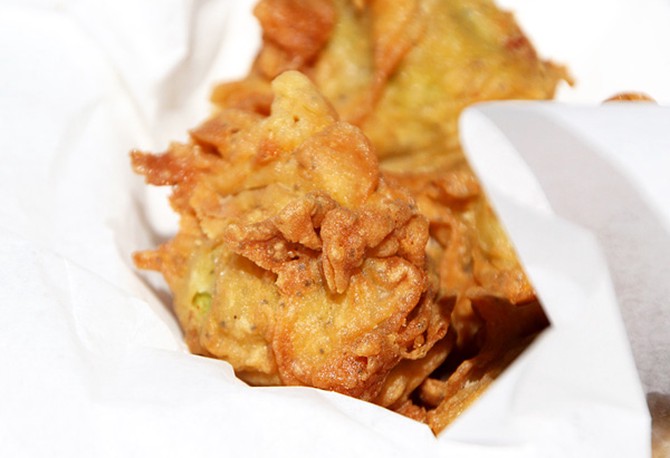