25 Years of Oprah and Gayle on The Oprah Show 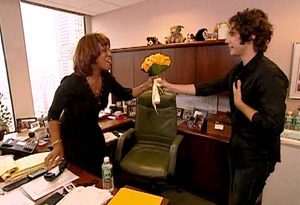 PAGE 8
In 2005, The Oprah Show's Wildest Dreams bus toured the country, making over 100 viewers' dreams come true. When it rolled through New York City, Oprah decided to pull a fast one on Gayle by fulfilling one of her wildest dreams—meeting singer Josh Groban!

It seemed like a normal workday for Gayle, who is the editor-at-large for O, The Oprah Magazine. The plan was for Oprah to call Gayle to make sure she was in her office when Josh arrived, but Gayle unexpectedly called Oprah first to talk about—who else—Josh Groban! "His voice does something to me," Gayle said. "I just feel him!"

While Gayle sang some of her favorite lyrics into the phone, Josh walked into her office holding a bouquet of yellow roses. "Oh my goodness!" she screamed. "Josh is here!"

"That was so much fun because Gayle has always been my biggest fan and greatest cheerleader and has always wanted the best [for me], because that's what besties do!" Oprah says.

More The Oprah Winfrey Show
Our Favorite Oprah and Gayle Moments of All Time
Oprah and Gayle Go to Yosemite
And They're Off
Road Trip All-Stars
Westward Expansion
Flying Through the Plains
Road-Trippers in Hobart, Tasmania
Southern Belles