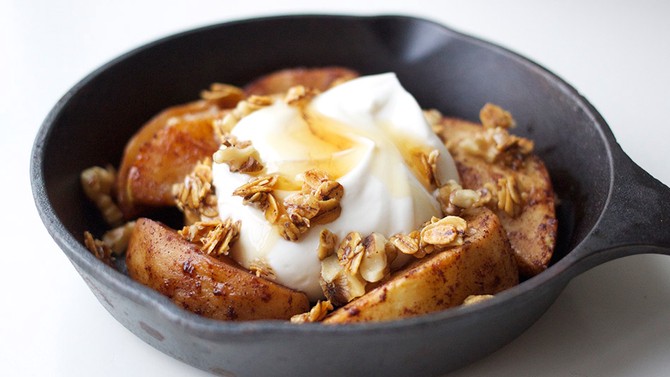 A Hearty Dish for People with a Sweet Tooth
A slice of pie with a cup of coffee may be one of the finest A.M. meals on the planet. And now it can also be one of the healthiest, thanks to this brilliant twist from chef Sarah Ashley Schiear, who has a knack for overhauling rich recipes with a light touch. She bakes apples with cinnamon, and then tops them with calcium- and protein-filled yogurt, as well as a toasted-oat and walnut topping, so you get the soft fruit, the warm spice, the crunchy contrast—and not that blah feeling an hour later.

Get the recipe: Apple Pie Sundae with Greek Yogurt and Toasted Oats 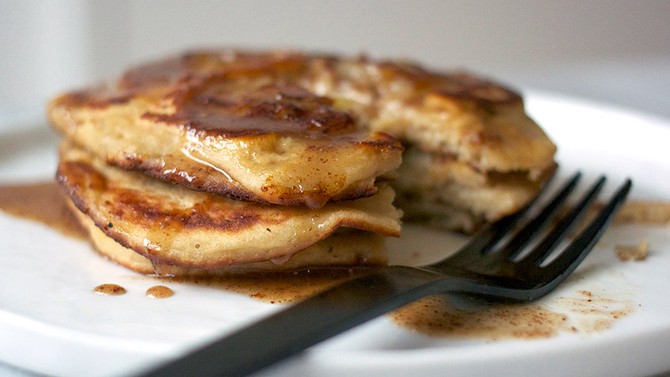 The Incredible 19-Cent Fruit Transformation
Caramelizing bananas turns the cheap, grocery-store staple into something otherworldly, and Schiear has figured out a way to do it without tons of fat and calories. She makes a pancake batter (plumped up with one mashed banana), and when she ladles it onto a griddle, she drops a couple of banana slices onto each cake. A drizzle of honey before flipping allows the fruit to caramelize as it cooks. And instead of syrup, she whips up a maple-almond sauce that's much more substantial than the usual topping (so you can use less).

Get the recipe: Caramelized Banana Pancakes with Maple-Almond Sauce 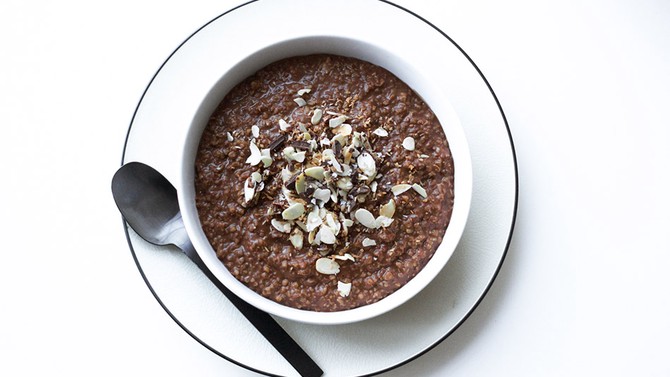 A No-Guilt Hot Cereal Delight
Schiear named this decadent-tasting spin on oatmeal after the classic candy bar Almond Joy. As with the best oatmeal recipes, there are two keys to getting it right: start with steel-cut oats (they stay chewy, not mushy), then choose your mix-ins wisely. Schiear uses milk, coconut, raw cacao powder (which brims with antioxidants, magnesium and iron), coconut oil and a dash each of sea salt and vanilla extract. Toasted, sliced almonds and dried coconut give the dish a little crunch.

The Luxurious (and Insanely Easy) Spoonable Treat
If you like rice or tapioca pudding, we can pretty much guarantee you will love this lighter cousin: It uses fiber-rich chia seeds to turn almond milk into a thick and rich custard. You simply mix the two together with a couple of flavorings (vanilla, syrup and the like) and let them sit for two hours (or overnight), stirring occasionally. The addition of maple syrup, cinnamon, diced persimmons and pomegranate seeds gives the breakfast a vibrant color and wintery flavor.

Get the recipe: Chia Seed Pudding with Persimmons and Pomegranate 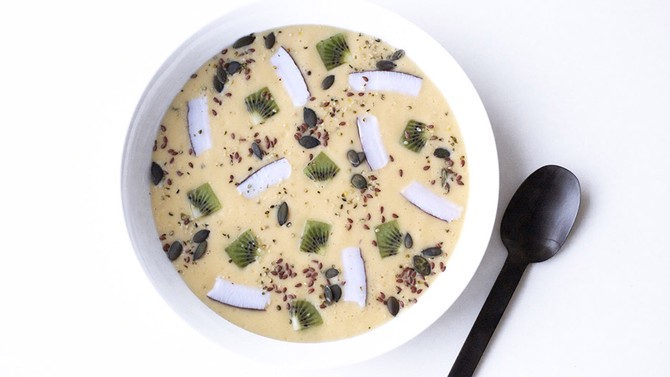 The Soft-Serve That's Meant to Be Eaten Before Noon
You may already be snacking on this cheater version of soft-serve, which is pureed frozen banana. To make this sweet heartier, toss in mango chunks and kefir (the probiotic drink that's great for digestion) or coconut milk, soy milk or another type. Blend until smooth, and then stir in magnesium-rich hemp seeds. Diced kiwi and sliced, raw coconut give the bowl a tropical feel.