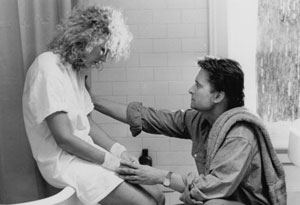 Credit: Paramount Pictures
Fatal Attraction is the 1987 blockbuster that struck fear into the hearts of married couples across America. Michael Douglas stars as Dan Gallagher, a married lawyer who risks it all for a passionate weekend with a seductive stranger named Alex (Glenn Close). This one-time weekend fling twists and turns into a harrowing roller coaster ride as Alex's demented obsession slowly reveals itself.

Michael and Glenn were exceptional in the sexy thriller, which received a Best Picture Oscar®nomination. Glenn also received a Best Actress nomination for her role. Throughout her stellar career, Glenn has earned a total of five Oscar nominations, three Tony Awards® and three Emmys®, including back-to-back wins for her work on Damages.

After Fatal Attraction, Michael went on to star in Wall Street as Gordon Gekko, the role that scored him an Oscar for Best Actor. In spring 2010, he will revisit that role in the upcoming sequel, Money Never Sleeps.

Michael and Glenn reconnected in New York City to talk publicly for the first time about the film, those steamy scenes and why Glenn didn't like the ending.