A Skeptic Explores the Science Behind Spiritual Experiences

Not long before the death of her beloved mother-in-law, Harriet Brown had a vision that was both confounding and deeply comforting. Inspired by that revelation, she set out to explore the theories and neuroscience behind it all.
By Harriet Brown 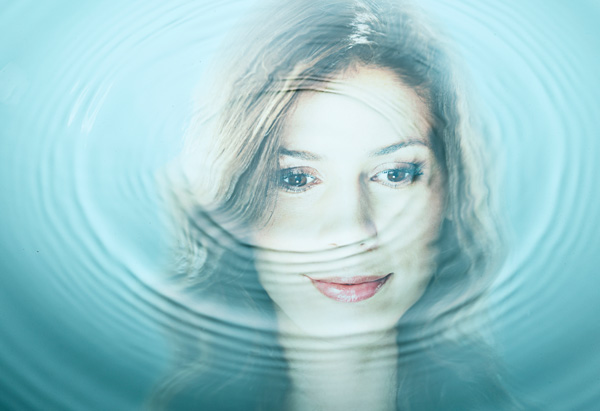 Photo: Dan Saelinger
I'm driving away from from my mother-in-law's house, crying. Vivian has been a mother to me in every way that matters, and now she's dying of cancer. For months my husband, brother-in-law, and I have been taking turns caring for her in her home. As I pull away this November morning, I know I probably won't see her alive again.

I cry and cry, and after a while a strange feeling bubbles up from my chest into my throat. It takes a minute to recognize it as joy, and I'm horrified—how can I feel joy at a time like this? But it's irresistible. I'm laughing and crying and all the while a small part of me is wondering what the hell is going on. And then suddenly I'm having a...for lack of a better word, vision. I'm not asleep; I'm not hallucinating; I know my name and the date and I'm still driving the car. But an image comes to me: I'm in an underground cavern, on the edge of a vast lake, looking at the water with the feeling of joy still bubbling up inside me, and somehow I understand that the water is actually love, and that love lies under every step I take. I understand that even though my mother-in-law is dying, I will never be alone or unloved. That I am inextricably, inexplicably connected to every living thing on the planet.

Five years ago, I didn't believe in spiritual experiences. Or at least I didn't believe I would ever feel anything transcendent or mystical. I knew others did, or said they did, but those people were seekers. They went to energy healers and astrologers. They prayed and meditated and maybe, I thought, talked themselves into believing they'd had an out-of-the-ordinary moment.

I wasn't that type of person. Though I'd love to believe in a higher power, I just don't. I'm a science journalist, an agnostic empiricist who appreciates the cultural aspects of being Jewish but not the religious ones. So when that image of water and love enveloped me in a sense of peace I'd never felt before, I didn't know what to make of it. It wasn't the sort of thing I could easily bring up with others; I couldn't imagine saying, "By the way, last week I had this vision—let me tell you about it!" Eventually, though, I described it to a friend who said, "It sounds like you've had a spiritual experience."

It turns out I'm in good company. According to a study at the University of Chicago, about half of all Americans say they've had such an experience, which might range from a sense of well-being while watching a sunset to a classic near-death journey. These occurrences are, necessarily, deeply personal and hard to articulate.. "What one person calls a religious experience—which could be intense and life-changing—another might call a simple ten-second prayer," explains Patrick McNamara, PhD, director of the Evolutionary Neurobehavior Laboratory at the Boston University School of Medicine.

But no matter what they're called, these events share certain characteristics. Andrew Newberg, MD, director of research at the Myrna Brind Center for Integrative Medicine at Thomas Jefferson University Hospital in Philadelphia, is one of a new breed of "neurotheologians" studying the intersections among our brains, religion, philosophy, and spirituality. Newberg surveyed about 3,000 people who'd had spiritual experiences and identified a few common elements. Number one was a strong sense of what he calls realness. When you wake up from a dream, he explains, you know it wasn't real, no matter how vivid it felt. Not so with transcendent experiences, which feel authentic not only at the time but years later.

Mona de Vestel, a creative writing teacher from upstate New York, still remembers a moment that literally changed her life nearly 30 years ago: At 16 I had pneumonia and typhoid fever. I knew I was dying. One afternoon I was lying in bed and heard the door open. I didn't open my eyes, but I thought, Mom's coming in. She sat on the bed; I felt the weight. She put a hand on my cheek, and I got the most powerful feeling of well-being. I felt that she was telling me, "You're going to be fine." Later, when she came back, I said, "When you came in earlier and put your hand on my cheek, it felt so good." And she said, "I didn't come in here." Around the time I'd thought she was with me, she was in the kitchen doing dishes and heard the rustling of clothes. She turned around, but no one was there. She'd been praying to her mother, who had died, to help.

De Vestel says that from that moment on, she began to recover, and her attitude toward the spiritual world shifted. "It's not just 'those people' who have 'weird' things happen," she says. "It's something that can happen to anyone."

Newberg also found that spiritual experiences usually occur during times of strong emotions—euphoria, fear, grief, or some combination, as I felt that day in the car. A third defining element is a feeling of connectedness, of not being alone. Spiritual leaders might interpret this as evidence of a higher power. Scientists tend to look for answers elsewhere: in the physical structure of the brain.

From the December 2011 issue of O, The Oprah Magazine

More Inspiration
4 Things We'd Like to See More of All Year Long
Genius Idea: Traveling With a Suitcase Full of Good
What Oprah Knows for Sure About the Joy of Teaching
Howl: One Writer Devotes Herself to the Survival of the American Gray Wolf
What Elephants Can Teach Us
How Harry Connick Jr. Lives His Best Life
The Ripple Effect of Oprah's One Act of Kindness
How to Embrace the Present Moment