When "I'm Sorry" Means "You're Wrong"

At work, the simplest phrase can have an unexpected meaning. It all depends on who's doing the talking.
By Deborah Tannen, Ph.D. 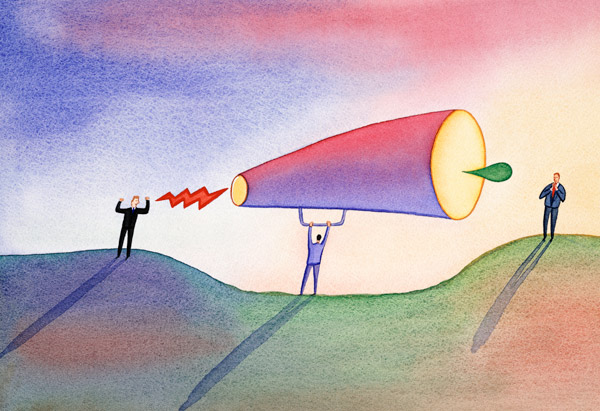 Illustration: Thinkstock
Conventional wisdom says good communication is largely a matter of talking—but the truth is that our assumptions and personal histories tint even the simplest words. In the following workplace scenarios, well-meaning people run into conflicts because they misconstrue what their bosses or colleagues are really trying to say.

The Suggestion You Can't Refuse


Eliza is planning a meeting; her boss says, "Let's get a list of attendees." This means "You do it." Many people feel that using let's is friendlier than giving an order.

The same goes for openers like "You know what I would do?" "You might..." and "You could..." If a peer or subordinate offers them, they're probably suggestions, but if they are used by a boss, they're best taken as directions—especially if the boss is a woman, because women often try hard to avoid appearing bossy.

When Francine, a bookstore owner, asks Janet, the manager, how she'd feel about helping the bookkeeper, Janet says, "I'll think about it." Francine is annoyed because her question really meant "Do it now." It was not an invitation for Janet to explore her feelings.

When "I'm Sorry" Means "You're Wrong"


Sue, a manager, says to Michael, "I'm sorry if I forgot to tell you about that meeting." This means "I told you about the meeting. You owe me an apology." Sue is making the first move in a two-part ritual: I apologize for X, then you apologize for Y. She expects him to say, "You did tell me. I'm sorry. It won't happen again."

Had Sue actually forgotten to tell him, she'd have been more contrite: "When I didn't see you at the meeting, I thought, 'Oh my God, I forgot to tell him!' I'm so sorry. I can't believe I did that...."

Apologies are minefields because "I'm sorry" can mean anything from "I want you to apologize to me" to "I'm sorry that happened, but it wasn't my fault" to "I truly regret my mistake"—so beware of responding automatically.

The Sex Differences in Small Talk


Mona spots Lena, a co-worker, in the hallway.

Mona: Oh, you got your hair cut!

Lena: Yeah, what do you think?

Lena: Really? It's not too short?

They continue talking. Here, "Oh, you got your hair cut" means "I feel friendly."

But when Mona tries this opener with Carl, something else happens.

Mona: Oh, you got your hair cut!

Carl wonders, Why did she say something so obvious? Mona thinks he's cold.

Another scenario: Carl says to Lena, "What happened to your hair? It looks like you got it caught in the lawn mower." This means "I think you're cool." Men often trade insults to make small talk. Unfortunately, Mona may misinterpret it and think he doesn't like her.

Never assume words have a one-size-fits-all meaning. Look at body language, listen to tone, consider motives. When you operate from the premise that everyone's inner life is as rich and complex as yours, you'll find that not just your work life but your personal life will thrive.

More Ways to Communicate Well
From the November 2000 issue of O, The Oprah Magazine

More Inspiration
How to Get What You Really Want (at Work)
What Oprah Knows for Sure About Trusting Your Instincts
Adventures in Kindness: Be Excellent to Each Other
6 Times When You Must Trust Yourself
The Surprising Skill Successful People Have in Common (and How to Cultivate It)
How Does Your Daily Routine Compare to Beethoven's?
What the Happiest People Do at Work
How Rachel Roy Lives Her Best Life