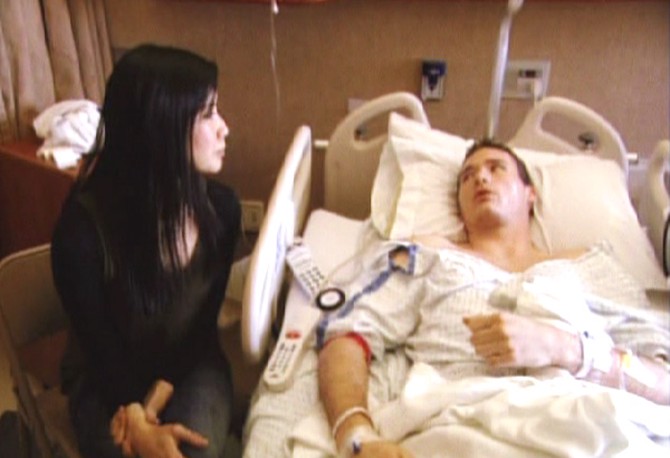 3 of 17
One day after the shooting, Lisa was granted exclusive access inside Carilion New River Valley Medical Center, where four injured students were taken. She meets Colin Goddard, a junior who was in French class when the gunman entered and started shooting.

It was about 9:30 a.m. when Colin says his class heard loud banging outside the door. "It got louder and it got closer, and it was very, very rapid in succession," Colin says. "So [the teacher] poked her head out. Immediately she pulled it back in with a terrified look on her face, told us all to get on the ground, call 911."

Colin immediately called 911 on his cell phone and told authorities where they were. Then, he says, bullets started coming through the wooden door and Cho Seung-Hui kicked it in. "Then I just looked on the ground and acted like I was dead," he says.

Colin says he never saw the gunman's face, nor did he ever hear him speak. "I saw his boots, I saw his pants, I saw his shirt, and I saw two holsters over each of his shoulders, pistol holsters, and then that's as much of him as I wanted to see. I didn't want to make eye contact," he says. "I thought if I looked at him, then he would know I'm here, I'm alive, I've seen you, and I think I would be in a lot worse position than if I had done that."

Colin says he remained silent as the gunman walked through the rows of desks, shooting people at random. He came to Colin's side of the room and shot two people before Colin says he was shot in the knee.
Published 01/01/2006
PREVIOUS | NEXT
More The Oprah Winfrey Show
15 Most Frequent Celebrity Guests
15 Favorite Funnymen
14 Stories of Overcoming the Odds
The Egglestons Mean Business
Ali MacGraw's Timeless Style
Remembering Nelson Mandela: 1918–2013
A Look Back on Oprah's Favorite Things
6 Unforgettable Oprah Show Reunions