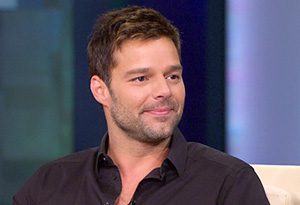 PAGE 8
After meeting Baby Wave, Ricky felt it was time to become a father. "I think I always wanted to be a father," he says. "I had a beautiful relationship with my dad and beautiful memories."

Ricky decided to use a surrogate. His used his sperm to fertilize eggs from an anonymous donor that were then implanted into a different surrogate mother. Neither the egg donor nor the surrogate knew that Ricky was the father. "There are open adoption and private adoptions. We can do the same thing in surrogacy," he says. "Some mothers who are carrying the babies prefer it that way. And my case was like that."

During the surrogate interview process, Ricky spoke on the phone to the woman who would eventually carry his children. "I said, 'Why do you do this?' And she said, 'Because I'm a very spiritual woman, and I've never felt closer to God than that moment where I can give the gift of life to someone that cannot do it on his own,'" he says. "'I said, 'You are the one.'"