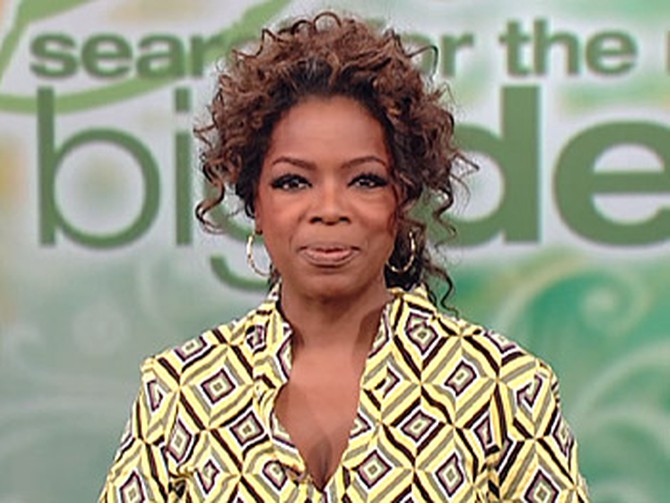 In February 2007, Oprah teamed up with QVC, the world's largest televised shopping network, and launched her search for the next big idea.

Over the next three months, more than 6,000 innovative men and women traveled to conventions in Chicago, Los Angeles and Philadelphia to pitch their products.

The inventors may have shared a common dream, but every idea was unique. The QVC judges saw everything from inventive ideas for the home—like a backyard breeze ceiling fan mister—to luxuries for the loo.

Entrants had just 10 minutes to convince the judges that their ideas were best-sellers, but only eight could move on to the final round!

Now, the final decision rests in the hands of Oprah's audience. To help them pick a winner, Oprah has brought in two celebrity judges who aren't afraid to speak their minds! 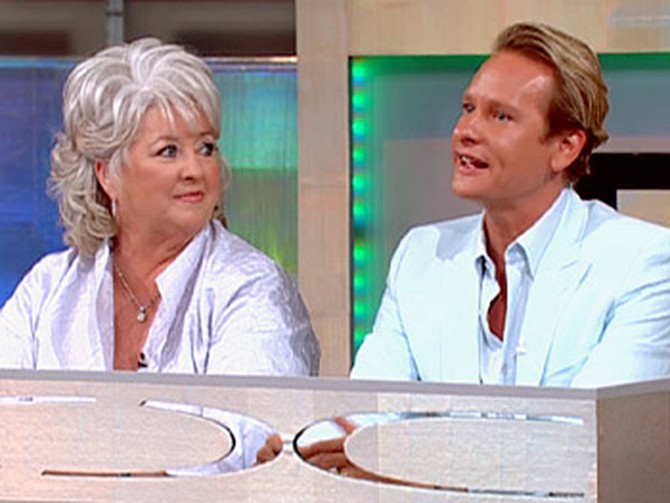 Paula Deen, Food Network's queen of Southern cuisine, and Carson Kressley, the feisty fashionista from Queer Eye for the Straight Guy, know a little something about the homeshopping business.

Paula took her love of food to QVC, where she sells everything from cookbooks to Smithfield hams! Carson's passion for fashion inspired him to create his own clothing line, Perfect, which he launched on QVC in November 2006.

Now, Paula's and Carson's products are some of the shopping network's biggest hits!

After years of entertaining audiences on hit shows, Carson and Paula are comfortable pitching products to millions. What advice do they have for finalists facing the cameras for the first time?

"The most important thing is to have fun," Paula says.

Carson says the final eight shouldn't think of their time in the spotlight as a sales pitch. "You're telling a love story," he says. "You've invented this product and you know everything about it. Don't worry about selling it. Worry about loving it and telling everybody how great it is." 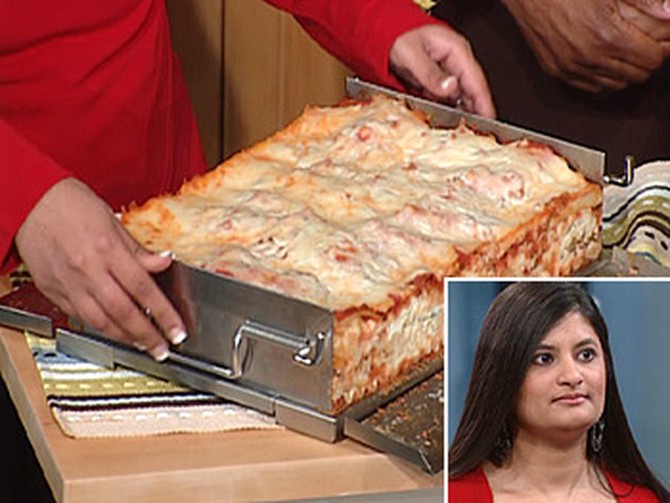 The first finalist, Aneela, says she came up with the idea for her kitchen invention when she was a newlywed. Aneela says she spent hours preparing lasagna to impress her husband, but when she tried to get it out of the pan, the perfect square she envisioned ended up a saucy mess.

Aneela decided to invent something that would solve her dinner dilemma—the Lock 'N' Bake Baking Pan! "It is a baking pan that is designed for easier removal of food," she says.

This pan may look like a typical kitchen product, but if you push down on the handles, all four sides fold down, making the food more accessible. Aneela says you can also bake a cake in her pan—and by removing the sides, you can frost it without having to flip it out onto a cake plate!

Paula, a woman who knows her way around the kitchen, says she loves Aneela's invention.

Although Carson isn't much of a cook, he says the Lock 'N' Bake seems useful and simple to use. "I've never baked a cake, but that looks much easier that way," he says. 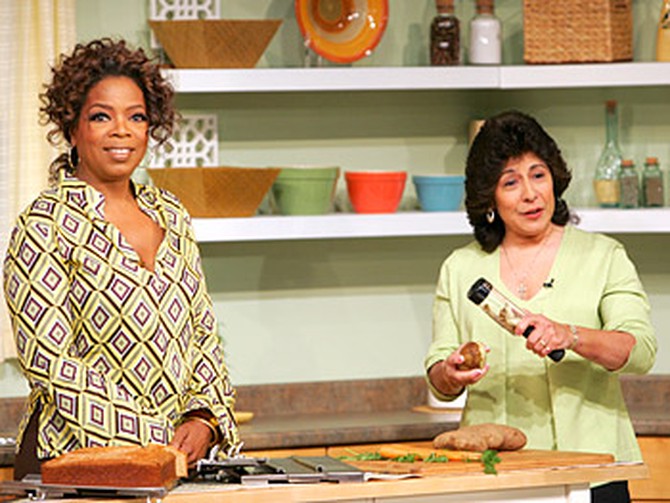 If you're sick of potato peelings and carrot scraps littering your kitchen floor, Annette's invention is for you. The Veggie Peel is a peeler that stores scraps in a small chamber, where they stay until you discard them!

"I got so tired of the mess that normal, common peelers made," Annette says. "[The Veggie Peel] keeps your hands free of bacteria from dirty garbage pails, and clogged drains are really a thing of the past."

The blade on the Veggie Peel is also double-edged, so it's convenient for people who are left-handed or right-handed, she says.

"I think this looks very appealing," Carson says. "I've peeled carrots at home, and it's like shrapnel…there's a carrot on your head. It's all over your cabinets." 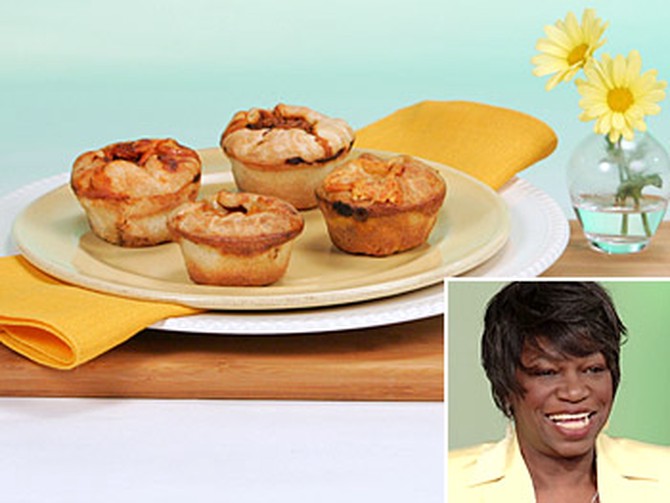 Sharon, who owns a restaurant in Staten Island, New York, has come up with an easy way to bring her culinary creations into your home. The Brunch Biscuit comes in four flavors—spinach lasagna, spicy sausage and pepper, turkey with red-eyed gravy and sweet potato. All you have to do is heat it up in the microwave for one minute. "It doesn't change the consistency at all," Sharon says.

Paula has sold food on QVC and thinks it's a great idea. "Personally, I love the idea of selling food because you eat it. It's gone. You eat it again," she says. "The sausage and peppers is fabulous."

Sharon says winning would be an amazing achievement. "I came from the projects in Harlem, so you know how deep it is for me," she says. 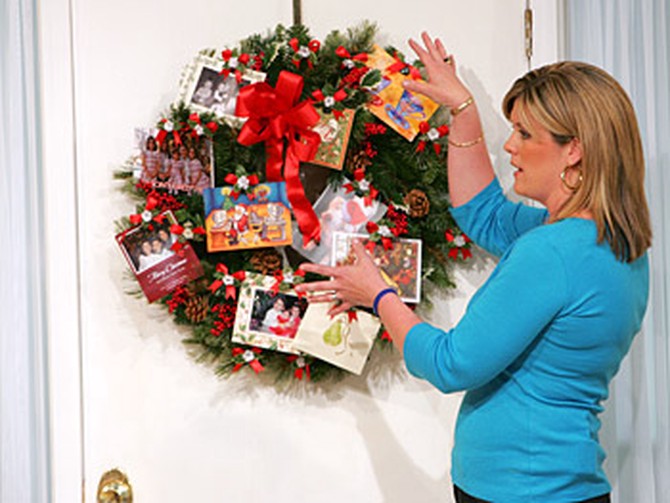 Maria's big idea is a product called Garland Greetings. It's a hand-decorated wreath with clips hidden beneath bows to help you display holiday cards and photographs. "The biggest question you get when you receive that holiday card is, 'What am I going to do with it?'" she says. "Here they are presented with love, affection, beauty. It's a way to symbolize what it means to you."

Carson says he loves to send cards and lines the ones he gets on a buffet table…only to have them fall over like dominos. "I love this. I think it's useful and fun and it's really appealing to the QVC customer," he says. "I'll take 14!"

What would it mean for Maria to win? "I think to share Garland Greetings, to share Christmas, to share the holidays with everybody would be the dream of a lifetime—to be able to help decorate and help get people's Christmas cards up and beautiful," she says. 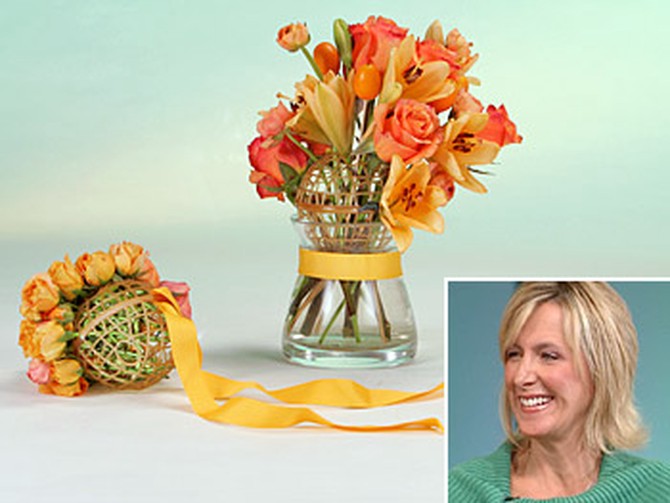 Lori says her product can turn anyone into a flower-arranging pro! The EZ Bouquet is a round plastic ball with a built-in grid that fits the stems of your favorite flowers. The ball, which comes in two sizes, works in standard vases—or, you can make pomander balls! Just place a flower in each of the grid openings, and you've got an arrangement. "I love flowers and thought I needed something that was easier," Lori says.

Carson's on board! "Anything to do with flower arranging, come on, I'm all over," he says. "I think it's great because it makes it easy and it allows people to really have fun doing it and everybody gets great results."

Paula says she loves having fresh flowers in her home. "That would make it so easy and so simple," she says. "I really, really like it." 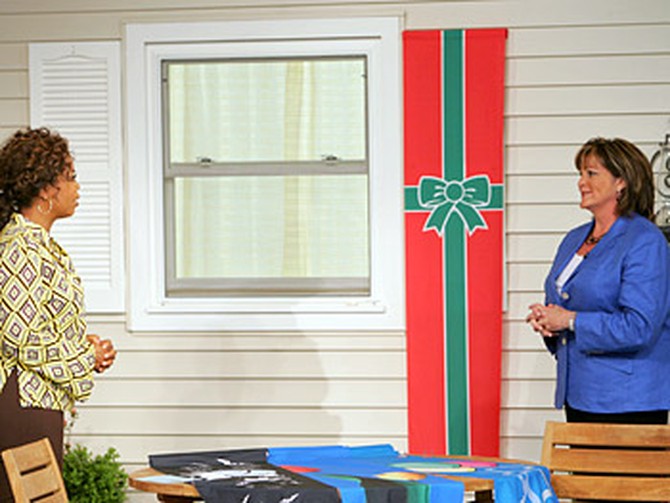 Mimi has an idea that could open a window of opportunities for her! "The name of my invention is the Original Shutter Covers," she says. "It takes a typical, kind of frumpy, faded … shutter, and can help you celebrate anything that's going on in your life—whether it's a holiday, whether it's just a birthday," Mimi says. The interchangeable covers can decorate any shutter between three and six feet long. On the top of the panel there is a clip to easily attach the design of your choice. They are also weatherproof and fade-proof!

Carson and Paula come on stage to have a closer look at the covers. "I didn't want to like these, but you sold me," Carson says. "You're so enthusiastic about them. It's your passion."

Paula agrees. "I'm like Carson," she says. "Everybody may not have shutters. But when they see this, they'll want to put up shutters."

What would winning mean for Mimi? "I think if I won it would prove to me and to my kids and to everybody out there that anything really is possible," she says. "If I can go from being a nurse to inventing something, anybody can do anything." 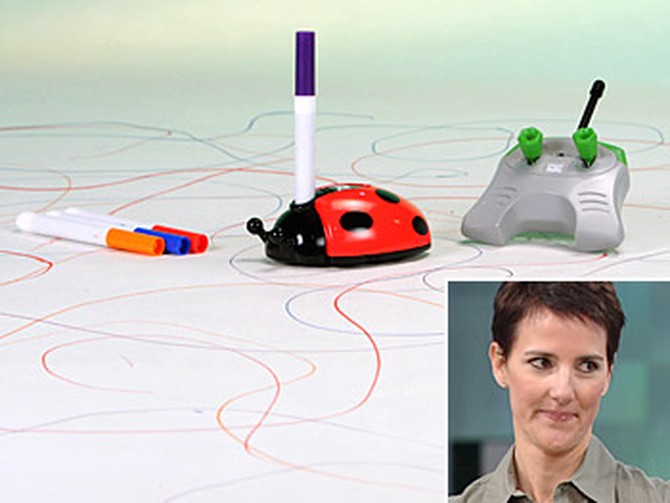 Looking for a fun way to help your kids create art? Gwen's invention, the Color Bug, is the first radio-controlled art product on the market! Kids just have to snap in a washable marker, place it on a drawing surface and use the remote to control the bug. "They become the next mini-Picasso," Gwen says. It's also a toy that will appeal to both boys and girls because it comes in red, blue and pink.

The Color Bug is an invention that Gwen says she's been dreaming about since she was in art school 10 years ago. She had to create a toy that moved 12 inches and was inspired by watching her dog scoot across the floor.

Carson says he was mesmerized watching the Color Bug in action. "It's a novelty, which is, for QVC looking for something that's new and innovative, it's certainly that," he says. Paula says she would even buy this toy for her 8-month-old grandson when he gets older!

Gwen says winning would set an amazing example for her own daughter. "I was raised to dream, and a lot of people told me that I couldn't do this," she says. 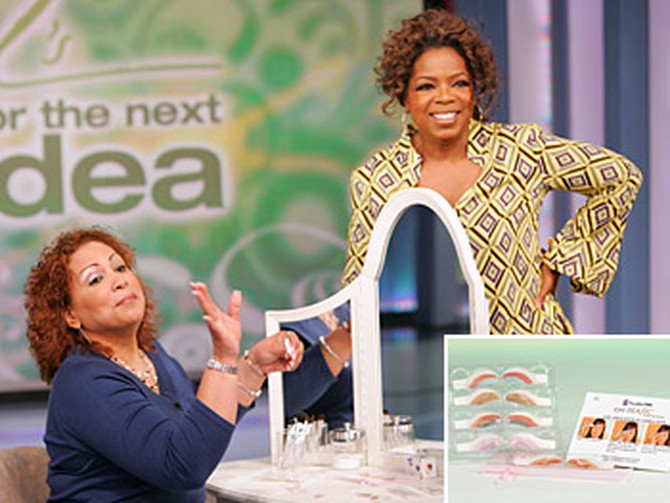 Myra says her product, Eye Majic, can help your makeup look like it's been done by a professional. "I used to work at a makeup counter and … the number-one, most difficult problem they used to have was with eye shadow," Myra says. "I mean, you get the little pots with the bunch of little shades, and you have to try and figure out how to combine them."

So Myra came up with a preloaded, biodegradable color applicator for both eyes. "You take the applicator, you close your eye, you press, and you drag, and you blend," she says.

Paula and Carson have to try it for themselves! "I was skeptical," says Carson, who's sporting a sea foam green look. "I wouldn't recommend it for men, but it really makes my eyes pop," he jokes. "It's an idea that makes women's lives easier and I think that's a good thing."

Myra says she hopes to empower women if she wins. "I was raised by a single mom in Puerto Rico, and I had my first child when I was 18 and I have three girls now," she says. "I never thought in a million years that I would do anything like this." 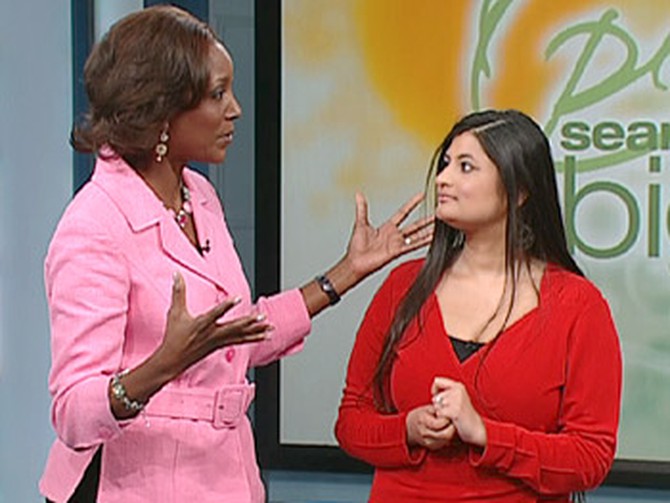 Now it's the moment all the contestants have been waiting for! Oprah asks the audience to vote for a winner on the following criteria: the creativity of the product, how well the finalist presented their idea and how well they thought the idea would sell. After the audience votes on handheld devices, the big winner is…Aneela's Lock 'N' Bake pan!

As the big winner, QVC program host Jayne Brown says Aneela will have the opportunity to appear on QVC, which reaches 90 million homes! "But we're not going to leave you hanging," Jayne says. "We're going to walk you through the process. We're going to find some help for you with manufacturing and help you move through that if you need it." QVC will also feature the Lock 'N' Bake in a commercial and on its website. "It's a partnership, and we are so glad to have you," Jayne says.
Published 01/01/2006
More The Oprah Winfrey Show
Honoring Everyday Heroes
Tribute to The Oprah Show's Audience
Weight Loss Finale: New Bodies, New Lives
The Oprah Show Guests We Can't Stop Talking About
Paying It Forward
10 Memorable Harpo Hookups
The Winner of Oprah's Big Give Returns with a Surprise
The Egglestons Mean Business