Get the look of luxury with these surprisingly easy and affordable design ideas from the new book, Hotel Chic at Home.
By Sara Bliss 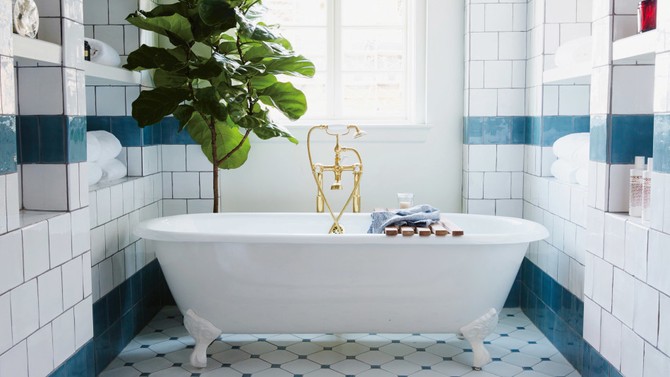 Focus on the Finishes
New to the market are modern, sculptural bathtubs that complement contemporary spaces as well as retro-inspired silhouettes that work with classic rooms. The range of materials and finishes is staggering: stone, wood, marble, copper, bright paint. 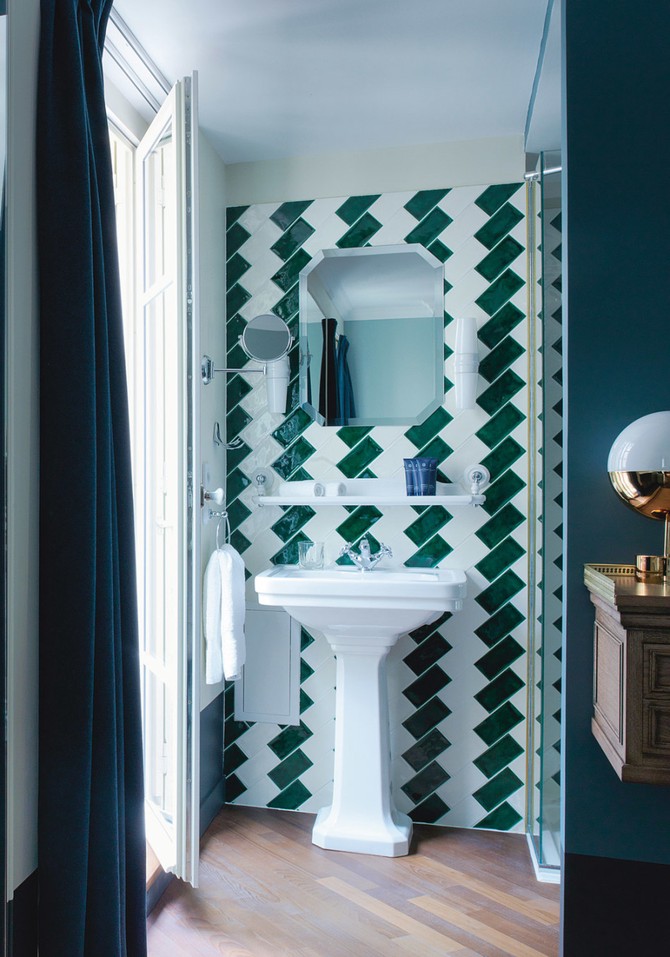 Put a Fresh Twist on Tile
White subway tile is a default choice for bathrooms because everyone assumes it's easy and inexpensive. Boutique hotels offer some interesting alternatives, and most won't actually cost more—all that's needed is to think creatively. In the Hotel Bachaumont in Paris, designer Dorothée Meilichzon cleverly used sheets of penny tiles, usually relegated to floors, on walls. The inexpensive tile sheets look chic when trimmed with a gold border and coordinating paint on the walls. 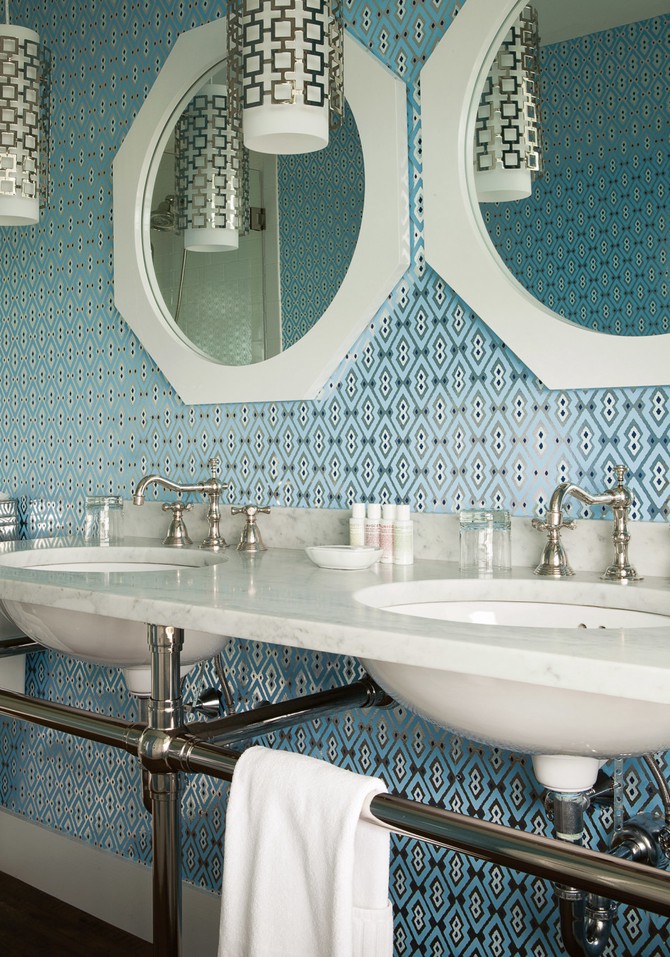 Add a Graphic Design Statement
Many bathrooms are often smallish spaces, so it really only takes one bold design statement to make an impact. It also sounds counterintuitive, but a small room allows you to get away with using a really strong pattern in a way that would overwhelm a larger space. A simple way to add pattern to a bathroom is to turn to wallpaper—nothing dictates mood quite as well. Florals can bring in an English country house demeanor while an explosion of graphic patterns can add edginess. At the Tides Beach Club in Kennebunkport, Maine, designer Jonathan Adler covered the bathroom walls in a metallic graphic print of blue and silver. Matching a playful wallpaper with a classic sink design makes the space look fresh. 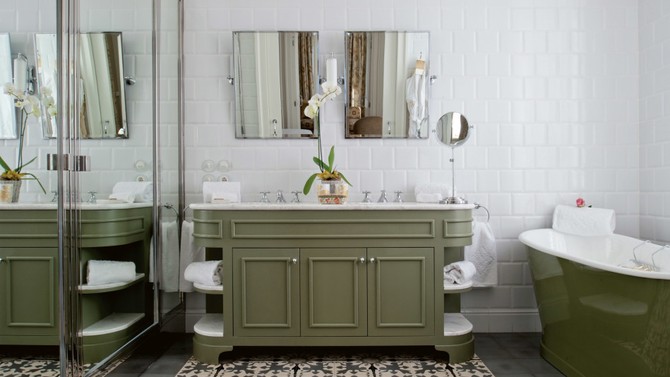 Update Your Basic Whites
White is the safe, obvious and timeless choice for bathrooms. But how do you keep an all-white bathroom from feeling unoriginal? A cement tile floor with a mosaic pattern and a coordinating sage-green tub and cabinet add muted color and pattern to a bathroom with white tile and walls at the Vidago Palace in Portugal. 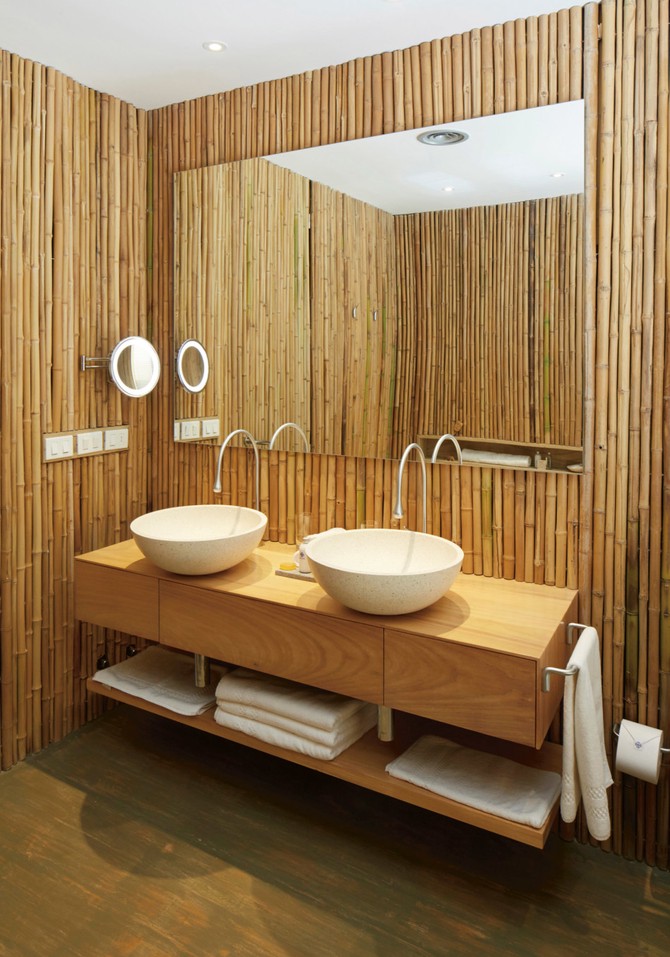 Make It Feel More Zen
When you shift from thinking about a bathroom as simply a functional space to one that's about relaxing and recharging, your whole perspective on its design changes. Creating a space that feels both calming and beautiful becomes the priority. In this bathroom at the Bahia Vik in Uruguay, walls are covered in bamboo instead of the more expected tile for a bathroom that feels like a tropical retreat. By only using one natural material, the overall effect is calming. 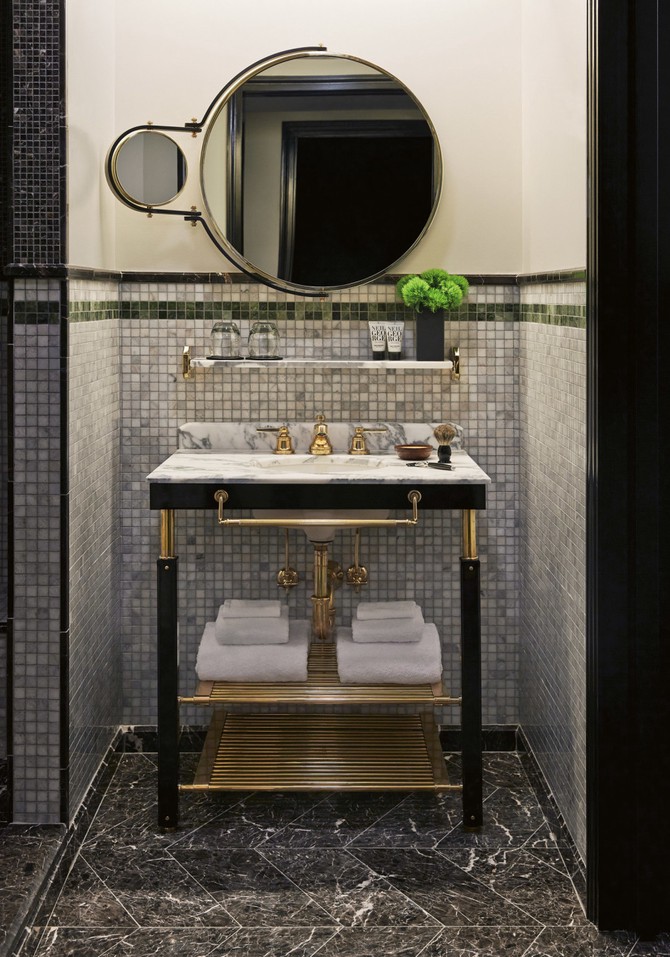 Choose Elements with Drama
It can be hard to define exactly what makes a space look masculine. The obvious criteria are an absence of flourish and frill and an emphasis on profile and solid-feeling materials. Small, square mosaic tiles with a stripe of color at the Viceroy Central Park in New York have a more urban sensibility, especially when paired with a console sink. Perhaps it is the trend of the moment, but brass fittings also seem to turn up frequently in bathrooms that would be at home in the most James Bond-worthy bachelor pads. 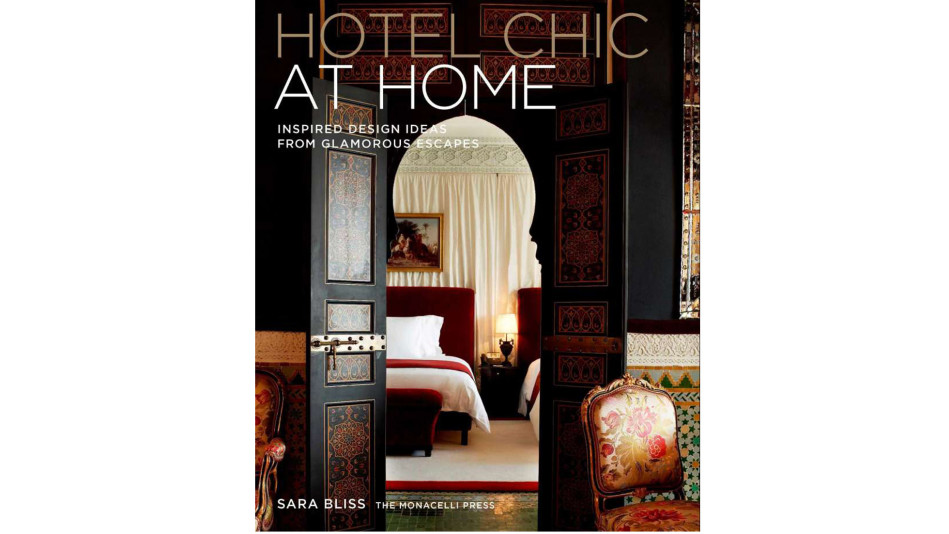 Excerpted from Hotel Chic at Home by Sara Bliss. Copyright © 2016 by Sara Bliss. Reprinted by permission of The Monacelli Press.
Published 02/23/2016
More Home
The Most Popular Decorating Ideas in America
7 Low-Cost Ways to Update Every Room in Your Home
The 8 Prettiest Holiday Front Doors
5 Dream Bathrooms
How to Make Any Bathroom Look Bigger (and We Mean Any)
20 Easy and Beautiful Thanksgiving Table Décor Ideas
Coming Home: Iyanla Vanzant's Home Makeover
The Glamorous Color That Enriches Everything