From Animagi to Zonko's: The Harry Potter Glossary 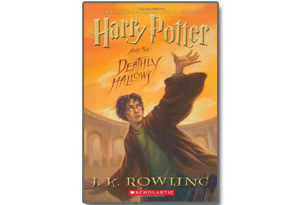 Brush up on all the terminology you need to survive in the Potterverse.
Animagi: Wizards who can morph into animals at will. The skill can be taught, and a wizard usually take the form of his Patronus.

Apparate: A wizard's ability to teleport himself from one location to another. Apparition requires a license from the Department of Magical Transportation that cannot be obtained until a wizard is 17 years old.

Azkaban: Considered the worst of all wizarding prisons. Under the watch of Dementors, most prisoners eventually go insane and die a slow death.

Basilisk: A giant serpent bred by wizards who dabble in the Dark Arts.

Bernie Bott's Every Flavour Beans: Much like Muggles' Jelly Belly jelly beans, these candies come in many unusual flavors. Unlike the Muggle candies, however, some of the flavors are disgusting. Flavors range from chocolate and peppermint to liver and vomit.

Butterbeer: A popular beverage served in Hogsmeade and said to taste a bit like butterscotch. Despite the name, the alcohol content is very low.

Centaur: A magical creature with the head and torso of a man, but the body and legs of a horse. Centaurs reside in the Forbidden Forest.

Daily Prophet, The: The most respected newspaper in the wizarding world.

Death Eaters: Supporters of Voldemort who believe in a society of pure-blooded wizards only and who employ Dark Arts to achieve that aim.

Defense Against the Dark Arts: A course at Hogwarts school that teaches students to defend themselves against evil creatures and Dark Arts.

Dementors: Guards at Azkaban prison who are also employed to protect Hogwarts in states of emergency. Dementors drain wizards of happiness and hope and thrive in despair. The dreaded Dementor's Kiss will suck out a human's soul, leaving an empty shell.

Forbidden Forest, The: The dark woods that border Hogwarts. Home to centaurs, unicorns and hippogriffs. Off-limits to students without supervision.

Gryffindor House: One of the four houses in Hogwarts. Students in Gryffindor are characterized by bravery, daring, nerve and chivalry.

Hippogriff: A magical creature that is half eagle (head, front legs and arms) and half horse (body, hind legs and tail).

Hogsmeade: A magical, all-wizarding village filled with restaurants and shops. Hogwarts students who are in their third year and above and have received a guardian's permission are allowed to visit.

Hogwarts School of Witchcraft and Wizardry: A seven-year school for young witches and wizards hidden from the Muggle world by the most powerful spells in existence.

Horcrux: An object in which a wizard can hide a piece of his soul in hopes of achieving immortality. Making a Horcrux is the darkest art, as it requires acts of violence and evil in order to succeed. Splitting one's soul in order to create a Horcrux is against wizarding law.

House-elf: A magical creature with bat-like ears and bulging eyes the size of tennis balls. House-elves work as dedicated servants to one master or to wizarding houses at Hogwarts. A house-elf can only be set free when its master gives it a piece of clothing.

Hufflepuff: One of the four houses in Hogwarts. Students in Hufflepuff are characterized by patience, loyalty and fair play.