How to Get Into the Swim of Things 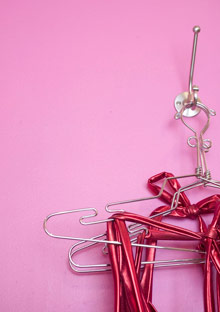 Photo: © 2009 Jupiterimages Corporation
Is self-consciousness keeping you muu-muu'd on the beach? Let this not be the summer of your discontent.
It's just about swimsuit season! What, not celebrating? Maybe that's because you've already begun to hear the drumbeat: Drop ten pounds by summer and eliminate unwanted body hair or varicose veins or some other feature deemed unsightly. According to many ads and magazines, it's time to take inventory of your body. And to find it flawed. And then to try to rid yourself of the flaws before you slip into a bathing suit.

This year I'm letting other people torture themselves in pursuit of perfection. I'm setting my sights differently. I'm aiming for the chutzpah of the woman with the generous curves in the two-piece who's happily sitting by the pool, the woman who doesn't let fear of being seen in a bathing suit get in the way of a cool dip on a hot day.

Some lucky women have their mothers to thank for that attitude. "I never understood the hysteria about wearing a swimsuit," says Jean Cooper, a reasonably fit 34-year-old insurance executive. "I attribute that to my mother, who never gave in to it either. She wasn't thin, but she had a great sense of style. She wore swimsuits all summer long and never once complained about her thighs or stomach. Consequently, I never thought of myself in terms of body parts." Jean is blessed with what psychologists call low public self-consciousness.

"It's a personality trait, and it's most often found in people who have a stubborn, independent streak," says Anita Barbee, PhD, associate research professor of social work at the University of Louisville in Kentucky, who has conducted many studies on women in society, and on relationships. "These people don't crave affirmation or reassurance from others, and they just don't worry about being judged by their appearance."

Then there are those of us who are set free in a lightning-bolt moment. Amanda Reed, a 28-year-old book editor, had a beach blanket breakthrough. "I was always the one in my family who stayed on her towel and hid under a big coverup. One hot day, I was sitting on the beach in my bathing suit and a T-shirt, sweating—I mean really sweating. And finally, I ripped off the shirt and walked down to the water and swam. All I could think was, "What took me so long?"

If you're still waiting to be overcome by body love (or at least body like), there's hope. "For many people, self-consciousness decreases with age," says Barbee. You become more satisfied with yourself and with your accomplishments, and eventually you become less focused on the appearance issue. As Kathleen Jamieson, a 36-year-old women's apparel store owner, says, "You look around and you realize, Hey, I may not look like I'm 18, but I don't look any worse than other people my age. In fact, I look pretty good." You start to recognize your assets and write off the rest. "I may not be perfect, but I have nice shoulders," says hairstylist Dena Vranas, 48. "Now I'm wearing a halter-style suit. I think I look good." Kerrie Andrews, 29, a pharmaceutical sales rep, says, "I've got a short, athletic build, and I feel fine in a tankini."

If it's still hard to get to the dressing room, try a reality check. "Remind yourself that feelings aren't facts," says Scott Trotter, a licensed professional counselor in private practice in Charlotte, North Carolina. Feeling: You're anxious about the way you look in a bathing suit. Fact: No one is as concerned about it as you are. Don't let anxiety hold you back. Get motivated by imagining yourself—just as you are—at the pool or beach having a good time, says Trotter. Whenever you start to feel uncomfortable about your appearance, think of the happy scenario. Soon you may find yourself, like the women on these pages, celebrating summer...in a swimsuit.

Get the best swimwear brands for every shape and size

From the May 2003 issue of O, The Oprah Magazine

More Fashion & Beauty
Step Right Up: Fabulous Fashion Goes to the Circus
Warm-Weather Basics with 2010 Flair
Behind the Scenes with Lake Bell
Adam Glassman's 7 Rules for Wearing White Right
Behind the Scenes: Mandy Moore's O Photo Shoot
O's Get Out of That Rut! Makeovers
Spring's Big Colors for Under $100
Glorious Spring Florals