Behind the Scenes with Maria Shriver, Guest Editor of O's Poetry Issue

How O's first-ever poetry issue was made. 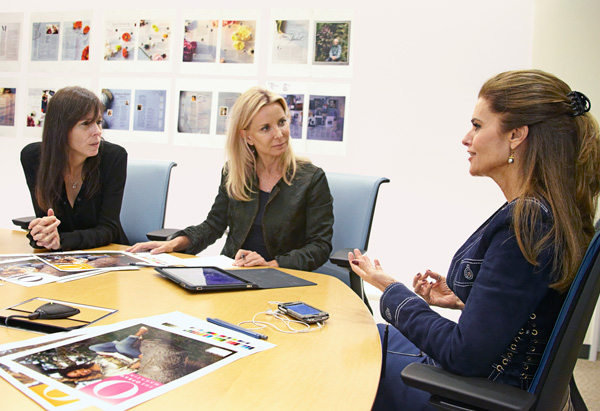 Photo: Nicky Woo
In early February, an O team made up of editor in chief Susan Casey, deputy editor Lucy Kaylin, and associate editor Kristy Davis flew to Los Angeles to talk poetry with guest editor Maria Shriver. And where better to do it than at the headquarters of OWN: Oprah Winfrey Network, on Wilshire Boulevard, where the group taped mock-up pages from this month's issue to the wall, featuring subjects as diverse as Maya Angelou, Demi Moore, and General David H. Petraeus, all discussing poetry, quoting poetry, reveling in poetry. Shriver, who's made her considerable mark in the fast-paced world of television journalism, adjusted instantly to the very different rhythms of magazine editing, poring over photographs and layouts and suggesting headlines for the stories. "Poetry has always been made to seem kind of cultish," Shriver said, as the editors were refining the issue's themes. "But the truth is, everybody really loves it! It's much more mainstream than anyone thought."

Once Oprah asked her to help create this issue, Shriver was full of ideas, inviting her brother Timothy and friends like Kate Capshaw and Bono to offer up their favorite poems. Last fall, while wrapping up her duties as First Lady of California, Shriver even found time to fly cross-country to Florida's Atlantic Coast to interview Mary Oliver, one of her favorite poets, for a revealing Q&A. Shriver was so at home in the role, in fact, that Casey asked if she'd like to join the magazine's masthead. To which O's newest contributing editor gamely replied, "Sure!"

More Inspiration
How Maria Sharapova Lives Her Best Life
Why Poetry Can Save Your Life
Grace Paley on How to Tell a Story
See How O's April 2015 Cover Was Created
Self-Help Advice That Works
The Perfect Book for Every Mood
Badass 11-Year-Old Started a Book Drive for #1000BlackGirlBooks
Puppies, Babies and More: Photography to Lift Your Spirits