A River Flows Through Us 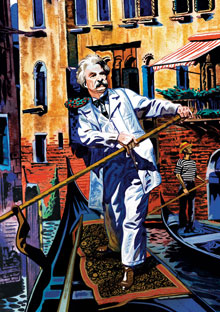 Illustration: Jeffrey Smith
Her worldly 12-year-old wasn't the sort to read Tom Sawyer. Or was he? So his mother pulled a fast one. Sneaky girl! The author forms a classic bond with her boy.
It was with a certain timidity that I began reading Tom Sawyer to my son, Charles. We live in Italy, and Charles at 12, with a smudge of nascent mustache, is one of those jaded bicultural kids now produced in such quantities by this shrinking planet: Half Italian on his father's side, half African-American on mine, he spends vacations in the States or traveling in Asia and Africa on a passport that has more stamps than Grand Theft Auto has cheats. He's a passionate reader, both in Italian and English, but compared to the sensational premises of the books he suddenly started devouring after James and the Giant Peach, Tom Sawyer seemed parochial, overly homespun, just plain small. Yet it seemed to me that a childhood without this book had a dead spot in it. I certainly didn't want him discovering it on a reading list for a college course entitled something like "Myth and Platonic Motif in Mark Twain."

So I resorted to trickery. One September morning, as we waited down at the end of our driveway for the bus from the International School to appear down the road, I pulled Tom Sawyer out of my pocket and said that though he was far too old to be read to, I needed practice for an upcoming book tour. As Charles gave me a cut-the-crap look, I added craftily that it would be useful in his often-described future career as dictator of the Western Hemisphere (12 is a power-hungry age), as it was an American classic, a key to the hearts and minds of future subjects. Then I quickly started reading, not at the beginning, not even at the whitewashing episode, but at a point that instantly chimed with our immediate situation. "Monday morning found Tom Sawyer miserable. Monday morning always found him so—because it began another week's slow suffering in school."

My son, his eyes still clogged with sleep, sat hunched on his backpack on the ledge by the driveway, fiddling with a castor bean pod, the dog gnawing the toe of his running shoes, and listened to Tom's encounter with Huck Finn on the way to school. "Say—what is dead cats good for, Huck?" "Good for? Cure warts with."

This is the kind of conversation that, in spite of contemporary distractions posed by Medal of Honor, YouTube, Borat, and André 3000, still sings to the youthful soul. I saw a glint in Charles's eye. "Mark the page," he commanded, as the bus pulled up and he slouched out of the gate. And the next morning he asked me to start all over again, at the beginning.

From the September 2007 issue of O, The Oprah Magazine