OWN and Oprah.com Launches Oprah's Thank You Game on Facebook

Oprah's Thank You Game launches with the season finale of Oprah's Lifeclass: the Tour 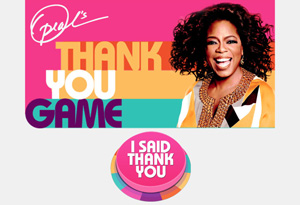 Los Angeles, CA – OWN: Oprah Winfrey Network and Oprah.com announced today the launch of Oprah's Thank You Game on Facebook facebook.com/owntv to spread gratitude around the world in an effort to thank half a billion people worldwide. The game launches in conjunction with the season finale of Oprah's Lifeclass: the Tour airing tonight (Monday, April 30 at 8 p.m. ET/PT) where Oprah discusses mastering the art of gratitude.

OWN has partnered with world-renowned alternate reality game designer Jane McGonigal, PhD, developer of SuperBetter, who created and designed an interactive way to encourage and display gratitude. McGonigal's research on the science of social networks and the contagious nature of gratitude shows that one properly executed "thank you" can reach up to 258 people. Players will be educated on how to find the benefit, acknowledge the effort and spot the strength when making a thank you, then encouraged to share their success on OWN and Oprah's Facebook pages by clicking the "I Said Thank You" button to visually see how many people around the world are participating in expressing gratitude through heat map technology.

"This game is a great way to harness the power of social media to spread the message of gratitude to people all over the world," said Sheri Salata, president, OWN. "If we can focus on sharing our gratitude with our friends, family and online communities, imagine the shift in consciousness that is possible."

Oprah's Thank You Game shows how just by playing a game, you can do real-world good. We're creating the biggest gratitude network in history. Our collective goal is to spread gratitude to half a billion people worldwide," said Jane McGonigal, chief creative officer, SuperBetter Labs.

A daily challenge will post via OWN's Twitter and will be available on the Oprah's Thank You Game Facebook app including, "Thank" someone who gave you an opportunity, someone who is having a hard day, someone who wouldn't expect it, or someone you've known a really long time. Players can share in the conversation on Twitter using @OWNTV or #ThankYouGame. Other elements include "What's New" blog posts and "Gratitude Secrets" where users can discover the 12 secrets of gratitude. Players also have the option to enter their email address for the chance to receive a personal thank you from Oprah Winfrey.

The online game launches in conjunction with the Oprah's Lifeclass: the Tour finale tonight (Monday, April 30 from 8-10 p.m. ET/PT), which discusses mastering the art of gratitude. Winfrey is joined on stage by guest teachers Iyanla Vanzant, Tony Robbins, Bishop T.D. Jakes and Deepak Chopra from the Metro Toronto Convention Centre in Toronto, Ontario, Canada. Winfrey and the experts will work with guests who struggle to feel grateful, including a widow who lost the love of her life and can't move past her sorrow and six women living in a correctional facility who explain how they found gratitude in spite of their difficult circumstances. Through their stories, Lifeclass students will learn how to find gratitude in a new, inspiring way. To date, the second season has seen over 1.6 million online views, with viewers from over 170 countries tuning in as live guests via Skype joined the conversation from all over the world. Numerous Twitter topics including #Lifeclass and organic topics such as #StandingWithSteve have trended nationally and worldwide during each show, resulting in nearly 245,000 tweets.

About OWN: Oprah Winfrey Network
A joint venture between Harpo, Inc. and Discovery Communications, OWN: Oprah Winfrey Network is a multi-platform media company designed to entertain, inform and inspire people to live their best lives. OWN debuted on January 1, 2011, in approximately 77 million homes on what was the Discovery Health Channel. The venture also includes the award-winning digital platform, Oprah.com. For more information, please visit www.oprah.com/own and www.press.discovery.com/us/own.
Published 04/30/2012

More Oprah.com
Live Pray The Gay Away Discussion with Lisa Ling and Gayle King
The Oprah Winfrey Show: Reflections on an American Legacy
OWN Acquires New Episodes of Tyler Perry's For Better or Worse
OWN to Air a Special Episode of Our America with Lisa Ling
OWN Announces Second Season for Our America with Lisa Ling
OWN Announces New Series: "Beverly's Full House"
Harpo Studios to be the Home of Rosie O'Donnell's New Talk Show for OWN
Oprah's New Original Primetime Series Oprah's Next Chapter