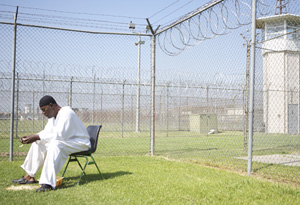 Sons of Perdition takes viewers inside the lives of three teenage boys after they escape from the Fundamentalist Latter Day Saints compound on the Utah/Arizona border, the oldest polygamist community in the United States. After leaving Colorado City, the boys join an underground network of other FLDS exiles, condemned by their community and struggling to exist in the alien landscape of mainstream America—without parents, money or education. Offering private sermons, hidden photographs and insider testimony, Sons of Perdition follows the courageous journey of these remarkable teens searching for meaning in a strange new world. The documentary has played to enthusiastic audiences at over 30 film festivals. Filmmaker Magazine called it "an emotional rollercoaster" and the Huffington Post said it's "a penetrating, insightful and riveting documentary." Impact Partners and BBC Storyville present A Left Turn Films production in association with Motto Pictures and Cactus Three. The film is directed by Tyler Measom and Jennilyn Merten and produced by Julie Goldman, Tyler Measom and Jennilyn Merten.

Serving Life is the first OWN original documentary airing on the network. Narrated and executive produced by Academy Award® winner Forest Whitaker, the film takes viewers inside Louisiana's maximum security prison at Angola, where the average sentence is more than 90 years. The prisoners within its walls are the worst of the worst—rapists, kidnappers and murderers. With prison sentences so long, 85 percent will never again live in the outside world. Instead, they will grow old and die in Angola. Serving Life documents an extraordinary hospice program where hardened criminals care for their dying fellow inmates. In doing so, they embark on a journey that may end in personal rehabilitation. "Serving Life reveals the humanity that exists inside each and every one of us," said Whitaker. "In the Angola prison's hospice, we meet inmates who decide to take an opportunity for redemption, reminding us of the connection that exists between each and every human being." The volunteers are trained, pushed and tested. Some fail, but some succeed and discover that the human touch can reach the soul. "I thought maybe if I helped somebody else," one inmate says, "that would help relieve some of the guilt." The film is produced by Lightworks Pictures in association with KPI for OWN: Oprah Winfrey Network. Executive producers include Nick Stuart and Molly Fowler. The film is produced and directed by Lisa R. Cohen.

Life 2.0 follows a group of people whose lives are dramatically transformed by the virtual world Second Life. They enter a new reality, whose inhabitants assume alternate personas in the form of avatars—digital alter egos that can be sculpted and manipulated to the heart's desire. The film is foremost an intimate, character-based drama about people who look to a virtual world in search of something they are missing in their real lives. A young woman in Detroit becomes a star designer of virtual clothes and houses; an American and a Canadian fall in love online then struggle to build a real life together; a man creates the avatar of an 11-year-old girl who he believes is an expression of his subconscious. The results are unexpected and often disturbing: reshaping relationships, identities, and ultimately the very notion of reality. Mixing high drama and quirky humor, the film uniquely explores the promise, perils, and implications of virtual worlds for society at large. The film premiered at the 2010 Sundance Film Festival and was the winner of the 2010 Philadelphia Film Festival for Best Documentary Feature. Life 2.0 is an Andrew Lauren Productions, PalmStar Entertainment and OWN presentation. The documentary is produced, directed and edited by Jason Spingarn-Koff; produced by Andrew Lauren and Stephan Paternot; co-produced by Jonathan Shukat.

About OWN Documentary Club
The OWN Documentary Club aims to engage audiences in the same manner that Oprah's Book Club significantly changed the reading habits of the country, and was created to spotlight cinematic documentaries that inspire and entertain.

About OWN: Oprah Winfrey Network
A joint venture between Harpo, Inc. and Discovery Communications, OWN: Oprah Winfrey Network is a multi-platform media company designed to entertain, inform and inspire people to live their best lives. OWN debuted on January 1, 2011, in approximately 80 million homes on what was the Discovery Health Channel. The venture also includes the award-winning digital platform, Oprah.com. For more information, please visit Oprah.com and www.press.discovery.com/us/own.

More Oprah.com
OWN Announces Second Season for Our America with Lisa Ling
Flipboard Partners with OWN: Oprah Winfrey Network and Oprah.com
OWN Acquires New Episodes of Tyler Perry's For Better or Worse
OWN to Air a Special Episode of Our America with Lisa Ling
Live Pray The Gay Away Discussion with Lisa Ling and Gayle King
Harpo Studios to be the Home of Rosie O'Donnell's New Talk Show for OWN
Oprah's Book Club 2.0 Launches Online June 4 with Wild by Cheryl Strayed
Oprah to Hold Live Online Discussions During Premiere Week of Oprah's Lifeclass