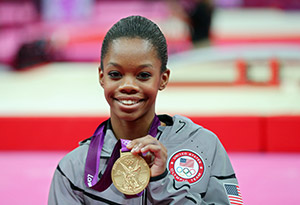 Los Angeles, CA – OWN: On the heels of gymnast Gabby Douglas' victorious Olympic experience in London—winning gold medals in both the individual all-around and team competitions—Oprah Winfrey sits down with the 16-year-old for a candid conversation from her training ground in West Des Moines, Iowa. The interview will air on Oprah’s Next Chapter at a special time on Sunday, August 26, at 8:30 p.m. ET/PT on OWN: Oprah Winfrey Network.

Douglas will discuss her rise to Olympic gold and the intense and immediate media attention she found herself facing in London. Winfrey will visit the host family that provided a second home for Douglas during her training, and visit the gym in Des Moines, Iowa, where Douglas trained six days a week in preparation for London. Winfrey will also speak with Gabby's mother, Natalie, who cheered Gabby on from the stands every day and stood behind her as she pursued her Olympic dreams.

About OWN: Oprah Winfrey Network
A joint venture between Harpo, Inc. and Discovery Communications, OWN: Oprah Winfrey Network is a multi-platform media company designed to entertain, inform and inspire people to live their best lives. OWN debuted on January 1, 2011, in approximately 77 million homes on what was the Discovery Health Channel. The venture also includes the award-winning digital platform, Oprah.com. For more information, please visit www.oprah.com/own and www.press.discovery.com/us/own.
Published 08/10/2012

More Oprah.com
Oprah Speaks with Usher About Bitter Custody Battle on Oprah's Next Chapter
OWN Announces Fall Programming Lineup and New Series for 2013
Oprah's Exclusive Interview with Lance Armstrong Expands to Two Nights
Oprah's New Original Primetime Series Oprah's Next Chapter
The Oprah Winfrey Show: Reflections on an American Legacy
OWN Acquires New Episodes of Tyler Perry's For Better or Worse
OWN to Air a Special Episode of Our America with Lisa Ling
Live Pray The Gay Away Discussion with Lisa Ling and Gayle King