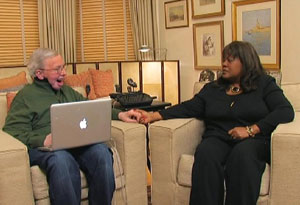 PAGE 6
Modern technology has also given Roger a life-changing gift—his voice. A company in Scotland is using cutting-edge technology to take hours of Roger's past movie commentaries and create a new, computerized voice from those clips.

Though it won't be perfect, Roger says he's looking forward to sounding like his old self again. "It's what they call a beta. It still needs improvement, but at least it sounds like me," he says. "When I type anything, this voice will speak whatever I type. When I read something, it will read in my voice. I have got to say, in first grade they said I talked too much. And now I still can."

Watch Roger and Chaz test the voice for the first time.

Chaz hasn't heard her husband's voice since July 1, 2006. She's moved to tears. "It's incredible that that's your voice," she says. "Roger? What do you think?"