The Cast of Modern Family 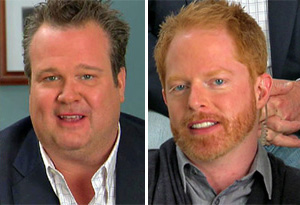 PAGE 2
One thing that may surprise Modern Family fans is that Eric Stonestreet, who plays Mitchell's emotional and over-to-top partner on the show, is actually straight in real life. "I say I'm 'openly straight,'" he says. "I never thought this would be the character that people would know me for, but it's just an honor to play him."

Audiences everywhere are embracing Eric's lovable character, and the critics have also taken note: Eric walked away with the award for Outstanding Supporting Actor in a comedy series at this year's Emmys. Even though he was up against co-stars Ty Burrell and onscreen partner Jesse Tyler Ferguson, no one was happier for him than his castmates were. The cameras even caught an emotional Jesse tearing up as Eric gave his acceptance speech.

"It was the first award out of the gate, and I think our emotions were high and I just couldn't help it. I broke down," Jesse says. "I was so happy for Eric."