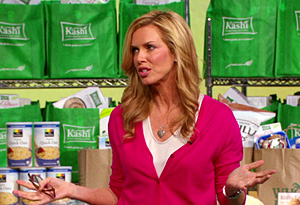 Oprah and some members of her staff recently took on a radical challenge: to go vegan for one week. That meant no meat, no fish, no milk, no eggs—nothing that comes from an animal—for seven full days. The charge was led by New York Times best-selling author Kathy Freston, who has sworn by a vegan lifestyle for seven years now.

"Everyone [at Harpo] was so excited and interested in it. I think knowing that it can be such a game-changer—that it can really affect you in your body and your spirit—I think so many people were just excited to give it a whirl," Kathy says.

While many staffers were reluctant to change their food habits, 378 signed up for the one-week challenge. "I usually eat a sausage muffin every day and a huge coffee with five creams and a little ice," says Rich, a video editor. "So today I decided not to do that. I thought, 'Okay, I'm going to start the day right. We're going to try this whole vegan thing.'"