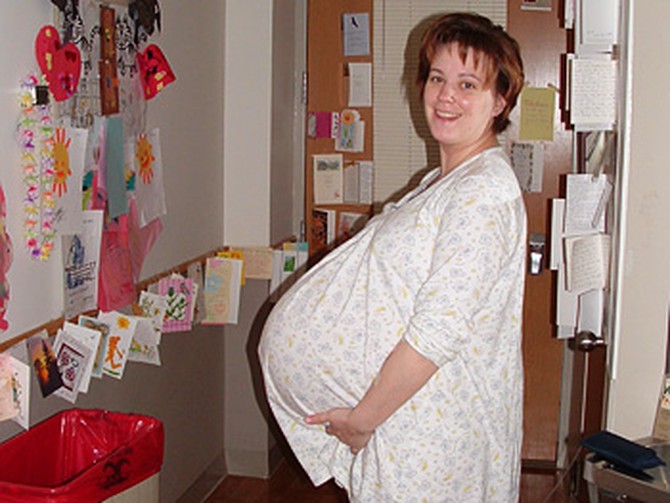 Every week, millions tune in to watch one Pennsylvania family get dressed, do laundry and get dinner on the table. Normally, everyday chores don't make great television…but this is no ordinary household.

Jon and Kate Gosselin are the parents of twins and sextuplets! "Jon and I both knew we always wanted to have kids," Kate says. "We weren't able to get pregnant on our own, so we turned to fertility treatments."

In 2000, Kate gave birth to twin girls, Cara and Mady. Then, the couple decided to try for one more child. "We got a little more than we bargained for—we got six more," Kate says. "We're considered a fertility nightmare." 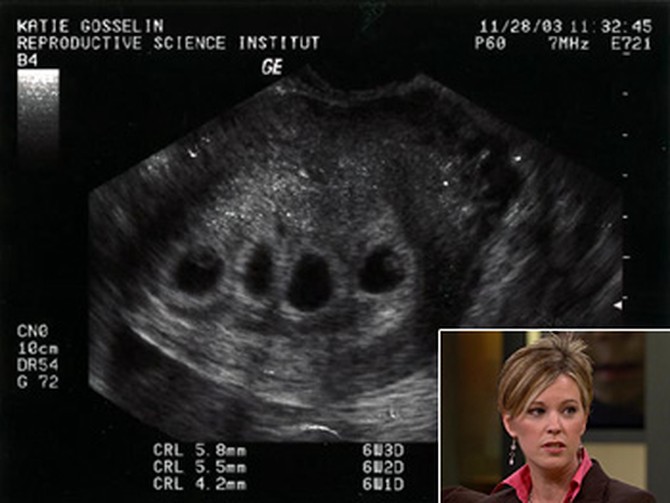 Jon and Kate say their lives were turned upside down the day they found out they were expecting sextuplets.

When Kate went in for an ultrasound five weeks into her pregnancy, she says she thought she might be carrying more than one baby…but she never imagined there would be six. "As soon as they flashed the ultrasound screen, I saw too many circles to count," she says. "I was thinking, 'These cannot be babies. There's too many.' I instantly went into shock."

As the doctors whispered, Jon says he crouched on the floor to keep from fainting. "He was close to tears, which he's usually very silent and strong," Kate says. "I thought, 'Now we're really in trouble.' … It sounds funny now, but at the time, our whole lives just flashed before our eyes."

At just 26 years old, Jon says he immediately thought of the family's finances, as well as Cara and Mady. "I [was] thinking of my twin daughters and, 'How am I going to afford this?'" he says. "As a father, I think you want to take care of your family and do the best you can."

They knew raising eight children would be draining—emotionally and financially—but Jon and Kate say they never considered reducing the number of fetuses in the womb. "When we went in for that [fertility] appointment, I said to them every time, 'Really be careful with us, because we're not doing that ever. It's not for us,'" she says. "Actually, right before that ultrasound, the last thing I said to [the doctor] was, 'Whatever you're giving me, we're taking.'"

On May 10, 2004, the family of four welcomed Hannah, Joel, Leah, Collin, Alexis and Aaden into their lives. 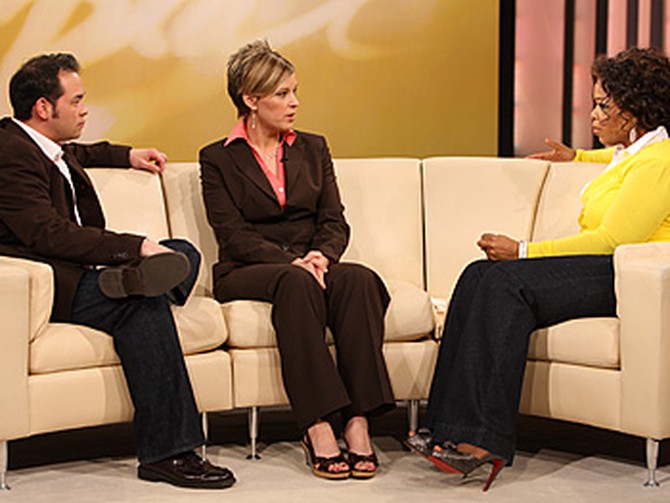 Two sets of multiples make life a little more complicated for the Gosselins. While Jon's at work, Kate relies on to-do lists, shopping lists and schedules to run the household.

Kate spends most of her time cooking healthy, organic meals for her family of 10. "My day is make a meal, serve a meal, clean up a meal, clean up everything, wipe this one, change that one, deal with this one," she says. On average, Kate says she runs the dishwasher two or three times a day and uses about 1,200 paper plates every month.

Mealtime usually leaves Kate with eight messy kids and loads of dirty laundry. "I do at least two loads a day, with the most being five a day," she says. "By 4 p.m., I would say, 'It's two more hours until Jon comes home, and I'm ragged.'"

How do they keep it together? Kate says they take it one day at a time. "I wake up in the morning, and before my feet hit the floor, I pray for strength for that day because I don't do anything beyond that day," she says.

The stress of raising eight children under the age of 8 doesn't always bring out the best in these parents, but they know they're in it together. "It might be a crazy life," Jon says. 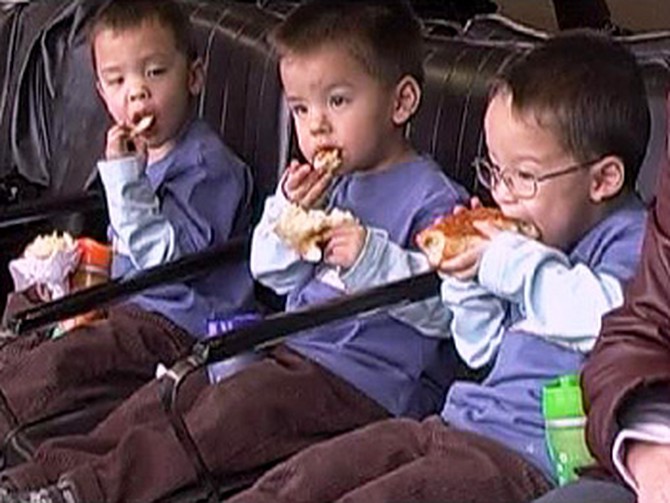 If you get a headache just thinking about family trips, imagine traveling with six 3-year-olds and two 7-year-olds.

It took two days, six suitcases and three carry-ons to get the Gosselins from Pennsylvania to Chicago. When they travel, Kate says she fills luggage with treats, blankets, Crayons and toys to keep the kids busy during the flight. "Take tons of food," she says. "That's my secret for everything. When they're cranky, just feed them."

With babysitting reinforcements at the ready, the gang hops aboard a private bus to the airport, where they're met by an airline agent. Fans of their reality show also stop by to say hello.

Despite a few minor meltdowns, the family makes it through the two-hour flight with minimal turbulence. 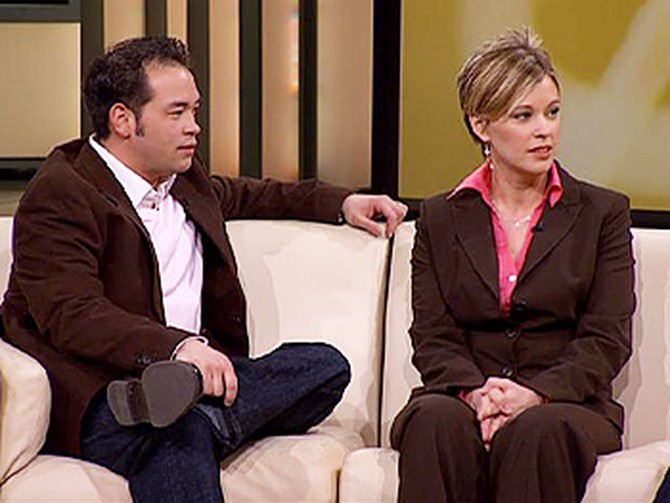 Camera crews add to the chaos and overcrowding in the Gosselin house, but Kate says they wanted to be part of a reality series to show the world what their lives are really like.

Originally, Kate and Jon only agreed to shoot a one-hour special for the Discovery Health Channel. At the time, Jon had just lost his job, and Kate says they were feeling very misunderstood in their community. "People were saying, 'Oh, goodness, they're unemployed, and they have eight kids.' There was a lot of yuck," she says. "We were given six more children, but that didn't mean we didn't love them and want them. … We had to stretch our hearts, essentially, and people didn't understand that."

By letting people see how they lived day-to-day, Kate says she hoped to clear up any confusion. After the first special aired, they were asked to do another hour-long show. Then, TLC approached them to be a part of a series. They agreed. "By this time, we had been doing this for a year [with the] same crew, and our kids loved them," Kate says.

This series is also helping Jon and Kate document the special moments in their kids' lives. "It was, for us, memories that we didn't have time to videotape in our hands," Kate says. 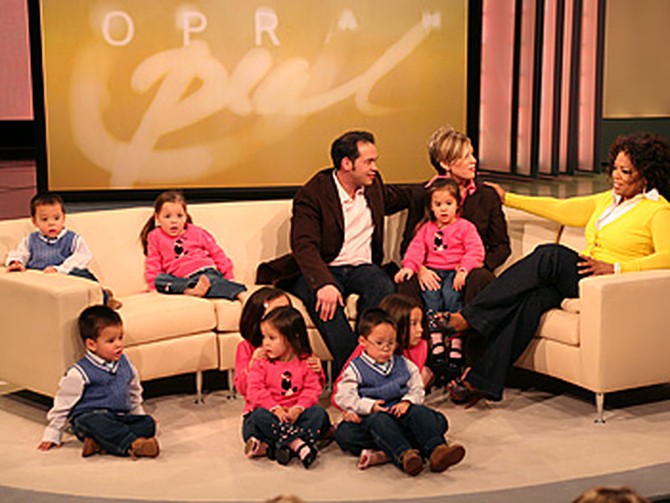 To get a sense of what they contend with every day, Oprah invites Jon and Kate's eight onto the stage.

Cara and Mady, the 7-year-old twins, help corral their younger siblings onto the sofa. "I think it's really fun being the oldest," Cara says. "I'm really glad I'm the oldest, not the youngest."

When the sextuplets first joined the family, Kate says she worried about her twin daughters. "They wanted a little brother or sister, not six of them," she says. "There is still jealousy from them that crops up here and there. … It's still a process to get them to accept that we are a team. We're a family."

At home, Jon and Kate say timeouts are as normal as blinking. Now that the sextuplets are old enough to walk and talk, Kate says they fight over territory and toys. "When they get ugly, I put them in timeout or try to help them resolve the fight," she says.

They may be out of the "terrible 2" phase, but Kate says the sextuplets' behavior has not improved. In fact, it's gotten worse. "Actually, 3s are rougher for us than 2s," she says. "Didn't you know? Three is the new 2."

After a bad day, Kate and Jon say they try to go to sleep knowing tomorrow is a fresh start. "We just really want our kids to grow up productive members of society," Kate says. "[And] be the best whoever they are that they can be."