Catching Up with Ted and Gayle Haggard 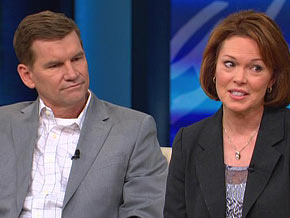 When Oprah interviewed former evangelical leader Ted Haggard in January 2009, e-mails from viewers poured in. Ted was a preacher and father of five who made headlines when a former male escort alleged that Ted paid him for sex and crystal meth. Ted admitted to sexual immorality and buying drugs, and was prohibited from preaching and exiled from his church and the state of Colorado.

When Ted and his wife, Gayle, appeared on The Oprah Show , Ted told Oprah that he was a "heterosexual with homosexual attachments."

Some Oprah Show viewers said they thought Ted was lying; others said he was in denial. One viewer wrote: "I think Ted was open, honest and delightful. This is one of the problems I see with the Christian faith. They insist on being perfect. Perfection is not possible, and the problem is not that Mr. Haggard lied, but he lived in an environment that insisted on his lying."

More The Oprah Winfrey Show
Oprah's Most Memorable Guests
Excerpt from Transition: The Story of How I Became a Man
Becoming Chaz Bono
Everything Is Interrupted
Polygamy in America
Producers' Favorite Moments
The Oprah Show Guests We Can't Stop Talking About
15 Most Frequent Celebrity Guests