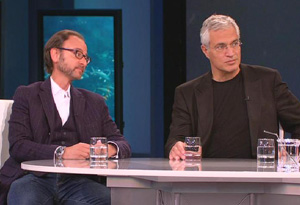 PAGE 5
Despite some reports, a statement from the Japanese embassy says The Cove can be screened freely in Japan, and it may have been shown at the Tokyo International Film Festival.

The mayor of Taiji also shares his reaction to this award-winning film with Oprah Show producers. In the statement, he says: "The movie portrays false claims not based on science as if they are true. We regret that. It's important to mutually respect food culture based upon the understanding of long-standing traditions and circumstances in each region."

Over the past 10 years, however, Louie says all dolphin meat tested in Japan has been deemed toxic by Japanese standards. Ric says this meat contains very high levels of mercury.

"When Ric and I first got to Taiji, they were feeding it to school children because school lunch is compulsory. You're not allowed to bring your own, and you have to eat everything on your plate," Louie says. "We put a stop to that."

SeaWorld vice president Fred Jacobs also weighs in. "SeaWorld opposes the dolphin hunts documented in The Cove. We do not purchase any animals from these hunts," he says in a statement. "More than 80 percent of the marine mammals in our care were born in our parks. We haven't collected a dolphin from the wild in decades."

Published 04/22/2010
Please note that Harpo Productions, Inc., OWN: Oprah Winfrey Network, Discovery Communications LLC and their affiliated companies and entities have no affiliation with and do not endorse those entities or websites referenced above, which are provided solely as a courtesy. Please conduct your own independent investigation (including an investigation as to whether any contributions are tax deductible) before donating to any charity, project or organization. This information is provided for your reference only.