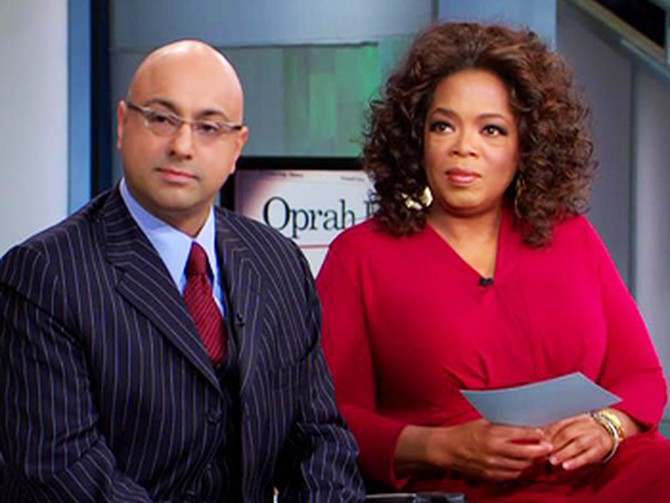 It's no secret that the U.S. economy is in trouble. "We're in the midst of the biggest financial crisis since the Great Depression," Oprah says. But how we got here, what it means for the average American and how we can fix it is pretty confusing. "We all want to know what this $700 billion bailout really means and why it matters to everybody watching this show," she says. "Not just the folks on Wall Street."

CNN senior business correspondent Ali Velshi is giving a lesson in Economic Crisis 101. He's been poked fun at for his gloom and doom financial reports, but the current situation is no laughing matter. "It's serious," he says. "But the fact is we'll get through this if we understand how it affects us and what we can do." 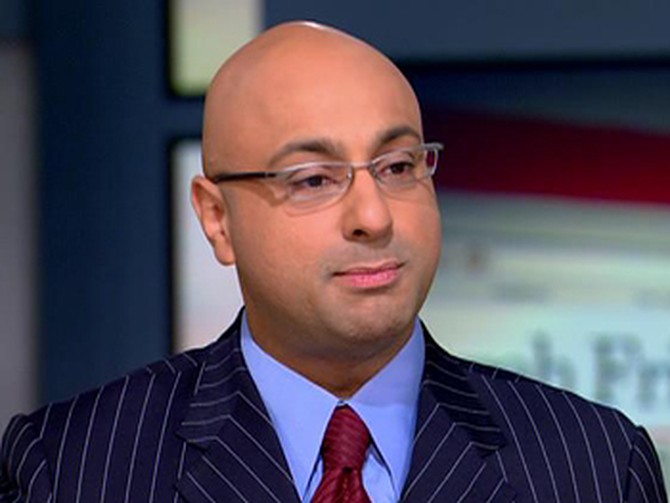 The first step toward grasping the bailout plan is to understand how we got in this mess in the first place. Ali says it started with three basic assumptions about the American economy: homes will increase in value over time, wages will go up over time and investments in the stock market will go up over time. "Very rarely do all three not go up at the same time," he says. "So we thought that things will be better for us financially year after year." The banks encouraged that concept, Ali says, because the more the American people spend, the more money banks make.

Ali says that since Americans thought their finances would increase over the years, they spent as if that money was guaranteed. "We all lived a little beyond our means and then a lot beyond our means," he says. "Now, our country, our people, our banks and our government are all heavily, heavily indebted and the money is running tight." 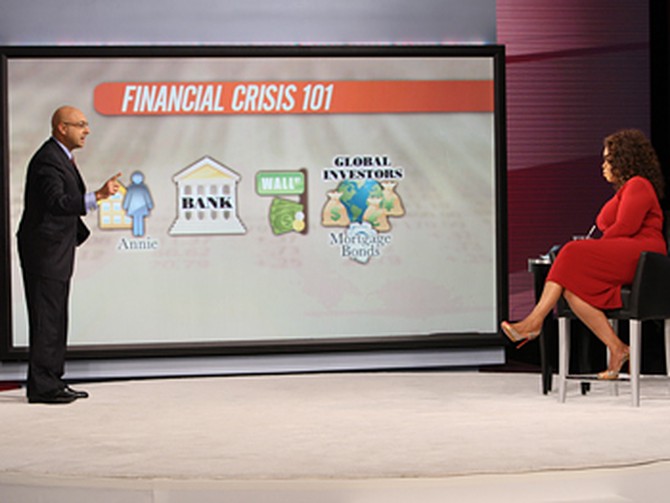 Ali says a mortgage meltdown is primarily responsible for the economic trouble. The cycle started with regular Americans who were unable to afford their mortgage interest rates. As a result, banks foreclosed their homes. Eventually, the effects of the home foreclosures reached a global scale, causing a financial collapse. "We are very powerful people, because we caused this," Ali says. 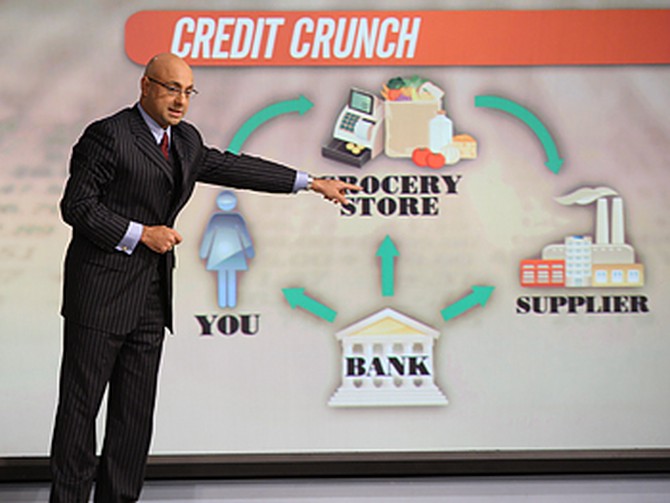 The other key to understanding the financial mess is understanding credit, Ali says. "Let's show you how central credit and banking is to your life," he says. "The bank gives you a credit card, and you use that to spend money at the grocery store. But the bank also gives the grocery store money because the grocery store has to [borrow] to buy things from a supplier, let's say the cereal factory. ...The supplier [or cereal factory] needs to buy wheat or flour, so they borrow money from the bank [too]." But because of the current economic situation, banks don't trust anyone to pay them back, Ali says. "Your credit line, if you did nothing wrong, may have been reduced by the bank just because they are scared that you might get into trouble."

Ali says that, due to credit reduction, the cereal factory can't buy as much wheat, and the grocery store can't buy as much cereal. When stores or suppliers can't afford to buy as much they used to, they can't do as much business. Then, people get laid off.

As a result, all the people who lost their jobs aren't paying taxes or shopping as much, Ali says. "They're a net drain on the financial system. They're not contributing." Ali says that in the first nine months of 2008, 750,000 people in the United States lost their jobs. In September 2008 alone, an incredible 159,000 jobs were lost. "This is what hurts this system," he says. "And that's why it affects you." 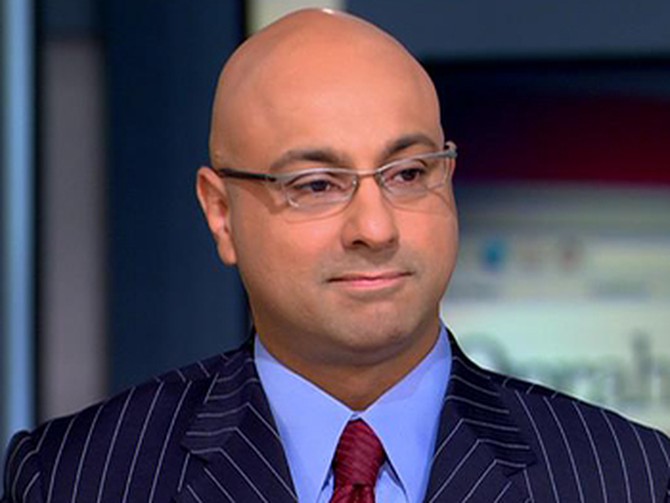 In order to start fixing the financial problems plaguing the country, the U.S. government has proposed a $700 billion bailout plan. "People were phoning their congressmen and congresswomen saying, 'We don't want you bailing out these fat cats,' because the perception was we were helping all these guys on Wall Street and they were going to get richer and richer even though they'd done all of this to us," Oprah says. "But it's really all of us who are going to be affected."

Ali says that if the bailout doesn't get passed, credit will get even tighter and more jobs will be lost. "Inadvertently, we're going to have to help Wall Street to get the money trickling down to you, because that's the system through which money flows," he says. "But there's a real reason to be angry."

Still, the task at hand should be to fix the problem instead of wasting time blaming Wall Street, Ali says. "The bottom line is it's like your 3-year-old has set fire to your curtain, and you're having a conversation about whether 3-year-olds should have matches or whether your kid's a brat," he says. "Put the fire out, and have the conversation with your kid later. That's the situation that we're in right now. The fire is going to consume your house if it does not get put out." 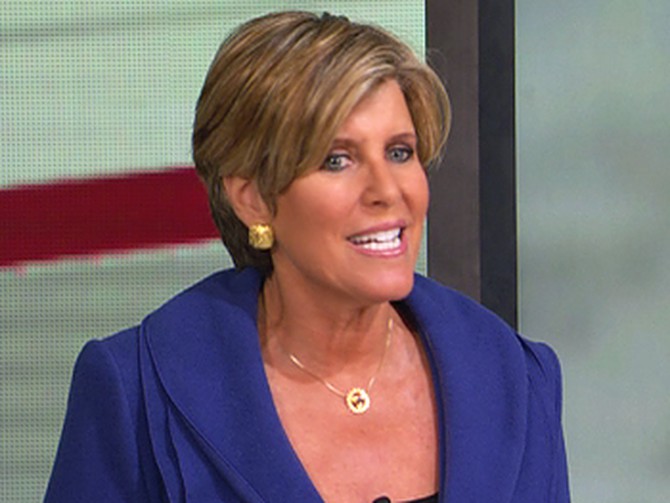 Money expert Suze Orman says we should blame the banks for this financial meltdown. "I refuse to believe that it started with [regular people]," she says. "It was the banks and their greed and their deceit of them wanting to make money and giving loans to people when they should have said, 'I'm so sorry,' like they did years ago. ... But instead they said, 'Here you go, little one, take a mortgage.'"

To survive this financial crisis, Suze says we need to stay calm—do not panic by withdrawing your life savings or selling your 401(k) plan. "Don't make mistakes, people," she says. "Just stay calm and understand, as Ali said, 'We're going to get through this.' But only if you make the right decisions for you. You cannot control what others are doing out there, but you most certainly can control your own actions." 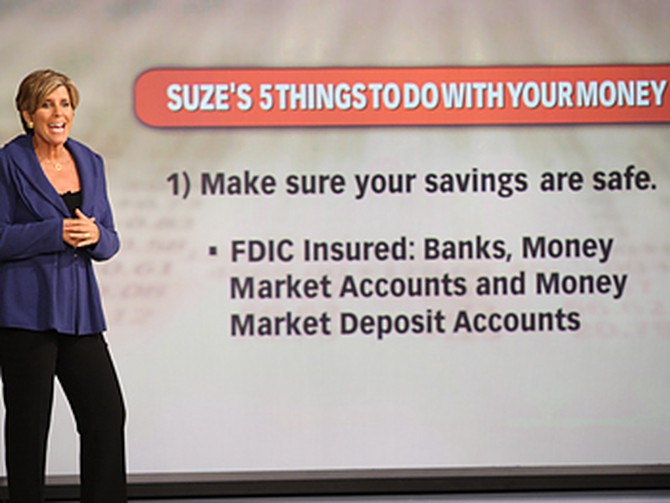 To take action, Suze says there are five things you should do right now to make sure you are protected. First, make sure your savings are safe—and that doesn't mean under your mattress. She says to keep your money in banks, money market accounts and money market deposit accounts that are FDIC insured.

Even if your bank goes under, Suze says your money is safe if it is in an FDIC-insured bank. "It will take you two days and you'll have your money back," she says. To find out if your bank or account is FDIC insured, go to MyFDICInsurance.gov.

Government-backed treasury bills, bonds or notes and treasury money market accounts are also safe options. "They are safe as safe can be," Suze says. 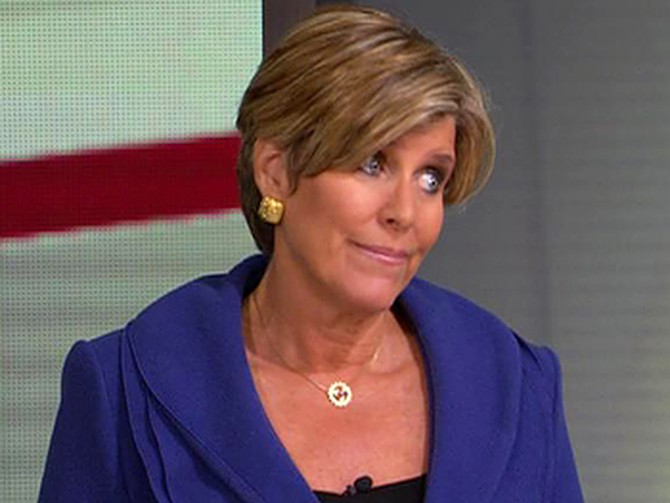 Along with paying down your debt, Suze stresses the importance of paying your bills on time. "If you are late on a credit card payment, that hurts your credit score," she says. "If it hurts your credit score, which is known as your FICO score, everybody who [you have] credit with will know it. Your interest rates will go up, and they will most certainly slam you right out of your credit." 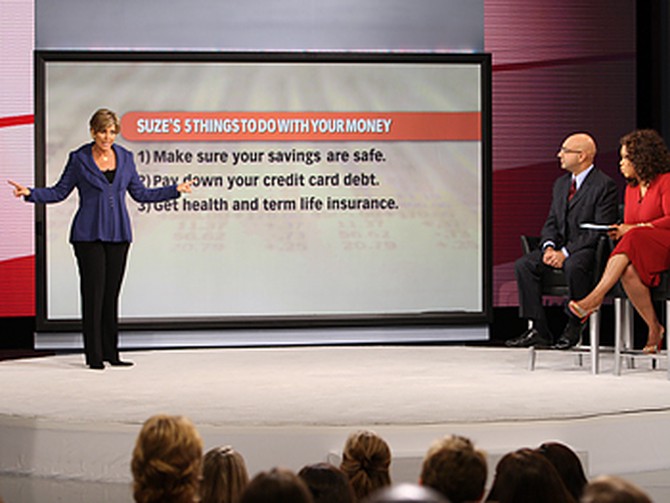 Suze's third step is to get health and term life insurance. If you already have health insurance—great! But Suze says to make sure you don't cancel your policy to save a few bucks. "Do you understand that the number one reason for bankruptcy in the United States today is bankruptcy over medical bills? Don't ruin your life forever because you think you can go without health insurance," she says.

For your life insurance policy, Suze says term life insurance—which is good for a specific period of time—is the way to go. "You are to stay away from whole life, universal and variable life insurance, do you hear me?" she says. 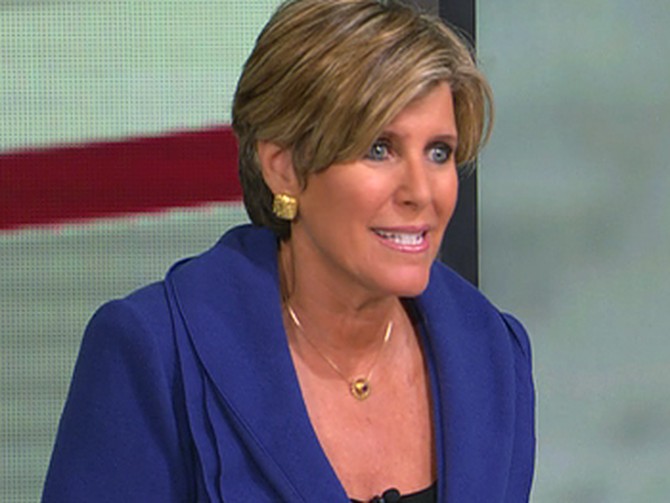 Fourth, Suze says to continue making contributions to your retirement plan. "This is not the time to stop investing in your retirement plans," she says. "Because, as the markets go down, your monthly contributions buy more shares. The more shares you have, the more money you make in the long run. And when all of this is over and the market starts to go back up, guess what? You are going to be so happy you didn't stop now." 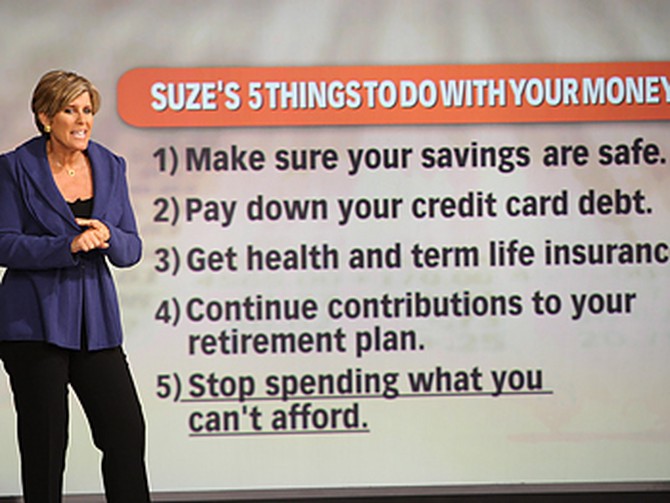 Suze says her last point is probably the most important on her list—stop spending more than you can afford. "The goal here is very simple. Wouldn't you rather live a life where you feel free, easy, you don't have to worry? Where you value who you are more than what you have? Where you value the quality of your life?" she says. 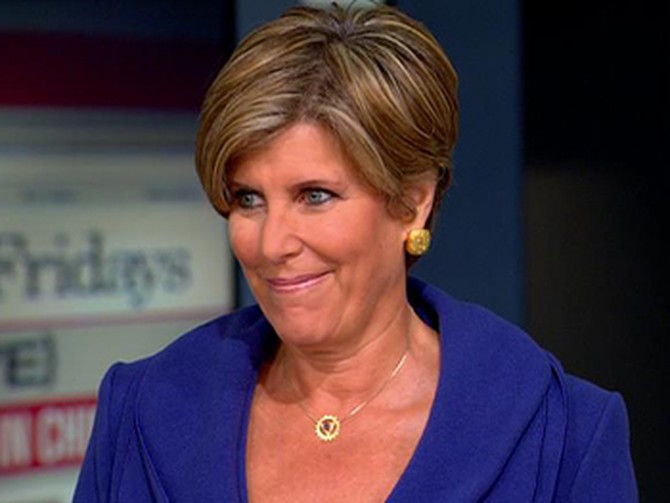 Ali says it's going to be a difficult road to get people to stop spending beyond their means. "It is everywhere we look—there's still cheap credit, there's still governments telling us [to] spend our money," he says. "It's going to take a long time to change the entire way of thinking so we can stop spending what we can't afford."