Where Does It Hurt? 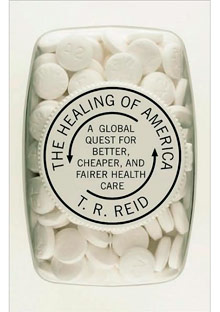 The Healing of America
By T.R. Reid
288 pages; Penguin

The Healing of America cuts, with the skill of a brilliant surgeon, through the myths and misunderstandings surrounding the American healthcare crisis. Using his injured shoulder as an occasion to ask doctors what treatments they prescribe and at what cost, journalist T.R. Reid visits France, Germany, Japan, Canada, the UK, and India. He discovers many systems, adapted for each country—and not the standardized, bureaucratic monolith painted by opponents of universal insurance. In Canada patients endure long waits to consult specialists, but in Japan you can see a star orthopedist within days. What most programs share are digitized medical records, low malpractice premiums, more modest earnings for doctors (who graduate with little or no tuition debt), and an insurance system not based on turning huge profits for corporate insurers. Reid shows how measures often criticized for being inefficient and expensive would streamline wasteful practices and save America a fortune. He argues that healthcare is not just a political and economic issue but a moral one: As the richest country in the world, we cannot go on performing so abysmally in studies that measure infant mortality and life expectancy. Every year 18,000 American deaths could be prevented by adequate medical coverage. This is a book that everyone should read before taking sides in the debate about an issue that, for many of us, is nothing less than a matter of life and death.

See all of this month's reviews

From the September 2009 issue of O, The Oprah Magazine