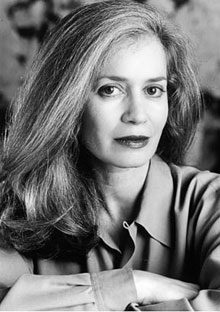 Photo: Kenneth Chen
A few days after the attack, the wife of the stranger who attacked me called me on the phone. She wanted to know if I was serious about her husband. She said he told her he was having an affair with me. She said she got my number from Student Services.

"Your husband broke into my apartment," I said, in the uninflected voice that had taken me this far. "He threatened me with a knife."

"Because he used it on me once," she said conversationally. "I have a scar on my forehead like a quarter moon.

I told her! I played down my looks, but not so far that she would think that was what I was doing.

"You could be describing me," she said, sounding pleased.

She said, "I guess why I'm calling you is to see if I should stay and try to make it work."

I told her I could not possibly advise her, and gave her instead the number of a women's shelter in case he gave her more trouble. I reminded her what her husband had done to me.

She said, "Would you like to have lunch sometime anyway? My treat."

I told her I was moving out the next week. Saying so, I meant it.

I hung up and looked for my dog's new leash.

The phone call I got before the attacker's wife was from a friend who had stumbled on an exposed tree root the day before, had fallen and broken her ankle.

This was in the woods near her house, she said. She told me she had unleashed her retriever and sent him to get help. The dog had returned with a neighbor who called for an ambulance on his cell phone.

I told her that my dog would have done the same thing for me, only stopping first to knock over trash cans and try to get laid.

I was dismayed by my impulse to make fun of rescue. But there is something too convenient about rescue. Yet would I not have been spared if the man who attacked me had been made to drop the knife because my dog had been with me and had pinned him to the ground?

I found the new leash, and set out to walk my dog. In the correct grip, the right thumb goes through the loop in the leather before the right hand doubles over to clutch the extra length. This ensures maximum control and should obviate the need to use the left hand. The correct grip causes the dye in the leather to rub off in the creases of the hand. It strengthens the hand when you form a fist for when the proverbial pendulum swings the fuck back.

The Collected Stories of Amy Hempel was named one of the Ten Best Books of 2006 by The New York Times. She directs the graduate fiction program at Brooklyn College.
From the August 2008 issue of O, The Oprah Magazine

More O Magazine
Reading Questions for Oogy: The Dog Only a Family Could Love
What's on Amy Poehler's Bookshelf?
What I Did (and Didn't Do) for Love
Comfort Food: What to Eat When the Going Gets Tough
These Dogs Getting Massages Are the Cutest Thing Ever
Meet the Eighth Wonder of the Baking World
How Do I Find Winter Boots That Fit?
How to Dress for the Weekend