Try Doing This the Next Time You Feel Bored

Boredom sure is boring. So it's a good thing Martha Beck has a plan to help you tackle tedium once and for all.
By Martha Beck 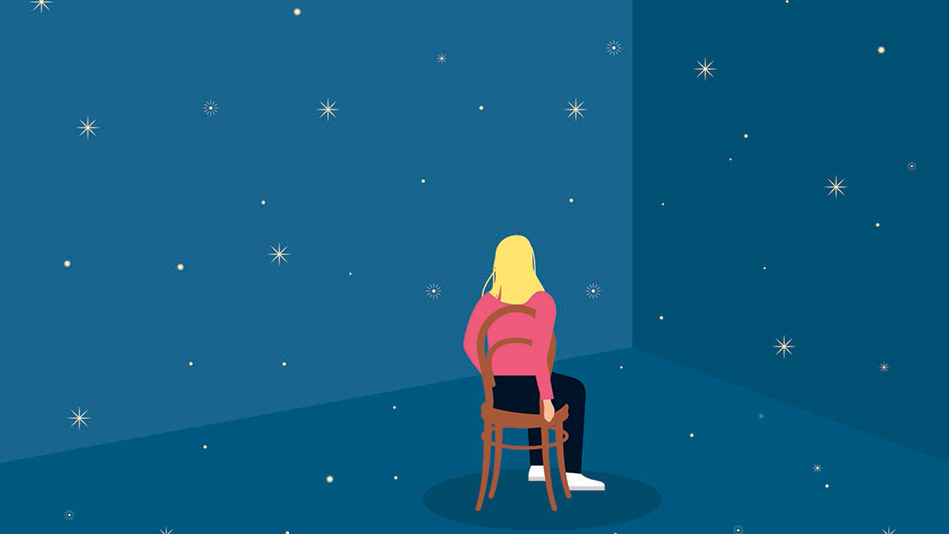 Illustration: Ben Wiseman
You're sitting at the DMV, your hard plastic chair gleaming in the harsh fluorescent light, waiting for your driver's license exam. You're staring at piles of receipts scattered across the kitchen table, wishing a meteorite would set fire to them—or you—so you won't have to file the damn things. You're listening to Granddad reminisce, yet again, about his year in the Marines, during which the only combat he experienced was an encounter with a testy gopher on the parade ground. You're a city person, but you spend your days shuttling children around a suburban environment about as alluring as mildew. In short, you're bored. What can you do? If you've ever cared for an infant, you know that even babies hate boredom. They experience it as a signal that they could be learning, sleeping, playing or watching something more interesting; that every moment of boredom is, in a sense, costing them their right lives. That's why wise caregivers always have an activity kit. Usually it's a large, Mary Poppins–esque bag that may include small toys, colorful plastic keys to chew and appealing music to delight the ear.

Of course, none of these items is particularly interesting to the adult caregiver (unless the kit contains psychedelic mushrooms, in which case it can all become absolutely fascinating). No, most adults force themselves to grimly tolerate boring events, then desperately cram in a little recreation before once again hitting the salt mines. Not me. I have a large, well-tended kit of boredom-relieving activities. Try a few, and I suspect your life will become a bit more fulfilling.

1. Really Relax
Most of us think we get bored when there's nothing going on, but research shows this isn't true. Boredom is actually the feeling of being trapped doing one thing while wanting to do something else. If we have no sense of being stuck, we simply leave dull situations.

In one study, subjects were asked to listen to an article being read aloud. Some were purposely distracted by a television in the next room. Those who heard the TV playing softly reported more boredom than people who heard nothing or people who heard the TV playing loudly. This suggests that we're at maximum boredom levels when we're trying to stick with something while other things tickle the edge of our awareness. So the solution to boredom might not be doing more, but doing less.

Think of sitting on a sunlit, sandy beach with no one around but a supple person to bring you umbrella-clad beverages. Or lying on a massage table, listening to flute music, waiting to be rubbed with smooth, warm rocks.

There, you just used your first boredom-busting activity—or in this case, lack of activity. Deep relaxation is often the best way to handle boredom, and if you can simply imagine yourself in a relaxing situation, your body and brain will react to the imagined environment. Without lifting a finger, you can move from boredom to bliss.

As ridiculous as it sounds, simply stopping is one of the most powerful boredom busters you can master. Think of a boring thing you "have to" do, and ask yourself if it's really essential. Would the world end if you didn't hear Granddad's military memories one more time? Do you absolutely have to file all your receipts yourself, or could you hire a temp for a day to get it done for you? Are you willing to trade your big, bland suburban house for a small apartment in your beloved city? As you ask what you can simply stop, be honest and creative. Remember, each moment you spend being bored literally costs you the life you want.

3. Take Boredom Breaks
If you really, truly have to do something boring, please avoid trying to accomplish it all at once, if at all possible. Doing so creates intense resistance—you may never even begin the task, and if you do, your boredom levels will eventually make you a danger to society.

Before you start something dull, ask yourself how long you can focus on it without wanting to die. I can write for hours without a break, but if I were paying bills, my limit would be five minutes. Housework? Maybe half an hour. Neighborly conversation? Depends on the neighbor. Your times will vary with the task and also with your current energy level.

Whatever your limit, set an alarm to remind you when it's break time. During the break, do, watch or think about something you deeply love. Your break can last five minutes, a day, a week. I know one scholar who lives very simply, so that she can give herself six months off between research projects. Time to play and relax is worth far more to her than the money she'd get by forcing herself to work without breaks.

4. Tap Technology
Every night after dinner, my son, Adam, and I snuggle up to watch reruns of his favorite sitcom. We've seen every episode approximately 40,000 times, but Adam enjoys them anyway. I do, too, because I have a very clever phone. Adam doesn't mind if I surreptitiously check the weather report, read news and blogs, play games. By using technology as a basis for parallel play, we both get to bond without boredom.

5. Seek Stories
Back when there was no YouTube and people communicated with loved ones by throwing rocks at them, I always carried an actual book. Sometimes I still do. As author Stephen King writes, "Waiting rooms were made for books—of course! But so are theater lobbies before the show, long and boring checkout lines, and everyone's favorite, the john." Reading during such times not only occupies the moment, but gives you something to recall and chew on during things like dull conversations and meetings.

6. Exercise Exaggeration
If you're in a dull situation and have no stories to watch or read, try creating them. Boring situations can make wonderful anecdotes. All you have to do is exaggerate a little—okay, a lot—and imagine telling the story later, face-to-face or on Facebook. For example, you might go with something like: "Who can tell how much time has passed since I arrived at the DMV? A man near the front of the line just died peacefully of old age; he was young and beautiful when he got here. The two people immediately in front of me have fallen in love and will be married by the man behind me, who has used his wait time to become an online minister for a religion he invented himself. We eagerly await the birth of the couple's children, who may one day emerge from this place with full vehicle registration for a car that no longer exists except as a smudge of rust." And so on.

7. Enter Enlightenment
I'm only half kidding. When I worked with heroin addicts, they told me the emotion that drove their behavior was boredom. I soon learned that boredom only insulated them from extreme fear, anger and sadness. If they let the boredom be, without fighting it, they'd go through a surge of intense pain and then into a place of peace.

Later I found that my own psyche works the same way. If I lean into the experience of boredom by meditating, I feel negative emotions that rise, peak and drop away, leaving me unusually peaceful. Try this: When you're bored, just repeat the mantra "I accept" while fully experiencing the boredom. I find this helps me endure air travel without attacking other passengers. Meditation masters say that if you keep doing this, you'll eventually end up enlightened.

So there you have it. Whenever you're ready to remember what you were born knowing—that boredom should be a trigger to either relaxation or action—just reach into your Activity Kit for Grown-Ups, pull out the handiest item and move yourself out of the mild torture that's blighting your life. That's exactly what I plan to do, just as soon as I get out of the DMV.

Martha Beck's latest book is The Martha Beck Collection: Essays for Creating Your Right Life, Volume One (Martha Beck Inc.).
From the March 2015 issue of O, The Oprah Magazine

More Inspiration
What Oprah Knows for Sure about Coping with Change
If This Llama Doesn't Make You Smile...
How Elle King Became Rock's Rising Star
The Secret Reason Why Some People Are Never Happy
3 Words That Will Help You Comfort Anyone
Storm Reid Shares the Best Advice Oprah Gave Her While Filming A Wrinkle in Time
A 5-Minute Exercise That Will Boost Your Mood
The 10-Minute Game That Will Change the Way You Think