Why People Are Flocking to This Farm to Heal

At Gould Farm, everyone has a job to do. The most important: heal.
By Katie Arnold-Ratliff 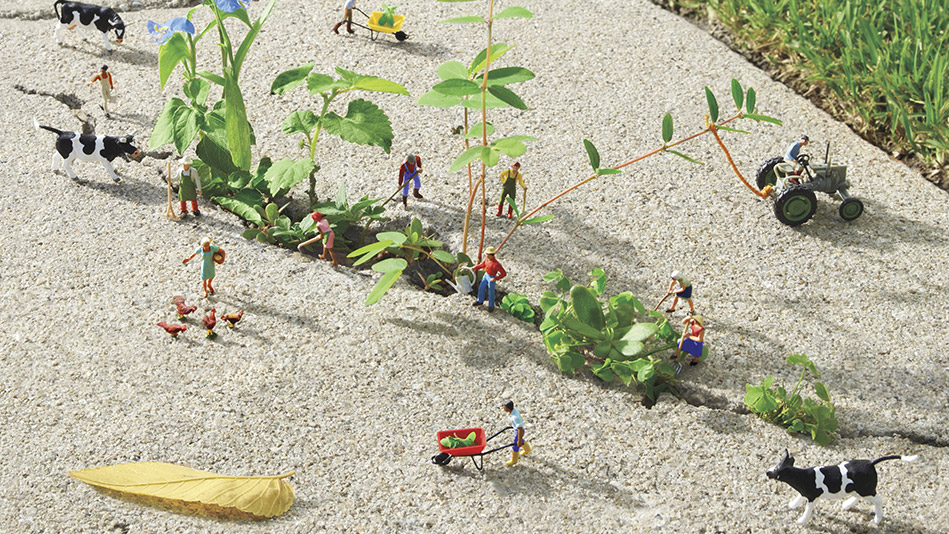 Photo: The Voorhes
Deep in the pastureland of western Massachusetts, off a road cluttered with clapboard houses, sprawls a 700-acre plot known as Gould Farm. Its dairy cows—the ladies, everyone calls them—live at the top of Gould Road, which ambles past the farm's red barn, its row of tractors, its domed greenhouse carpeted with tender lettuce.

The farm is run by a handful of teams. The gardeners till and harvest vegetables, which the cooks sauté and steam for dinner. Dessert comes from the barn, a bakery in disguise, where a squad in white toques measures and mixes. Their milk comes from the aforementioned ladies, tended by another team, who also sees to the cows' progeny (such as Puddin', newly born to Phoebe). The pasture abuts the vast woods encircling the farm, where the grounds crew clears fallen trees and lets goats graze the trails clean.

Everyone has a job. Every task is essential. But nothing is more essential than the work of healing: Every person here has come because, out in the world, mental illness had finally ground his or her life to a halt.

At the turn of the 20th century, people who were mentally ill (or believed to be) were often housed in asylums, where beds were scarce and windows were barred. In her famous 1887 exposé of a New York women's asylum, undercover journalist Nellie Bly saw patients beaten, berated, served rotten food, and left to suffer in the cold. Psychiatric practices of the day included crude electrotherapy, freezing baths and physical restraint.

So it's hard to overstate just how extraordinary it was that in 1913, devout Christians Will and Agnes Gould purchased a tract of farmland to found a restorative community for the mentally ill—a place where daily toil and friendly fellowship would be cornerstones of treatment.

A century later, these principles—minus the religious bent—endure at the farm, supplemented with modern medicine and therapy. The few dozen guests, as residents are called, pay on a sliding scale and stay as long as they need. When a guest arrives—often after a hospital stay, or several—he or she is given a job. Work, the farm's leaders believe, is therapy.

"What's the first thing that disappears when you lose your grip on your life?" asks a former guest. "Your sense of purpose."

Which is just what a job restores.

This morning, Main House—the ancient white three-story structure where Gould Farmers eat, socialize, and report for duty—is alive with voices and the screech of forks on plates. Guests and staffers, who live in houses on the farm, are finishing breakfast. The meal is capped with a hesitant but sincere group rendition of "Amazing Grace." Guests line up for meds, then join their teams.

Nearby, a younger man leans over a hip-high metal table, reading a recipe. After a half hour, vanilla and milk mingle with a mound of sugar in the bowl before him, but adding the eggs is proving difficult. One hit the floor with a sharp crinkle. One went half into the bowl, half down its side. Another broke on the table, albumen slinking across the steel.

Now Nathan walks over with a rag. "Let's tidy up," he says gently. New eggs are retrieved. The man keeps on. The batter materializes.

"You never forget that this place exists to help people," Nathan will later say. "But you also gotta get the muffins out on time, y'know?" The first team a guest joins is the forestry and grounds crew: tall brambles, acres to clear. After this, other jobs are there for the trying. You might plant, cook, or help the mechanic fix tractors. Where you land is a matter of temperament.

"Guests take a crack at things to see what works," says Lisanne Finston, Gould Farm's stalwart, sunny executive director. "We had one guy, a corporate lawyer. He'd never met a pig in his life, but the pig farm became his baby. He researched what makes pigs happy—turns out one thing is puzzles. So he made a pen of buried objects for them to dig up." Finston opens a fridge full of waxy golden discs. Out rolls a wave of funk. "Two guests are learning cheese-making," she says.

Each Wednesday is community meeting; it's warm out today, so the proceedings are moved to a circle of benches near Main House. Finston, outfitted with Tevas and her ubiquitous coffee cup, brushes a hand through her graying hair and updates the group: So-and-so is leaving. So-and-so is arriving. Friday dinner will be pizza at the barn. The next van to town—Great Barrington, population 6,933—will be Saturday. It's dusk, the sky rosy. Snacks of yogurt and granola have been served. While many guests suffer from intractable illnesses—bipolar disorder, schizophrenia, catastrophic depression—the tone is convivial. It's difficult to tell guests from staff.

Difficult, but not impossible. A middle-aged woman, her blonde hair limp, finishes her yogurt and, stone-faced, lets the bowl and spoon clatter to the grass. A moment later, she titters. And titters again. Beneath a tree, a bespectacled 20-something girl plucks blades of grass, never looking up.

One broad-shouldered, unshaven man sits atop a picnic table, mouth ajar. He seems, as some guests do, to be elsewhere—like a link to life has broken, stranding him. But then he speaks, and it's as though he's woken from a trance: "We're showing Braveheart in our dorm. We'll have face paint. Wear kilts!"

The so-and-so leaving tomorrow frowns intensely at his feet. He's gawkily handsome. When someone congratulates him, he laughs in tiny bursts and ducks his head.

The following afternoon, a small group hikes Diane's Trail, named for the late wife of one of Gould Farm's veteran staffers. The goats tear at leaves, skittering into guests' knees.

Among the hikers is a man who's just returned to the farm. Some people leave and never come back. Some need two stays, three. Some depart and meet the saddest, most dreaded fate. Last year, when a man took his own life shortly after leaving, Finston broke the news to the guests who'd known him.

Couldn't hearing this have set back their progress?

"Recovery isn't linear," she says. "You go up; you go back down. We're honest about that."

On the trail, the just-returned man speaks in a slurred stream. Talk of his parents morphs into the tale of a long-ago slight perpetrated by his brother. There is no thread to follow.

"I see," says the staffer. "That must have been tough." The group walks on, footfalls and hoofbeats muffled by the trail's moss.

At dinner on Thursday, the damp heat is persistent. The kitchen serves chicken potpie, peas, a watermelon-feta salad. At the picnic tables, Gould Farmers talk, dig into second helpings. A therapist's child climbs a sapling and hangs from her knees.

The young man about to leave the farm eats with friends, bent over his plate. Opposite him sits the girl who spent Wednesday's meeting plucking grass. Her face is blank. They all eat in silence.

Then the soon-to-be-gone boy turns to the girl. "I'm going to miss you," he says, nodding. "It's been awesome getting to be friends." She smiles in response, her eyes softening, her face radiant.

Tomorrow, that young man will travel down the hill—past the cows, barn, greenhouse, and woods. To leave Gould Farm via Gould Road, you must pass through a hundred-yard stretch of foliage, where the road narrows and the trees form a tunnel of pine. Branches block the sky. It's dark in there, even in daylight. Because the road bends, it's difficult to discern where you're going.

But then you reach the pavement. The world mercifully widens. And the way forward opens once again.
From the October 2016 issue of O, The Oprah Magazine