Life Lessons from Dolly Parton on Beauty, Marriage and Happiness

Her hair may be high, but her philosophy is down-to-earth: The country music legend shares her secrets to feeling beautiful, making love last and staying happy even in hard times.
By Amy Maclin 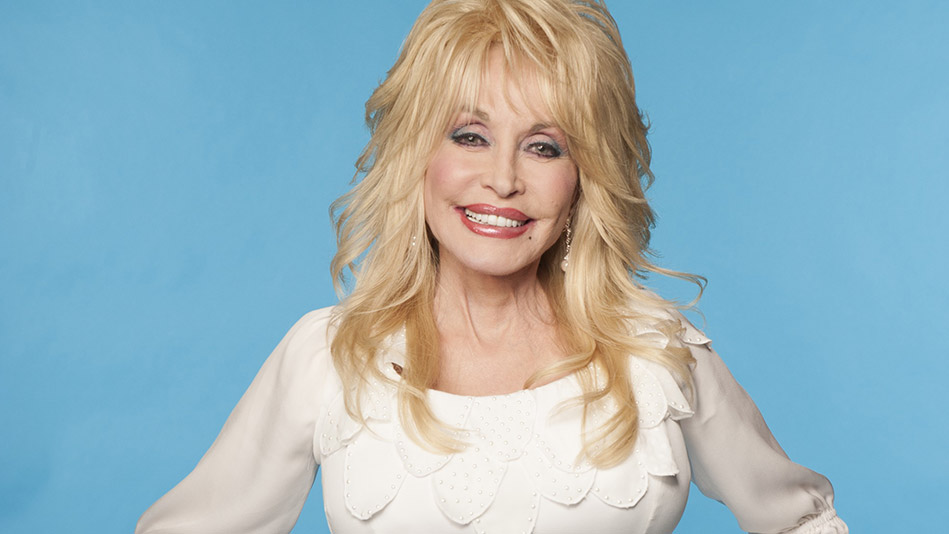 Photo: David McClister
Who but Dolly appeals to so many different types, from spirit-filled Christians to drag queens to "spirit-filled drag queens," as Dolly herself puts it? We're drawn to her flash and sass, her heaven-high wigs. But we also seek her homespun wisdom. A philosopher queen in the guise of a (well-compensated) truck stop hostess, she's known to her friends as the Dolly-Mama.

Dolly has even made her mark on the annals of science: She went to the moon on Apollo 16, singing on a tape that astronaut Charles Duke brought along for the ride. She was the namesake for Dolly, the cloned sheep. And it's been said that physicist Richard Feynman had her in mind when he proposed partons as a name for some of the particles that make up the universe.

It's funny how someone who looms so large can be so teeny in real life, wearing shoes that look hardly bigger than Barbie's. Not that Barbie could handle the Louboutin stilettos Dolly has on today, which add a good five inches to her (maybe) five-foot frame. The wig adds at least another five. Her getup is understated, for Dolly: skintight leather pants and a jeweled sweater zipped modestly over the swells of her celebrated bosom. All porcelain skin and candy-floss hair, she's like a character from a fairy tale.

She smells good, too—powdery and musky and anointed. Her scent is Mary Kay Intrigue. "They discontinued it," she says, "so I got everything they had on eBay." Over the next eight hours, more than 100 reporters will get a whiff: Dolly, who turned 70 in January, is in Nashville promoting a tour in 60-plus cities for her upcoming two-CD set, Pure and Simple with Dolly's Biggest Hits; the May 3 DVD release of her recent NBC movie, Dolly Parton's Coat of Many Colors; and The Complete Trio Collection, from her project with Emmylou Harris and Linda Ronstadt, due out in September.

The fourth of 12 kids born to an Appalachian sharecropper, Dolly likes to tell the story of how she grew up in a cabin without running water; the first time she saw an indoor toilet, she was scared to flush lest she be sucked into the void. The kids used to sleep three or four to a bed, and somebody usually peed. The next day they'd all just wash in the river or a pan of water, using homemade soap.

Dolly was 5 when she composed her first song, "Little Tiny Tasseltop," an ode to her corncob doll with corn-silk hair. She sang in the church where her grandfather preached hellfire and damnation ("He used to scare the shit out of me!"), but in her mind, she was already at the Grand Ole Opry.

She got there with her signature vibrato, heartfelt songwriting, and a lot of hard work. Dolly often says that for a dream to come true, "you gotta put legs and wings and feet and hands and thought into it."

Not one to sit back and wait for whatever might happen next, Dolly has always moved on and made the best of things, even her childhood hardships. "I don't have any sympathy for myself," she says, "'cause it took all that to make all this." The rags-to-riches story is part of her mythology, as is her look, famously modeled on her hometown's floozy, whom she considered the epitome of glamour. Dolly, who doesn't think she's a natural beauty, believes that if you're not happy with something, you should fix it. When a reporter asks for her beauty secrets, she says cheerfully, "Makeup, lighting, and doctors!" Of course, the Dolly paradox is that her artifice is one of the most genuine things about her. "I look phony," she says, "but I'm totally real."

Dolly is also a woman of great mystery. She's been married for almost 50 years, but few have laid eyes on her husband, Carl Dean. According to Dolly, various tabloids, mistakenly believing they caught Carl on film, have run photos of her bus driver, gardener, and hairdresser. (Somebody is finally getting the exclusive on Carl in May, when the pair renew their vows, sell the photos, and donate the proceeds to Imagination Library, Dolly's charity promoting children's literacy.) She and Carl have never argued, Dolly claims—though she will admit, "We might get pissy and say, 'Why don't you go out to the barn?'" He's a loner, so she lets him be alone. That's her secret to a long and happy marriage, one that's somehow even survived show business: "He's always loved who I was, and I loved who he was, and we never tried to change each other."
-----

In the 52 years since she got off the bus in Nashville, Dolly's had 25 number one songs on the Billboard country chart. Though country is slicker these days and she gets less play, she's not putting down her guitar pick anytime soon. "I hope to fall over dead onstage right in the middle of a song," she says. "I'd be making music even if I had to sell records out of the back of my car." 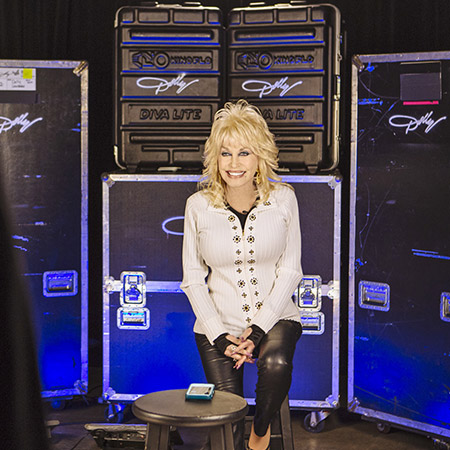 She feels sexy, she says, and she's still a flirt. She compliments one reporter on his striped socks and says to another, "Ooh, you're a big one!" During a photo op, Dolly's personal assistant, Judy Ogle (her childhood friend and the laconic, fresh-scrubbed yang to Dolly's yin), notices that her pant legs have ridden up. Dolly turns to a crew member and says, "Nothing like saying to a good-looking man, 'Will you pull my pants down?'"

But there's one thing Dolly's wrong about: that she's not a natural beauty. When she laughs and flashes those God-given dimples, she has a country girl's sweetness and a show girl's allure. Dolly flashes the dimples a lot. Wherever she is, the sun is shining: In fact, she's just been named to the Happiness Hall of Fame, whose board includes philanthropists and psychologists. Her publicist presents her with the award, a crystal obelisk that Dolly handles carefully, so as not to break her acrylics. She giggles—"That's funny, ain't it?"—then records an acceptance speech for the induction ceremony at Stanford University's faculty club: "Most people think I'm happy all the time. I say, 'Naw, I'm not happy all the time. That's just Botox!'"

It's a funny line, but there's truth in it: Nobody writes some 3,000 country songs because she's being carried through life by cartoon bluebirds. "I'm not always happy—that would be a very shallow person," she says. "I had a really dark time a few years ago, for instance, when I was overweight and going through the change of life. But finally I thought, Are you gonna sit on your fat ass, or are you gonna get some of that weight off?"

Work at being happy. If a person in a moment of acute despair saw that on a coffee mug, she might be tempted to hurl said mug at a wall. But when Dolly says it in her girlish twang, so sweet and simple, the words feel like truth.

People always ask the Dolly-Mama how to live a good life, but she doesn't like to tell anybody what to do. Even her ubiquitous quote "If you want the rainbow, you have to put up with the rain" isn't actually hers; it was just an old saying she was passing along. "The only advice I'd give would be the advice I follow myself," she says, "those good sayings like 'To thine own self be true.'" Anything she can't fix, she gives up to God. "We all need to have hope that there's something bigger than we are," she says. "Even if I knew for a fact that there was no God, I'd still believe."

Dolly has always prayed, but she didn't get saved at a tent revival, with all that hooting and hollering. She felt the presence of God in a quieter place, an abandoned church with a beat-up old piano where she could just sit and sing. When she heard God's voice, it didn't come from above, but from within.

"Sometimes I talk to God the way I'd talk to myself, like there's a higher wisdom in me," she says. "I'll get up real close in the mirror and look into my eyes to see if I can see something that ain't just me." She looks through her thicket of man-made lashes, through all the glittery, glorious fakery, to see if she can spot "any extra light." And you have to believe she finds it, sparkling and shining, the heart of a diamond disguised as a rhinestone.

High Notes: The Life and Times of an American Original 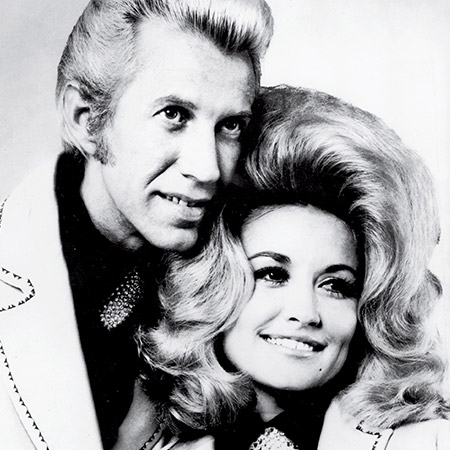 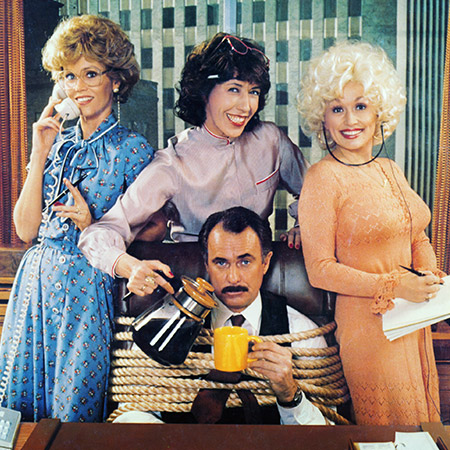 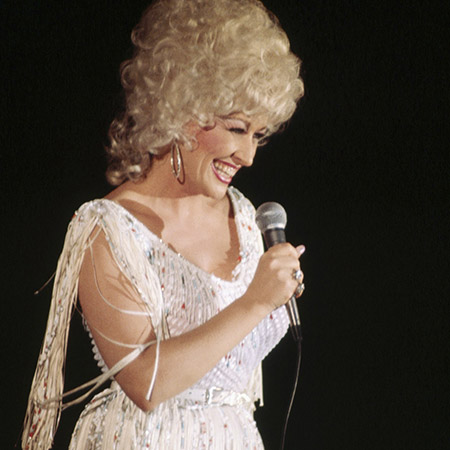 1981: Scores crossover hit with 9 to 5 theme, reaching number one on the Billboard pop chart. 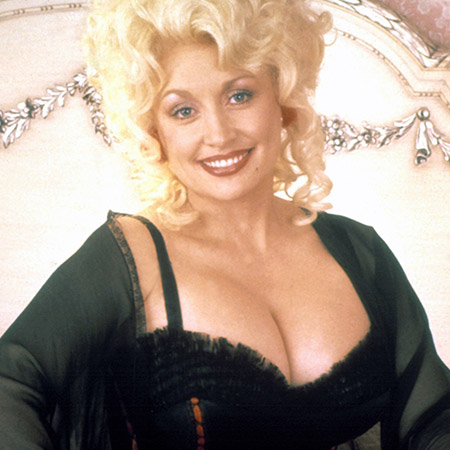 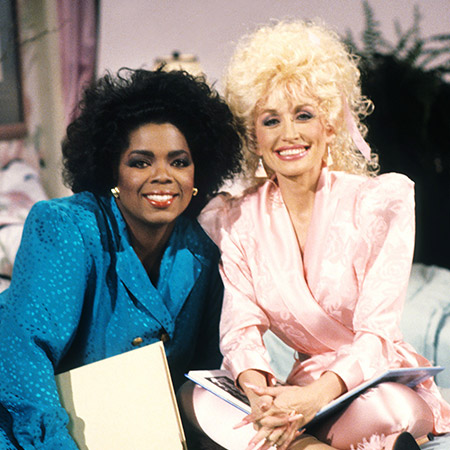 1987: Cozies up to you-know-who on The Oprah Winfrey Show. 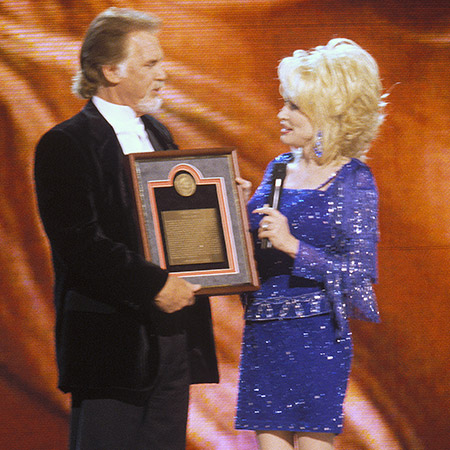 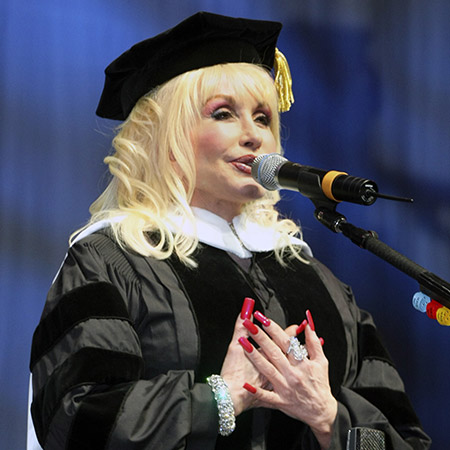 2009: Makes academic debut with honorary doctorate from the University of Tennessee, Knoxville.

2012: Does some holy rolling with Queen Latifah in the little-choir-that-could movie Joyful Noise.

More Inspiration
8 Historic Moments of Grace
A Divorce Mediator Reveals Her No. 1 Piece of Advice
What to Do If Your Friend Wants to Date Your Ex (and 2 Other Life Dilemmas)
How to Respond to Racist Comments
The Truth About Jealousy
Elizabeth Lesser Says Her Sister's Death Taught Her to Stop Holding Back
The Weekend Ritual that Keeps This Couple's Marriage Strong
6 Times I Can't Believe He Stayed with Me