Some days, grabbing your food to-go is unavoidable. Here's how to keep the nutritional damage to a minimum.
By Emma Haak The Burger-and-Fries Chain
Best bet: You came for the burger, so go ahead and get it. Add the vegetable works on top (lettuce, tomato, pickles, onions), but limit yourself to one high-fat topping. Pick the mayo, the avocado or the cheese—not all three. And if you really want to make it as healthy as possible, ditch the bun and wrap the patty and fixins in a large leaf of lettuce.

Stay away from: Value meals, which are calorie landmines. A large bundle meal (cheeseburger, French fries and a regular soda) can have up to 1,600 calories, according to research published in Preventing Chronic Disease. Don't kid yourself with veggie burgers, either. "Restaurants usually add extra fat, sodium and breadcrumbs to make the usually bland patties taste good," says Maria Bella, RD, founder of Top Balance Nutrition in New York. 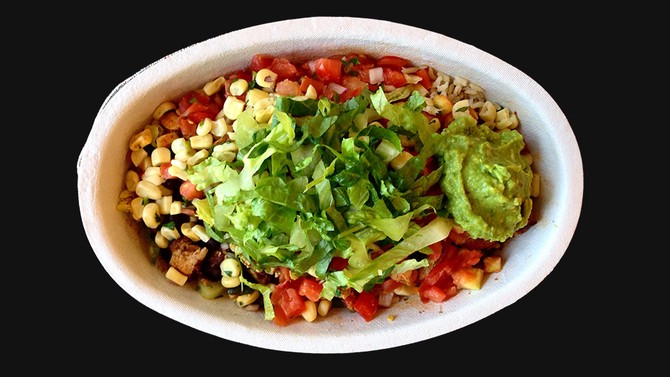 That Mexican Spot Where You Treat Yourself to Lunch on Fridays
Best bet: Burrito bowls or salads that give you all the tasty stuff that comes inside a burrito without the high-calorie tortilla (hold the sour cream and cheese). Soft tacos are another good choice because they're baked or grilled, unlike the hard variety, which are fried in oil or lard, Bella says. And if the restaurant offers grilled fish like tilapia or mahi mahi to add to your bowl, salad or soft taco, go for it. "It'll help you get your recommended 2 to 3 servings of fish per week if you're not likely to cook fish at home," says Jennifer McDaniel, RDN, founder of McDaniel Nutrition Therapy in Clayton, Missouri, and a spokesperson for the Academy of Nutrition and Dietetics.

Stay away from: Enormous burritos that could feed your family for a week. The burritos from one popular chain clocked in at an average of 900 calories, (customers guessed they were around 630), found a 2014 study in Public Health Nutrition. It's also best to avoid anything that's packed to the brim with cheese, like quesadillas and enchiladas. Be careful with your guacamole or avocado portion, too—you want just enough to add some flavor, not a 250-calorie dollop (roughly the amount in a large scoop you'd get at a restaurant). 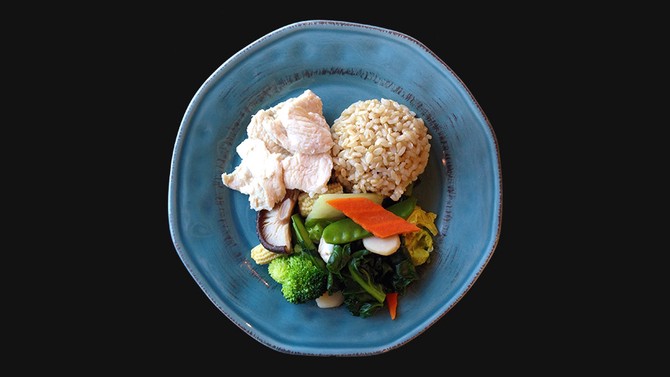 The Chinese Restaurant Where the Delivery Guy Knows Your Name
Best bet: Just about any Chinese dish can be made healthier by ordering it steamed with sauce on the side and brown rice instead of white, says Rebecca Scritchfield, RD, founder of Capitol Nutrition Group in Washington, DC. Healthier sauces include those with a garlic or black bean base. You'll probably have lots of lean protein options to choose from too, like shrimp, scallops, chicken and pork. Just be wary of tofu unless you know exactly how it's being prepared. "When it's deep-fried, it sucks up the oil like a sponge," McDaniel says.

Stay away from: Fried classics like General Tso's or Kung Pao chicken. Tso's has over 1,500 calories in one order, according to the USDA Nutrient Database, plus 87.5 grams of fat. Kung Pao clocks in at around 780 calories per order and 42 grams of fat. You can get the taste of either without the less-than-stellar nutritional profile by ordering steamed protein and vegetables plus a side of the specific sauce you're craving. 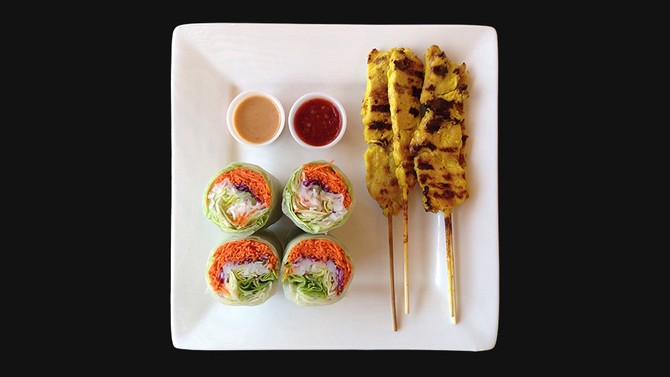 Your Go-To Thai Place
Best bet: To start, get summer rolls over spring rolls—the former is wrapped in rice paper instead of fried. For your entree, try chicken sate with sauce on the side, or Thai basil chicken, which is just chicken and basil in a spicy sauce.

Stay away from: Curries or coconut milk–based sauces and soups. "Coconut milk and peanut or fish sauces are the usual culprits in high-calorie Thai dishes," Bella says. If you're not sure what the sauce or soup base is, just ask. And know your limits with spice. "If a dish is too spicy for you, you'll reach for that box of white rice to cut the heat," McDaniel says. 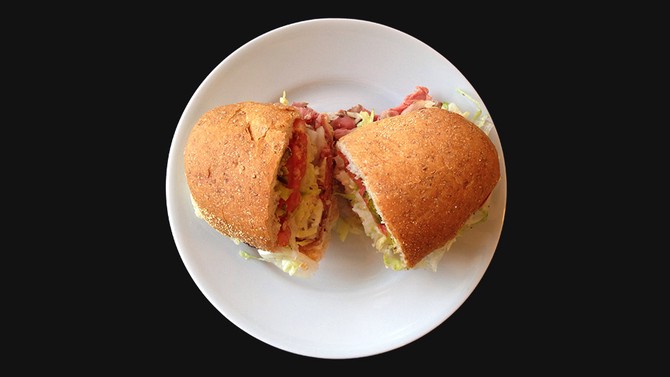 The Sub/Sandwich Shop Around the Corner
Best bet: Whole wheat bread, a ton of veggies, minimal fat on top (follow the same one-fat-source rule as you would with a hamburger) and roast beef, which is naturally low in sodium. (Other deli meats like turkey ham and even chicken can be high in salt.)

Stay away from: Wraps. "Everyone thinks they're healthy—maybe because they're thin or because you can get spinach ones, but those usually have little to no actual spinach in them," Bella says. The wrap alone could have over 300 calories in it. And if you're considering getting the supersize sub that costs almost nothing, thinking you'll eat half today and the rest for lunch tomorrow, think again. "We eat in units," says McDaniel. "The likelihood that you won't eat that whole thing in one sitting is really small." 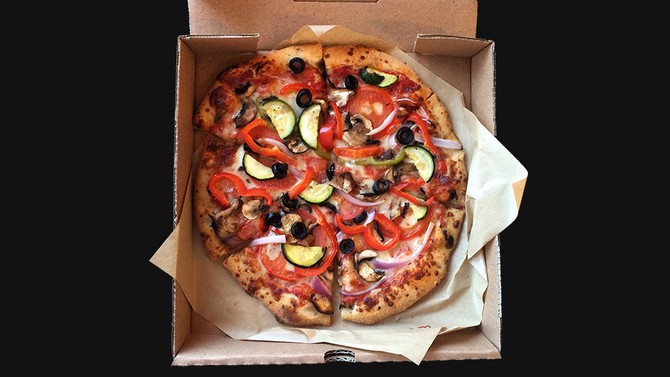 Your Neighborhood Pizza Joint
Best bet: Thin crust all the way. And make it whole wheat if possible. High-fiber vegetables give flavor and texture plus staying power to a slice without adding too many calories. But be realistic, though, about how many veggies you'll actually eat. Two kinds of vegetables (think mushrooms, artichokes, peppers or spinach) plus a lean protein like chicken is a good bet. "I tell pepperoni lovers to give Canadian bacon a try," says McDaniel. "It's leaner and lower in fat."

Stay away from: You know the meat-lovers' deep-dish bonanza is no friend to your waistline, but white pizza isn’t either. "It's often made with multiple cheeses and nothing else on top, so you're getting tons of saturated fat but none of the vegetables or lycopene you'd get from tomato sauce," Bella says. 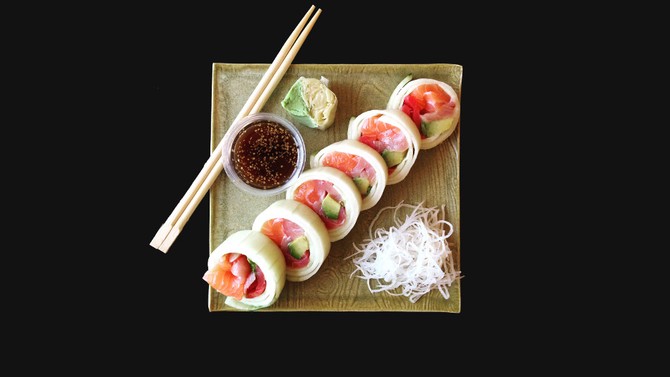 Your Usual Saturday Night Sushi Place
Best bet: Naruto rolls, which are wrapped in cucumber instead of rice and seaweed. For the filling, pick a lean protein like shrimp or yellowtail and add a vegetable, for a balanced meal. As for the soy sauce (1 Tbsp. can pack up to 1,000 mg of sodium, 2/3 of the daily recommended intake for people with hypertension and nearly half what people without hypertension should get in one day), try Bella's trick of diluting it. Add as much water as you can while still keeping it tasty.

Stay away from: Specialty rolls, especially ones where you're not exactly sure what's in them. You may be getting one that's loaded with mayo (in spicy tuna), cream cheese or tempura (fried fish, vegetables, chicken, etc.). Eel and avocado rolls are aren't exactly healthy, either. "They're usually topped with a sweet soy glaze that's packed with sugar and high in calories," Bella says. 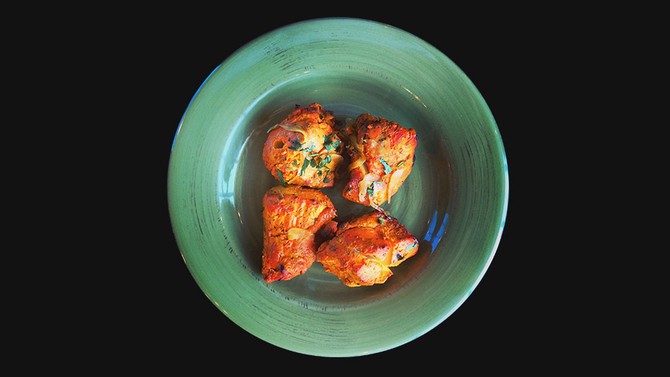 The Indian Restaurant You Keep Hearing Great Things About
Best bet: Tandoori dishes—they're roasted rather than fried, which keeps the calorie and fat counts down. Grilled meats are another healthy choice. And pick one carb— naan bread or traditional basmati rice, not both.

Stay away from: Sauces and curries made with cream, like masala or pasanda. If you're really craving those flavors, order the dish, but scoop the protein out of the sauce and onto another plate before you add your vegetables and bread or rice. That way, they won't soak up any excess sauce, Scritchfield says. Dishes with ghee, the clarified butter that's common in Indian cooking and has gained popularity recently among Paleo followers, should also be consumed in moderation because ghee, like any butter, is high in saturated fat and calories.
Published 07/21/2015
More Health and Wellness
10 Things You'll Find in Every Healthy Woman's Refrigerator
5 Healthy, Sustainable Ways to Snack
4 Ways Eating Like a Viking Can Help You Lose Weight
5 Essentials for Packing a Healthy Lunch
5 Things Nutritionists Do After Vacation
5 "Healthy" Habits That Might Actually Be Hurting Us
The Worst Foods to Eat at Holiday Parties
The 6 Worst Things to Eat When You're Starving