What if you could ease the agony of a backache or migraine without a prescription? You just might be able to—by swapping pills for supplements.
By Dr. Mehmet Oz 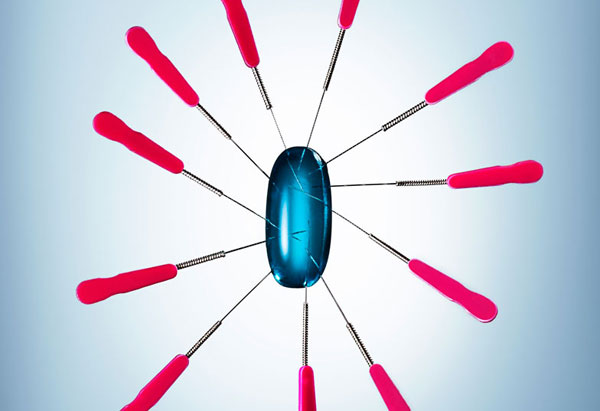 Photo: Dan Selinger
Piercing, shooting, burning, stabbing—even the vocabulary of chronic pain is distressing. Most people who live with it would do almost anything for relief. But medication can compound your problems with other risks: Narcotic painkillers and nonsteroidal anti-inflammatories (NSAIDs), for example, may cause gastrointestinal bleeding, heart attack, and stroke. The good news is, researchers are demonstrating that alternative remedies can complement and sometimes even replace these heavy-duty drugs. A few I swear by:
The Pain: Lower backache Nature's RX: Devil's claw
The Khoisan tribes of the Kalahari Desert used this herb as a pain remedy for thousands of years before it was introduced to Europe in the early 1900s. One study found that devil's claw—which contains an anti-inflammatory agent called harpagoside—was just as effective as the prescription NSAID Vioxx, which was immensely popular before it was withdrawn from the market due to its cardiovascular side effects. I recommend taking an extract that provides 50 to 100 milligrams of harpagoside daily for as long as your pain lasts.
The Pain: Migraine Nature's RX: Butterbur root
When a migraine strikes, cells in the brain release chemicals that cause inflammation. By interfering with some of those chemicals, butterbur can provide relief. In a study of migraine patients, 68 percent of those who took butterbur root reduced their number of attacks by at least 50 percent. Take 75 to 100 milligrams twice a day on an ongoing basis.
The Pain: Arthritis Nature's RX: Fish oil
A 2009 study on osteoarthritis showed that people who regularly took a supplement rich in fish oil were able to reduce their use of pain meds by half. The oil's omega-3s help decrease the production of various chemicals that cause inflammation and pain in the joints. Look for a supplement that contains both EPA and DHA omega-3s, and take four to six grams a day.
The Pain: Menstrual cramps Nature's RX: Vitamin E
Cramping is attributed to hormone-like compounds called prostaglandins, which cause the uterus to contract and expel its lining; women who have higher levels of prostaglandins get more intense cramps. Vitamin E can lower the levels of prostaglandins, and studies have shown that it can significantly reduce menstrual pain. Begin taking 400 IU a few days before your period, and continue through the first three days.
Next: Dr. Oz on the dangers of mixing meds
From the October 2011 issue of O, The Oprah Magazine
As a reminder, always consult your doctor for medical advice and treatment before starting any program.