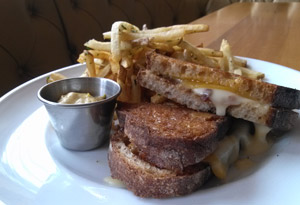 For the bacon marmalade:


Make the marmalade: In a heavy bottomed pot, render the bacon until slightly browned. Remove the cooked bacon bits from the pot and pour off all but 2 tablespoons of the fat. Sauté the onions in the bacon fat until translucent. Add the vinegar, sugar, syrup and coffee to the pot. Once the sugar liquefies, add the bacon back to the pot and cook slowly until concentrated. Cool and store, refrigerated, for up to three weeks.

Lay out four slices of the bread and top each with one slice cheddar, one tablespoon of the bacon marmalade and divide the cubed taleggio between each of the four sandwiches. Top each with the top piece of bread and spread the soft butter on the top and bottom of each sandwich.

Cook on a flattop or wide sauté pan over medium high heat until the bread is toasted and the cheeses are melted. Serve immediately.