Surviving the Worst with Bear Grylls 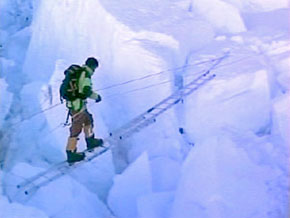 PAGE 3
There is one place this 35-year-old father of two says he'll never visit again—Mount Everest. Bear says he'd dreamed of climbing the world's tallest mountain since he was 8 years old, but that adventure was nearly his last.

During Bear's expedition, four fellow climbers died on the mountain. "It shook a lot of my confidence," he says. "I'd always been such a fearless climber. … I knew the statistics of one in six people don't come back from the summit, but I think when you see it close up, and you see stuff go wrong, in many ways, I came back less confident than I think I went."

Bear almost didn't make it back at all. At an altitude of 19,000 feet, he fell 200 feet into an icy crevasse. Luckily, he says his best friend, Mick, pulled him to safety. "I'm definitely not brave enough to go back there again," he says. "I was lucky—lucky to get away from that mountain. I'm a dad now. [It's] no good being a dead hero for two little boys."

While on Mount Everest, Bear says he learned that it's okay to need people sometimes. "Beforehand, I always want[ed] to be strong and independent. Life's not like that. Whether it's my job on Man vs. Wild or doing talks or climbing mountains or just being a husband…"

"It's about cooperation," Oprah says.