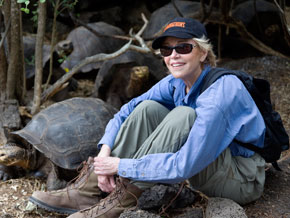 Photo: Vanessa Vadim
When I became single—again—in 2000 at age 62, I decided the time had come to make a list of all the places I wanted to go and things I wanted to do before I got too old.

This is what they call a "bucket list." My intention, however, was not just to do these things myself, but to try and turn them into fundraising adventures to benefit my nonprofit organization, the Georgia Campaign for Adolescent Pregnancy Prevention  (G-CAPP).

I founded G-CAPP in 1995 when Georgia had the highest rate of teen pregnancy in the United States. I knew that adolescent parenting is far greater where there is poverty and its attendant hopelessness. The disadvantaged parents of the youngsters who have babies too soon tend to have been teenagers themselves when they became parents. Now their children follow their example, creating an intergenerational transfer of poverty. When children have babies before they themselves have grown up, gotten an education and a means of supporting themselves, the likelihood of their having a productive, middle-class life is greatly reduced.

Pregnant girls tend to drop put of school, and young fathers tend not to hang around to parent their child, thus depriving the child of that critical, loving male presence. I knew that the absolute best way to prevent disadvantaged young people from engaging in risky behaviors, including unprotected sex, was to help them envision a future for themselves that would be compromised if they had babies and didn't finish their education. Hope, we were discovering, was the best contraceptive. Fourteen years later, G-CAPP's work is to provide that hope in a future. It is what we call "above-the-waist work."

More Inspiration
3 Ways to Do Good (and Feel Good) on Your Next Vacation
Clean Power: Lisa Jackson Fights for Our Right to Healthy Air, Water and Land
How David de Rothschild Lives His Best Life
On Board the Plastiki
11 Ways to Save Your Planet
5 Wallet-Friendly Habits You Can Steal from Eco-Experts
An Amateur Rancher Brings the Wastelands of the Southwest Back to Life
The Woman Who's Inspiring a New Generation of Black Farmers