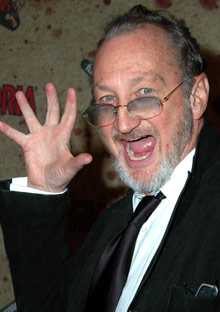 Photo: Barry King/WireImage.com
PAGE 12
My First Scare
Robert Englund, director of the horror comedy Killer Pad; actor who played the character of Freddy Krueger in A Nightmare on Elm Street

As a child, I was obsessed with movies. I would get dropped off at this wonderful old theater in Laguna Beach, California, that had murals of pirate ships and Spanish conquistadores done in an ornate rococo style. They had a children's matinee—cartoons followed by children's programming—but on occasion the programming changed to adult fare earlier than it should have. This is how I ended up seeing The Bad Seed, that old warhorse of a play that was made into a movie, with the incredible child actress Patty McCormack as a perfect little girl who's a killer. It opens with her pounding on the hands of a child at summer camp as he holds on to the end of a pier—her tap-dancing shoes leave a crescent-shaped wound on his hands. She's doing this because he won the penmanship award that she wanted. My buddies and I, little white-bread jocks with our flattop haircuts and high-top Keds, were terrified. And I developed a real fear of braids on girls, because she wore braids. Unfortunately, I was a child of the fifties, so every girl wore her hair like that. I had to sit behind one in school—with that really severe part in the back. It gave me the creeps. I don't like that Heidi look. I know it's a sexual fantasy for some men, but it just doesn't work for me. Feel free to mock me, but I see braids and want to zip it up and run. Years later, in a subliminal way, even Princess Leia freaked me out. I'm sure Freud would have something to say about that.

From the February 2007 issue of O, The Oprah Magazine