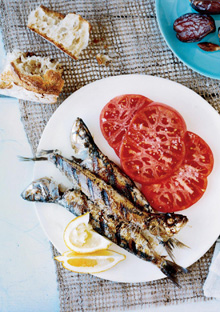 Photo: Ditte Isager
Last year I took the children on holiday to Morocco, where we spent much time feasting, either with our eyes in the market or with our bellies in the cafés and restaurants. One meal in particular marked a highlight. We were staying in Essaouira, a town with such an atmospheric and photogenic medina that it has remained a popular film location since Orson Welles chose to shoot there for his Othello. Setting out from the fishing harbor, we took a camel ride up the coast along vast deserted stretches of windswept golden sand, past the ruined forts and castles, which are said to be the inspiration for the Jimi Hendrix song "Castles Made of Sand." Camel rides are notoriously uncomfortable, except this one wasn't—we lolled back on hugely overstuffed palanquins, going with the motion as if rolling with the waves. After a couple of hours we branched off at a small river and rode inland, seeing nothing but the occasional house and a few tree-climbing goats. When we stopped for lunch, our guide quickly swept together some leaves and twigs as kindling while the children collected bigger sticks. From somewhere in his saddlebags, he produced two dozen sardines, which he had caught that morning, and grilled them on the open fire. There was fresh bread and heavenly tomatoes. For dessert we ate dates. It was the simplest of meals and the most delicious. Why? It had been a long ride, for one thing. Food tastes better when you're hungry. How easy that is to forget! Everything was fresh and unprocessed and tasted of itself, no need for dressing up. And there was time for a doze beneath the acacias while the children fed the leftovers to the camels.

Monica Ali's latest novel, In the Kitchen (Scribner), came out in June.

From the August 2009 issue of O, The Oprah Magazine

More Inspiration
11 Ways to Save Your Planet
How David de Rothschild Lives His Best Life
An Amateur Rancher Brings the Wastelands of the Southwest Back to Life
A Young Entrepreneur Brings Solar Power to the Masses
One Woman Takes a Brave Stand Against Factory Farming
Count Sheep, Not Harmful Synthetics: How to Find an Eco-Friendly Mattress
What's the Eco-Impact of Your Everyday Choices?
3 Ways to Do Good (and Feel Good) on Your Next Vacation