The Unadorned Freedom of Going Gray

After dyeing her hair every color in the rainbow, Lisa Shea dares to try the only shade left.
By Lisa Shea 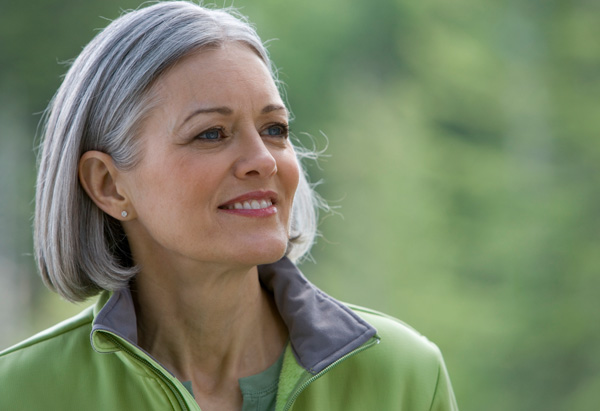 Photo: Thinkstock
My first gray hair appeared when I was 23 years old, in graduate school, busy, restless, dating around. I didn't mind finding the silvery gray strand. It was rare, a novelty, almost cool. I plucked it, twirled it around in the garish fluorescent light of my dorm room, inspecting its alien otherness, then threw it away. Who knows where it landed?

By my mid-thirties—married, divorced, remarried, about to separate, a mother—the gray had become a spooky reality. The strands had a different texture; they went every which way, gaining unruly ground over my tamer chestnut hair. For the first time, someone, a young man, called me ma'am. That was it. I began the ritual of coloring—at home, over the sink, slippery squeeze bottle, dark brown goo, tiny packet of cerulean blue cream rinse, and flimsy plastic gloves.

A decade later—single, head of household, not even dating—something happened that made me decide to stop. At a playground where my 9-year-old son still likes to monkey around, a little girl with hair the color of corn silk came walking toward me, her eyes fixed with a scholar's attention on my head. "Your hair," she said, pointing her small finger up at me. "It's orange. No, it's pink." She came closer. "Actually," she said after further moments of deepest scrutiny, "it's purple. And red."

She was right. After years of trying to hide the advancing gray with a dye that gradually rinses out—the only kind that doesn't leave me with a rash—my hair, which I keep long, had become a weird rainbow of colors. That little girl, half innocent, half sage, was the trigger that finally convinced me to be brave about my hair, to stop covering up and embrace the neutral palette that was evolving under all those bizarre hues.

When I told my mother that I had stopped coloring my hair, she exclaimed, "But it will make me look old!" I laughed, but she was serious. Going gray is serious. It has associations with states of cheerlessness and gloom. No wonder my mother was freaked out.

Six weeks later, when we were together during the difficult and dramatic occasion of my father's death (my parents had been divorced for more than 30 years), my mother's eyes widened when she saw the gray at my temples and the crown of my head. "Oh, Lisa," my mother said, "you look so like your father!" She reached up and smoothed back a wild gray strand. I didn't tell her that I had asked the undertaker to cut a small swatch of my father's still thick silver-white hair—a talisman to give me courage—before he was cremated.

All my previous attempts to stop coloring my hair had failed. Whenever the color started to rinse out, I'd look in the mirror and see the insidious gray spreading like hoarfrost over my head. This isn't me, I'd say to the mirror. This is an older woman, someone I wasn't ready to be, the aging not-I. Back I'd go to the sticky gloves and goofy head garb and the messy, messy goo.

Mercifully, going gray is gradual (it grows an inch a month, my no-nonsense hairdresser, Charmaine, told me). It is also intense, like revealing a secret you've tried to conceal for years. But it has freed me from the tyranny of trying to look younger and from the awkwardness of having hair that appeared to be a different color every time it was seen under a new light. "Is it aubergine, coffee, brownish, orangish, cocoa, blue-black?" friends and acquaintances would inquire.

Before going gray, I had begun hoarding bottles of hair dye. The line was being discontinued, and I couldn't bear the thought of running out. It became a mission, hitting drugstores to hunt down the little brown bottles. And yet secretly, I wanted release from the burden, the expense of maintaining my no-longer-youthful head of hair. Still, I've kept the bottles, 20 or more, at the bottom of my linen closet, in case of panic, in case cowardice sets in.

So far the response to my graying adventure has been amazingly positive. Women friends have confided that they've thought of trying it. A couple of male friends have said it's sexy. One colleague told me she thought the gray was my best feature. My favorite response has been my son's. "You look like Cruella De Vil," he said, "only nicer."

Lisa Shea is the author of the novel Hula (Norton).

More on Aging
From the April 2001 issue of O, The Oprah Magazine