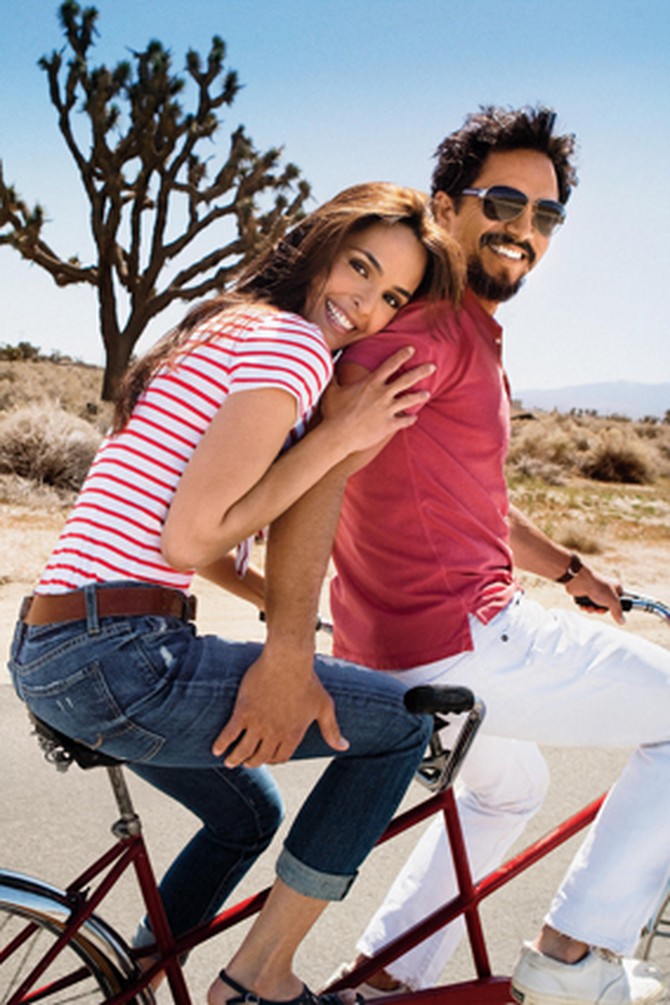 Easy Riders
Jeans used to be rebel-without-a-cause clothes, but these days they're as iconic as the Washington Monument. Talisa, like women everywhere, has adopted them as her everyday uniform. Her skinny blue denim pair (7 For All Mankind, $198) is rolled up, '50s-style, and anchored with a rugged vintage belt (Screaming Mimi's); the low-cut, front-tied striped tee (American Living, $40) is a sexy take on an old standard. 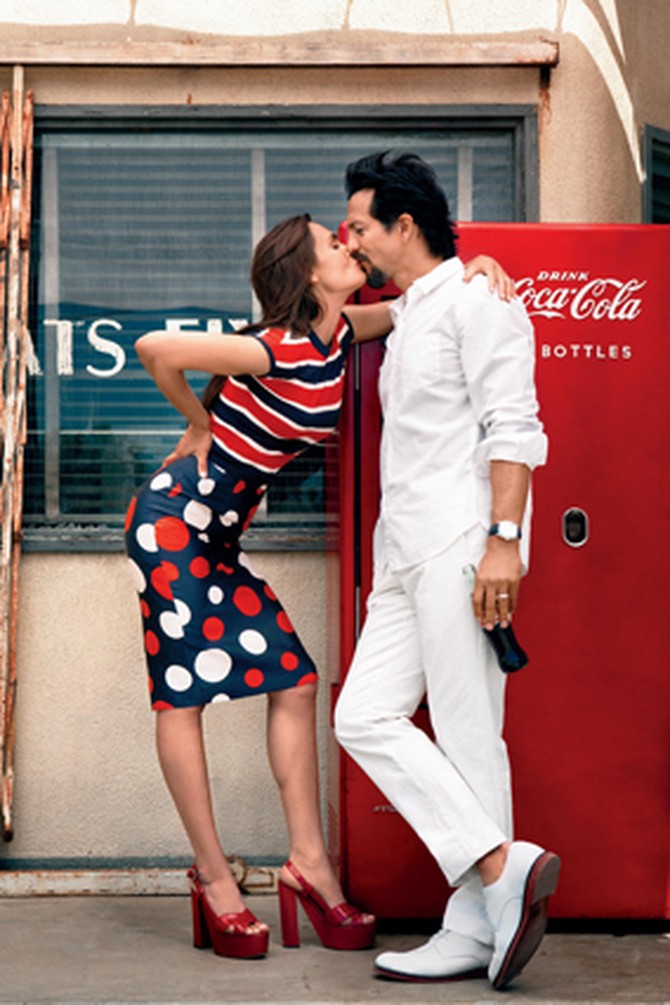 Short Order
On the beach or in a diner booth, this racy mini (Members Only, $187) has serious allure, especially with strappy red heels (Charles David). "I love the femininity of a little summer dress," says Talisa, although she admits that life with two children (Sophia, 6, and Mateo, 3) doesn't always lend itself to glamour. She calls family "our number one priority"—she's put her career on hold until the kids are older. But she does have a small part in the upcoming film La Mission, which Benjamin says is "a labor of love"—he stars, and his brother Peter wrote and directed it. Slated for fall release, it's the story of an old-school Latino father and a gay son in San Francisco. 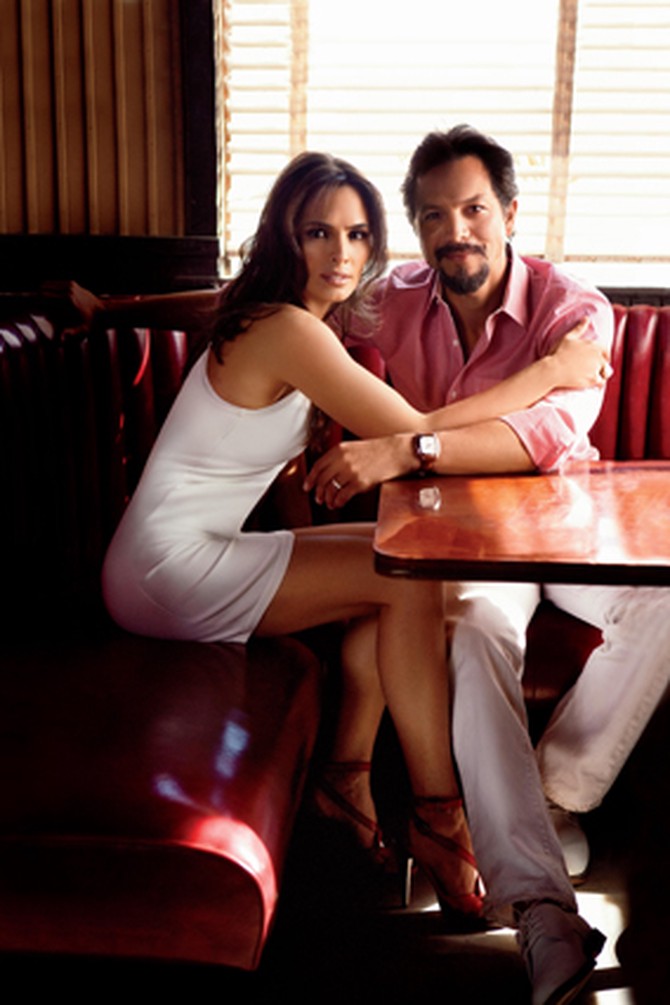 Pop Shop
The mixed prints in Talisa's playful ensemble (Michael Kors top, $559, and skirt, $895) are kissing cousins—exaggerated, larger-than-life versions of traditional patterns—which is why they work so well together. (The shapes are classic, and either piece would also look sharp paired with a solid color.) Shiny red Betty Boop shoes (Michael Kors) continue the whimsical mood.

Benjamin's pristine outfit (shirt, J.Crew; pants, Trovata) suits his TV role; in The Cleaner (A&E) he plays a kind of white knight—a radical interventionist (based on a real-life hero) who rescues people from the throes of addiction. The season two premiere is June 23, 2009. 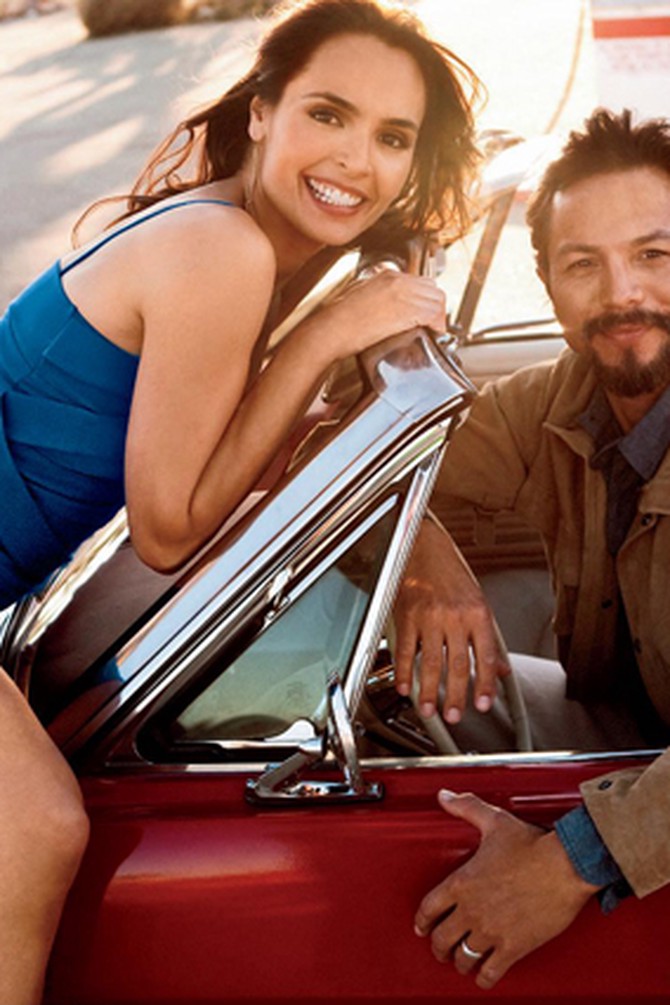 American Idyll
Following the fabled Route 66, the Bratts get their kicks in a vintage Mustang. "The older American cars weren't made for economy, but they have unmatched personality," Benjamin says. Talisa poses for a Kodak moment in a short royal blue dress (Sweetface, $298; earrings, Ten Thousand Things). 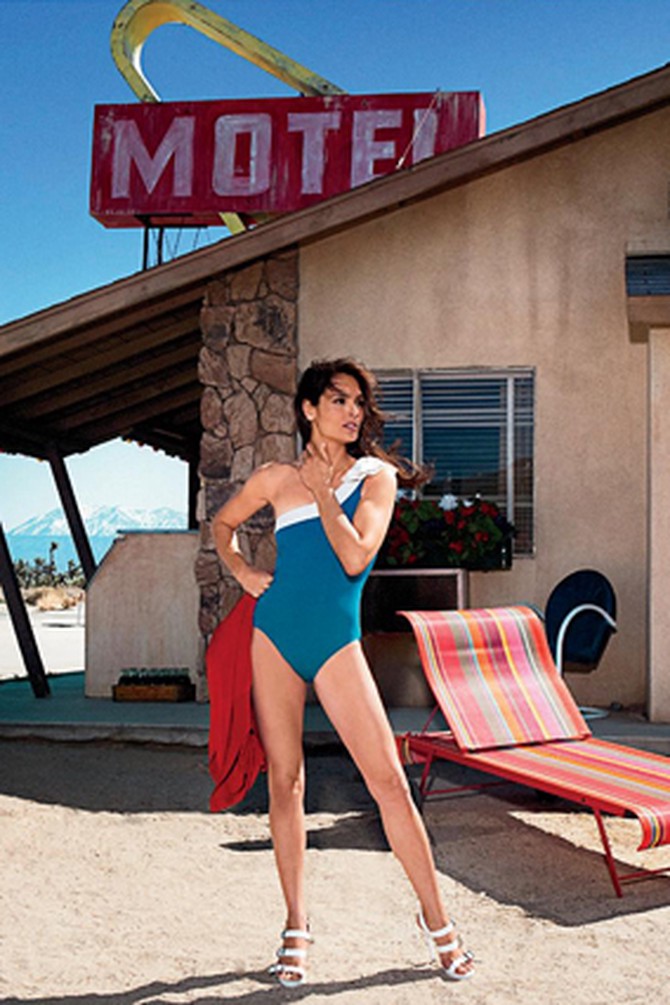 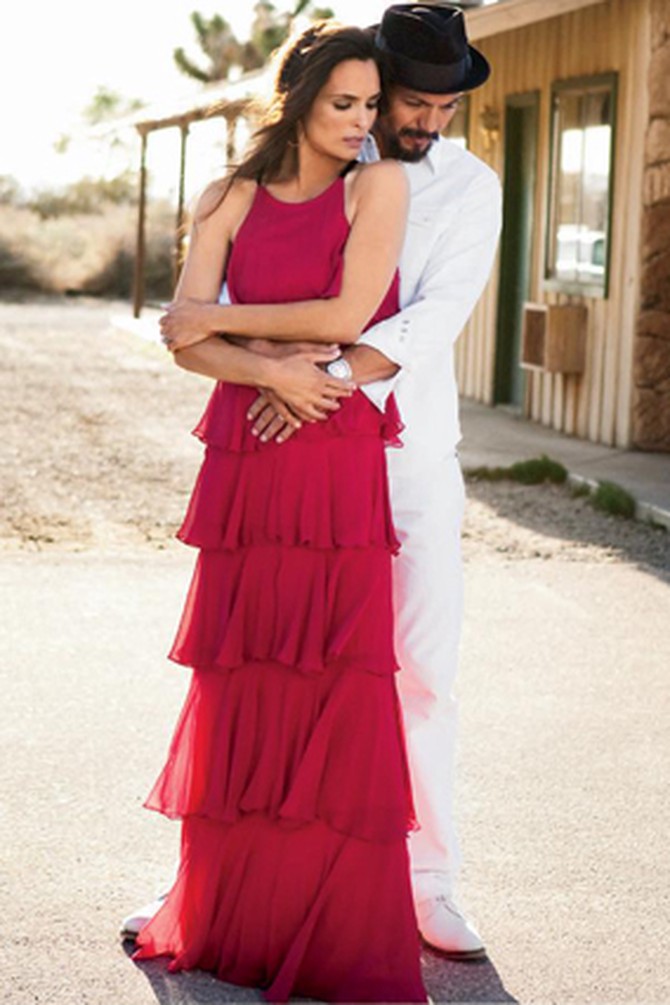 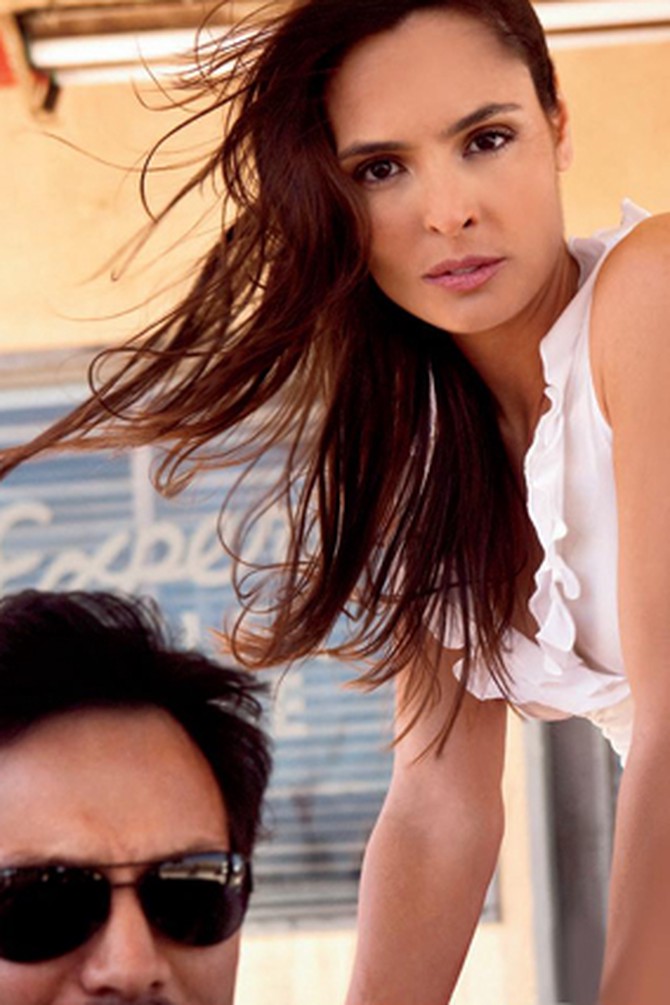 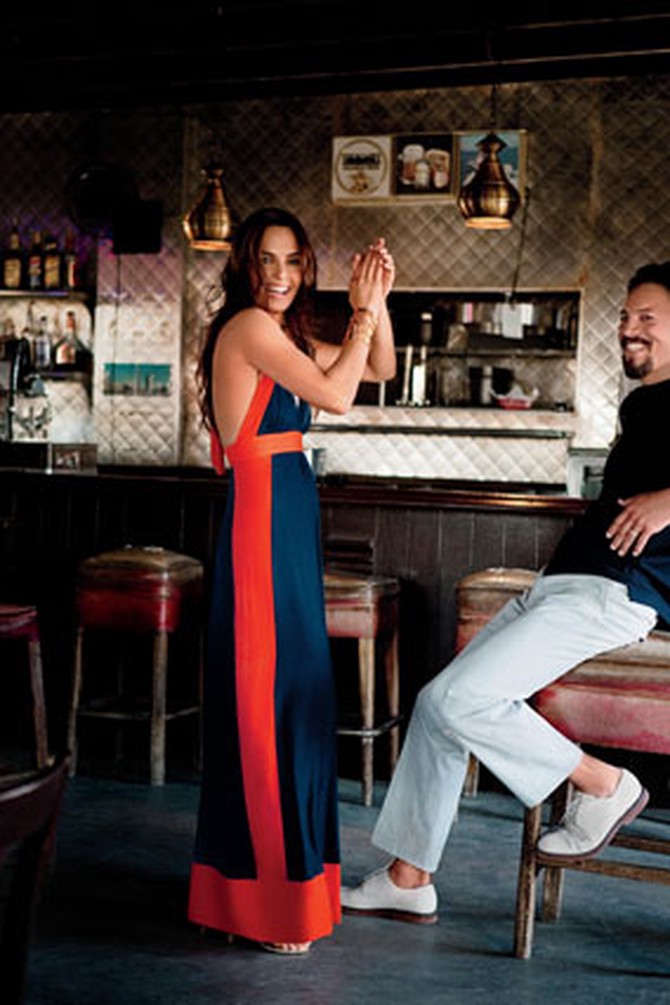 Rhythm and Blues
Here's the ultimate democratic dress (T-Bags, $211): packable, well priced, great for beachcombing or parties, and suitable for any shape, thanks to an unconstricted fit and body-lengthening stripes down the sides. And it demonstrates a smart warm-weather strategy: showing a gorgeous back and shoulders while keeping the rest of you under wraps. It's a grown-up way to do sexy. 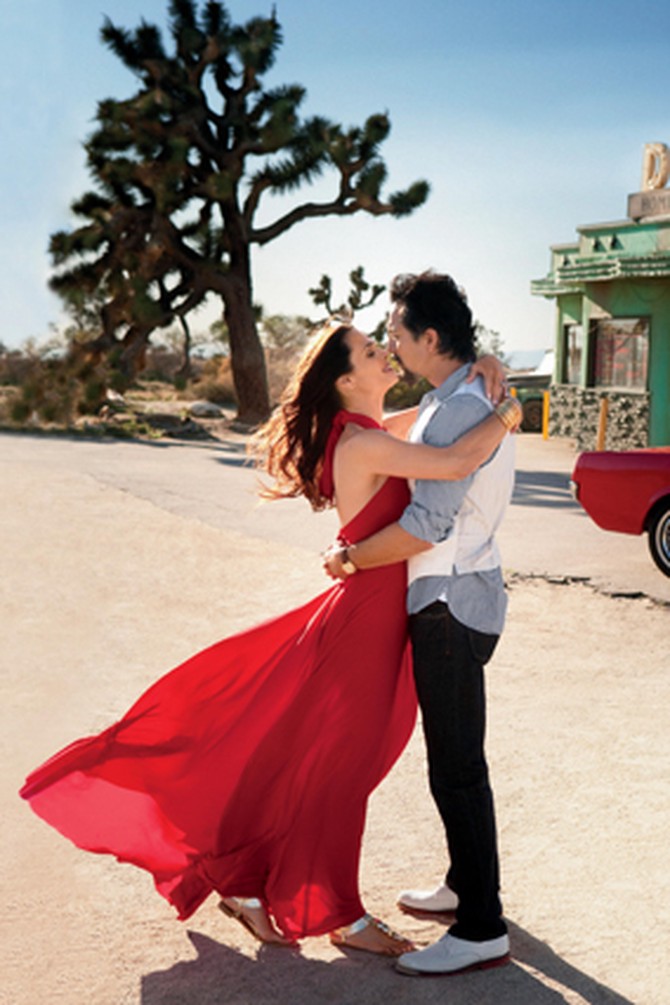 Family Ties
"Benjamin works long hours, and when he's home I have to share him with the kids—so I love days that he's all mine!" says Talisa. She looks thoroughly embraceable in this full-skirted halter dress ($550) from OMO Norma Kamali, a designer known for her terrific jersey clothing. Gold accessories—bangles (Melody Rodgers Collection) and sandals (Old Navy)—are a great foil for red, white, or blue, making potentially preppy colors look much more polished. 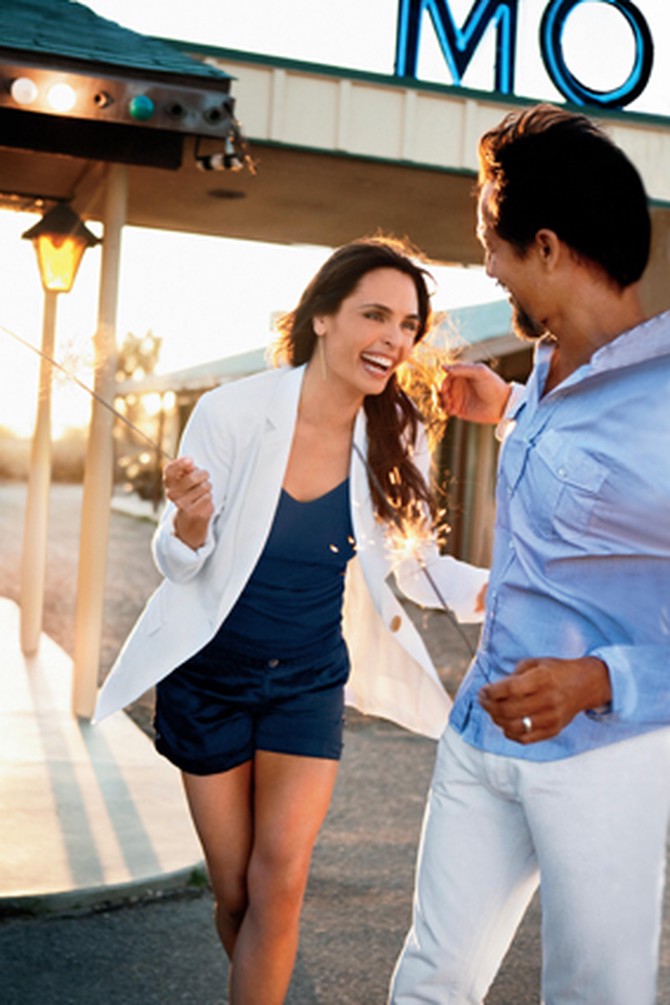 Star-Spangled Summer
he Bratts' heritage reflects this country's diversity: He is of Peruvian Indian extraction; she was born to a Puerto Rican family in Brooklyn. "I once took a cross-country trip and was struck by how similar Americans are," Benjamin says. "Most people I met had the same notion of possibility." That's a happy thought for a July 4 celebration complete with sparklers. To pull off the slouchy boyfriend jacket trend (Talbots, $279) without looking oversize yourself, wear something sleek and solid underneath, like a navy tank (Old Navy, $11) and hemp-silk shorts (Stewart+Brown, $198).

From the July 2009 issue of O, The Oprah Magazine
More Fashion & Beauty
Warm-Weather Basics with 2010 Flair
How to Stretch Your Summer Wardrobe
5 Red-Hot Shoes—and How to Wear Them
7 New Ways to Wear Khakis
7 Bright and Sunny Looks to Try This Summer
Step Right Up: Fabulous Fashion Goes to the Circus
Dress 10 Pounds Slimmer
Adam Glassman's 7 Rules for Wearing White Right