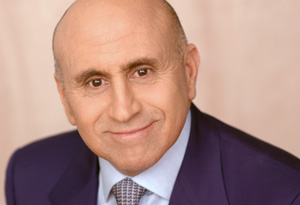 Photo: Melissa Hamburg
PAGE 2
Years ago, I had a new patient who told me that he was a judge, and he took his job and the legal system very seriously. But the problem was he had a scowl on his face, and he looked perpetually angry. His eyebrows were shaped downward, and his brow was descending, so he really did look like a mean, angry person.

"It really bothers me that people in my courtroom are scared of me and make snap judgments about my feelings because I look this way," he told me. "It's affecting my work. Can you help?"

In this case, I could, so I performed a face-lift. He was ecstatic afterward. It was a subtle transformation—he just looked happier. He later told me that his colleagues thought he'd gotten married because he seemed so pleased all the time. They had no idea he'd had work done.

This patient was a perfect example of someone with healthy vanity. He knew what was wrong—that he looked mean due solely to anatomy—and was willing to do what it took to change it.

One simple step you can take in your quest to nurture healthy vanity is to be conscious of your reaction to a compliment. It should be a simple "Thank you" rather than a negative, guilt-tinged reaction, such as: "This old thing? Oh, I got it on sale." If someone tells you your hair looks terrific or your dress is pretty, the effort you've put into your appearance has been noticed, and in the nicest way. Healthy vanity means you appreciate being noticed. Narcissism means you expect to be noticed because you're sure you deserve to be.

Can you tell the difference between healthy vanity and narcissism? Take the quiz

Dr. Tornambe has lectured in the United States and Europe and is considered an expert in cosmetic facial and breast surgery. He was listed in New York Magazine's "The Best Doctors in New York." Dr. Tornambe has appeared on Dateline, NBC's Today and The Charlie Rose Show, and he was the only New York City-based plastic surgeon to appear on the ABC series Extreme Makeover. His latest book is a The Beauty Quotient Formula (Hay House).

More Health and Wellness
Dear Every Woman I Know, Including Me
Why You Should Be in Awe of Your Flaws
13 Ways of Looking at My Body
9 Lies to Stop Believing About Your Body This Year
Martha Beck’s Guide to Self-Acceptance
4 Things That Are Fine Just the Way They Are
How to Stop the People You Love from Making You Fat