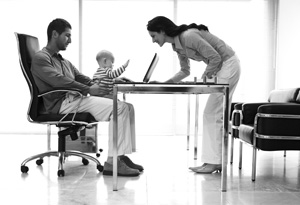 Photo: Goodshot/Thinkstock
PAGE 2
About two weeks after the transfer, the call came in from the nurse at their doctor's office. Melissa, a teacher, sat at the front desk at her school, with the landline on speaker and Seth on her cell phone.

"Congratulations! You're going to be parents!" the nurse announced.

Everything was finally coming together for Seth and Melissa.

Over the course of the following weeks, all of Melissa's tests indicated normal progress, and when it was finally time for the ultrasound, they were both beyond excited. As Melissa lay on the examining table, the doctor probed her stomach.

"There are two heartbeats," he said. But then he cautioned, "One is strong and the other is faint. Chances are you'll have one healthy baby."

How could they argue with that? One healthy baby was all they'd wanted.

Another week passed, and Melissa and Seth headed back to the doctor for ultrasound number two. This time, as the doctor leaned in to look at the screen, his eyes widened and he whispered something inaudible to the technician. Melissa and Seth's hearts raced in unison. Was there something wrong with the baby?

"Wow! You're having identical twins," the doctor declared. "And there is still another heartbeat there, as well." Three babies!

"There better not be four the next time we come in," Seth joked, though he was confounded more than anything. Two he could handle. Three at one time—he wasn't so sure.

But by the third ultrasound, the other embryo had reabsorbed, and Seth and Melissa were simply thrilled to be carrying identical twins with strong, healthy heartbeats. Life was good.

And it continued to be good, despite some routine bleeding and a trip to the emergency room, which confirmed that not only were the twins doing well, but that Melissa was carrying two boys!

At twenty weeks, Melissa was waddling around her classroom—measuring, looking, and feeling seven months along—unaccustomed to any extra weight on her five foot two frame. It was a Tuesday, and, just like any other day, she made her way around the room, tidying up after her students. As she continued her cleaning, suddenly there was pain—intense pain in her stomach and back, followed by a trip to the doctor.

More Inspiration
How to Make the Hours You Waste Online Actually Mean Something
My Best Life: Emily Blunt
Local Hero: Emily Kerr Connects Coffee Lovers with Small-Scale Farmers
A Prayer for Everyone on September 11
How Candy Chang's Public Art Projects Are Changing Communities Everywhere
Leelee Sobieski's Aha! Moment: Why You Need a Day of Rest
Why Choice Is the Way to Happiness
What Oprah Knows for Sure About Keeping Calm