Having an animal in your home is great for your heart—and your waistline, your immunity, your blood vessels....
By Dr. Mehmet Oz 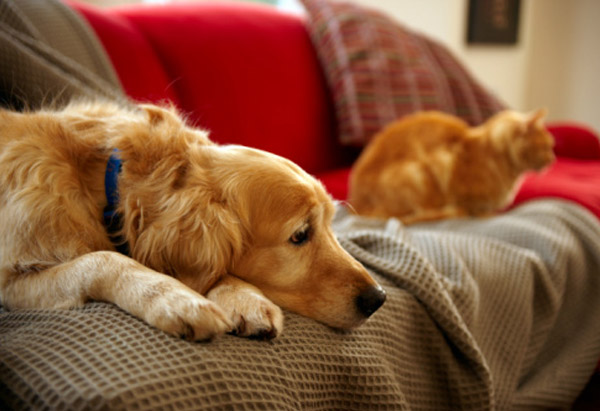 Photo: Thinkstock
When I come home after a long day at the hospital or the studio, the greeting I get from my black Lab, Rosie—her whole body wiggling with happiness—always makes me smile, no matter how exhausted I feel. In our household, animals outnumber humans: We also have a rabbit, five hamsters, three cats (who spend a great deal of their time peering inquisitively at the hamsters), and two tropical fish. I admit I sometimes feel like a zookeeper. But even when the litter box needs cleaning or I have to coax my son, Oliver, to go outside and walk Rosie before bedtime, I can honestly say I'm happy to share my home with all 12 creatures.

If you've ever loved a pet, you know the kind of joy animals can bring. But I'm especially excited about the mounting evidence that they can improve our physical well-being, too. (Former president of the Mayo Clinic staff, Edward Creagan, MD, is so convinced of the healing powers of pets, he has literally prescribed them for a third of his cancer patients.) Here's a look at how your health might benefit from an animal companion.

People with allergies produce antibodies—which can cause inflammation in the airways (asthma) or the skin (eczema)—in response to irritants like dander and saliva. But exposure to a pet during infancy may mean less chance of developing such reactions in adulthood—possibly, scientists speculate, because the immune system becomes desensitized to allergens. What's more impressive is that this immune-stabilizing effect appears to begin before birth. A 2008 study showed that prenatal pet exposure lowers allergic antibody production in the umbilical cord.

The simple act of petting an animal—or even gazing at an aquarium—results in a drop in blood pressure. And pets can have a longer-term impact on the cardiovascular system, too, as researchers discovered when they tracked 24 hypertensive stockbrokers who adopted a cat or dog. Pet ownership blunted the blood pressure response to mental stress; the traditionally prescribed hypertension drug did not.

Researchers who followed 369 heart attack survivors in the landmark Cardiac Arrhythmia Suppression Trial found that dog owners had only a 1 percent chance of dying within a year, compared with a 7 percent chance for subjects who didn't have a dog. A newer study, from 2009, found that people who had owned a cat at some point in their lives were 37 percent less likely to die of a heart attack than those who hadn't.

Next: Why pets are good for your body and mind
From the April 2012 issue of O, The Oprah Magazine

More Inspiration
Highlights from O You! 2011 in Atlanta
Meet the Graduates of the Oprah Winfrey Leadership Academy for Girls
It Will All Work Out: Letters to My Younger Self
Take the Leap: Why Change is Good
What Women Can Learn from Men
Puppy Love: Why Raising a Dog Changes You (Even When You Can't Keep Him)
Help Victims of Domestic Violence—by Saving Their Pets
Dr. Phil: The Powerful Ability That Will Help You Manage Your Life