Nothing gets our hearts racing like a little harmless terror—so why not harness what frightens you to make your life richer?
By Martha Beck 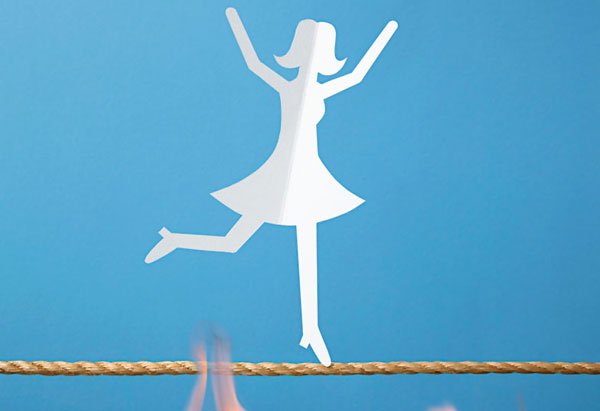 Illustration: Holly Lindem
Fear is a terrible sensation, one we never, ever want to feel. How lucky we are to live in a time and place where it's so often possible to avoid the things that scare us most: violence, disease, natural disasters, dangerous animals, and, at least until the very end, death. Instead, we get to sit around on our widening behinds watching television shows...about violence, disease, natural disasters, dangerous animals, and death.

I noticed a long time ago that fear often comes packaged with enthrallment. We don't look away from accidents or guns; we give them our rapt attention. This tendency has obvious evolutionary advantages—it's safer to keep deadly objects front-of-mind than to ignore them—and as a result, our brains seem to be hardwired so that scary experiences contain hidden fascination, and fascinating experiences are often scary.

In fact, I'd argue that there's a direct correlation between the intensity of our fear and the degree of our fascination: Murder yanks our attention harder than heart disease; an earthquake is more interesting than a bad sunburn. This applies even at the much lower fear levels that characterize most of our lives. Think TV dramas: Arguments are more attention grabbing than agreement; the path of true love more interesting when it's forbidden and dangerous than when it runs smoothly.

One way to put more zest into your life, then, is to seek activities or situations where fear and fascination overlap. The problem is, when facing such situations, we often dither, advancing toward and then retreating from whatever has captured our attention. But with a little clarity and a few instructions, you can break through this kind of ambivalence, embracing experiences that alarm you even as they deeply appeal. Like salting bland food, this can turn your life from dull to delicious.


Go ahead and think of something that both intrigues and scares you. It might be profound, like falling in love, or relatively trivial, like Roller Derby. (No offense, ladies. I'm fascinated by the idea of women who could stomp me to paste.) If you're having trouble coming up with something, look for the word but in your statements of desire: "I'd love to make more friends, but I have social anxiety." "I'd give anything to travel, but I'm afraid to fly." "I'm dying to express my real feelings—but then I'd actually have to speak to my sister-in-law."

Now plop your but down in the space below. Write the scary thing you want to do, and the fear that's keeping you from doing it:

Identifying this fascinating fear is a first step to a more fulfilling life. Next, you need to get familiar with a couple of crucial rules.

Rule One: Don't Play with Poison


One fine day a woman known to science as "S.M." suffered a stroke that left her unable to experience fear. She became irresistibly curious about things she'd once hated; for example, in pet stores she'd beeline past the puppies and go right for the snakes. She liked to play with their tongues. If you share this passion, okeydoke. Just make sure the snakes you play with are nonvenomous.

I mean this both literally and metaphorically. Because fear and fascination are so intermingled, many people who follow their thrill-seeking instincts end up unconsciously flirting with disaster. They snort drugs made of toilet cleanser, they break laws, they date people who have that "dangerous vibe." But toxicity isn't the way to feel more alive; it's a gamble that you'll become more dead.

Considering the fascinating fear you wrote down above, ask yourself: Is this desire destructive? Will it ruin life, health, or property? If so, scribble it out. And after reading the next rule, come up with something else.


A good way to find a fear that's both fascinating and nontoxic is to choose something that will make a positive impact on the world. Constructive and creative activities—whether taking medicine to war zones or fostering a child—can be downright terrifying.

So, would your fascinating fear have any positive effect? Would it enlighten you, or improve your life, or someone else's? Whether the answer is yes or no, see if you can amend your goal to make it a bit more heroic. Don't just bungee jump; bungee jump to raise money for AIDS research. Don't just do stand-up comedy; do stand-up comedy that teaches people something deep and true. Don't just invite that hottie to go out with you; invite that hottie to go out with you and help campaign for your favorite cause. Write your new-and-improved statement here:

When people frame a scary fascination this way, their motivation usually increases and their fear feels comparatively smaller. Increase the positive effect of your scary action until you're aiming to do something really wonderful, and you'll feel your inclinations tip from avoidance to attraction. You're still scared to take the action, but you know it isn't toxic, and your moral compass says "Go!"

It's time to act.

Steering Through the Fear


Maybe your scary/interesting goal involves something you have to do. Maybe it involves a cause, or maybe it's pure thrill. The best activities answer to all three masters—for example, a career can pay the bills, serve the world, and frighten you just enough to keep life interesting. But even in such ideal cases, scary is still scary. Fear often stops us from acting even when fascination won't let us walk away.

Being prone to anxiety myself, I fall into the approach-avoidance trap approximately three times a week (a huge improvement from my youthful average of always). I was 14 when I realized that since everything scared me, I could either do scary things or kill myself; fortunately, I was too scared to kill myself. Every day since then, I've done at least one thing I was afraid to do. So I can promise you, the process below has been battle-tested up the wazoo. Holding your fascinating, frightening, heroic goal in mind, simply follow these steps:

You may not actually need this step, but I certainly do. After writing down a fascinating, frightening goal, I like to find a comfortable spot and scrunch up like a troubled armadillo for five minutes (or days). Depending on my fear level, I can change this up by rocking, pressing my palms against my eyelids, and/or keening. Experiment to see what works best for you!

After your armadillo time has marginally calmed you, take a deep breath and begin outlining a step-by-step plan to achieve your scary objective. Your fear will want to drag you into obsessing about possible problems in the future. But be here now: Your job at this moment isn't facing what you fear, but planning to face it. While you're planning, don't execute or fret. Just plan.

3. Take one step toward your goal.

A good planner breaks down every challenge into manageable chunks. Once you've done that, forget about the long term and take the step that's directly in front of you. Don't even think about the next one. You only have to take that one step. Ever.

Heroes aren't free from fear; they're just so focused on a worthy goal that they feel they can't turn back. Most of humankind's great achievements—the sorts of things that make us say, "Oh, wow!"—were accomplished by people who were muttering or shouting, "Oh, shit!" Heroes don't feel special, just dogged. They walk their scary paths with shaky knees and trembling hands. One shaky, trembling step at a time.

5. Watch the path, not the obstacles.

Got it? Where our attention goes, our lives go. As you take each step, be peripherally aware of dangers, but glue your attention to the path between them.

Many of my clients think they don't deserve to celebrate until they've conquered huge fears to reach epic milestones. Not me. To stay motivated, I celebrate after I make one bed, write one e-mail, fill out one page of a tax form. Even if you're much more courageous than I am, I suggest you do the same. Celebrating makes fascination all the more joyful—and it builds confidence, which is much more useful than avoiding fear.

If you live this way—seeking out what captivates and cows you, pushing beyond your comfort zone, making sure you're serving a noble purpose—you'll live a life full of absorbing adventures. You may even save the world. In which case, the rest of us just might end up watching you on TV, in between doctors diagnosing horrible illnesses and detectives solving grisly murders. And just think how thrilling that would be.

Martha Beck is the author of six books, including Steering by Starlight (Rodale).

More Advice From Martha Beck
From the October 2011 issue of O, The Oprah Magazine

More Inspiration
Fear Of Free Time
Do You Feel Your Age?
6 Steps to See Yourself More Clearly
5 Pieces of Advice Everyone Ignores (but Shouldn't!)
Common's Aha! Moment: Learning to Speak Up For Myself
4 Steps to Find Your Life's Path
Martha Beck's 5-Day Journey to a More Meaningful Life
The Secret to Surviving Life's Low Points