Coming of Age with the Ephron Sisters—and Their Mother

Four sisters, all writers—not just the one we know best—came of age in the shadow of a complicated, talented, hard-drinking mother. It wasn't easy, but it made them who they are.
By Hallie Ephron 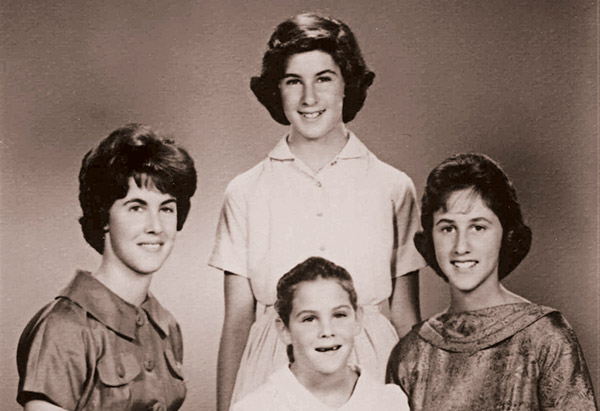 Photo: Courtesy of Hallie Ephron
"I loved your sister." I hear that refrain from strangers at writing conferences, libraries, and bookstores, wherever I go to talk about my own novels. I accept heartfelt condolences from people who never met Nora but adored her movies and her books.

These well-meaning strangers often ask, "What was it like, being her sister?"

I tell them that I looked up to her the way younger sisters do. That she was seven years older than me and a tough act to follow. I might add that she was a voracious reader with a monster intellect who had opinions on everything, including things she knew little about. Once, after a particularly lively discussion during Thanksgiving dinner, I asked Nora how in the world she managed to stay so well informed. "I don't," she told me. "It doesn't matter how much you know; what matters is how confidently you say it."

She also had an uncanny sense of what was soon to be current. She wrote about quiche before many of us had tasted, never mind baked, one. She wrote about breasts before we were comfortable seeing the word in print. Her essays on aging had a generation of women obsessing over their necks.

Living as she did through the birth (and some would say death) of women's lib, she was a feminist. But she bristled at being labeled. She led by example, not by carrying placards. She was hardworking, with seemingly boundless energy—even in her last week in the hospital, fighting leukemia and exhausted from chemo, she was developing a new project.

Sympathy was never Nora's strong suit. She was the last person I'd call if I needed a shoulder to cry on. She'd say, "Deal with it." That's what she did when bad things happened; pity was something she neither accepted nor offered. It made perfect sense to me that she didn't tell many of her closest friends how sick she was.

Beyond this, I knew her well enough to know I didn't know her that well at all.

Next: How their mother shaped their paths
From the March 2013 issue of O, The Oprah Magazine

More Inspiration
Oprah Talks to Maya Angelou
What a Divorced Mom Realized She Really Needs
The 10 Best Mother's Day Quotes
How to Train Your Mother
Learn to Love Your (Naked!) Self
Why Poetry Can Save Your Life
Grace Paley on How to Tell a Story
How to Enjoy the Pleasure of Your Own Company