How to Deal with a Know-It-All

There’s one in every crowd—the big kahuna, the top dog. She corrects you, one-ups you, interrupts you, and insists on solving problems you’d rather just whine about. Here’s how to muzzle her.
By Martha Beck 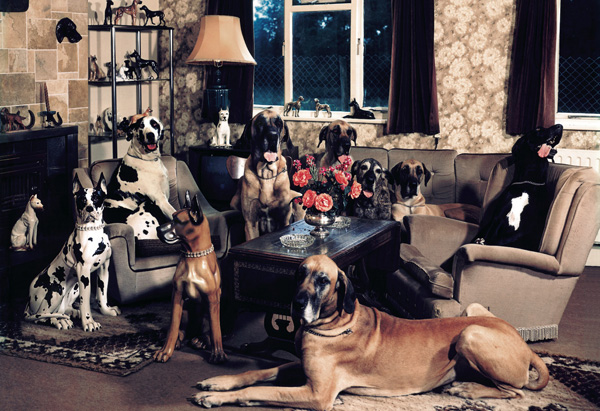 Recently, due to several misguided decisions, I found myself having a sleepover with five friendly but ambitious dogs. The entire night was one long dominance display. No sooner had I settled each pooch onto a separate cushion than the biggest one got up, grabbed a chew toy, and stood over the others, proclaiming (in dog language): "I am Bjorn! And I am Pack Leader! For this toy is mine! And I own this toy! And the toy is my property!" and so on.

It reminded me so much of Harvard, I got a little misty.

We humans use many "toys" to claim dominant status in our own packs—cars, clothes, houses, job titles—but one of our favorites is knowledge. In our school system's educational meritocracy, having answers means winning praise and attention. This has given rise to a certain breed of human, commonly called the know-it-all, which tends to frequent university settings. Know-it-alls can be good companions, but the breed also has many annoying behavioral problems that must be dealt with decisively if you're going to have any peace. Before we discuss training techniques, here's a short list of ways in which know-it-all behavior problems are often manifested.


In dog packs, being big and strong is the quickest way to dominance. In humans, sheer physical power, though useful, is often trumped by being right. Many know-it-alls have high IQs, but such low EQs (levels of emotional intelligence) that they actually think people admire them for saying things like "It's a common misperception that, as you so quaintly phrased it, 'You never know what's going to happen,' but that rationale applies mainly at a subatomic level of analysis, while in a macro setting, Laplace's model of a mechanistically determinate universe remains a remarkably robust predictive cosmology."

In a few paragraphs, we'll discuss appropriate responses to such comments. But your initial response to a know-it-all assault like this one should be to remain calm and resist the urge to bite.

The "God Is in the Details" Display


Detail-oriented know-it-alls don't sit around memorizing textbooks. Instead they correct others' versions of events, often missing the whole point of a conversation in their obsessive focus on minutia. Their conversations frequently go something like this:

Ordinary person: So there we are at Breakfast Buffet, having waffles, and this guy comes in with a gun! A semiautomatic! And he's waving it around—

Know-it-all: No, that's wrong. You weren't having waffles. I had waffles. You had the French toast.

Ordinary person: All right, whatever. Anyway, this gunman is yelling, "Where's my wife? Where is that two-timing slut?" And then—

Know-it-all: I'm sure you didn't have waffles, because when we got our order, you said to me, "Darlene, now I wish I'd ordered the waffles, because those are some good-looking waffles you got there." Remember?

Ordinary person: Okay, okay. So anyway, then he starts shooting at the pie counter, and there's pie flying everywhere, and—

Know-it-all: You've never had waffles since that time in Hoboken when you had the hiccup problem.

Detail-oriented know-it-alls have been known to sustain a conversation like this, with periodic interruptions, for up to 50 years. Most of their friends simply talk over them, though if you have a detail-oriented know-it-all in your immediate circle, it helps to have a choke chain available for emergencies.
From the November 2006 issue of O, The Oprah Magazine