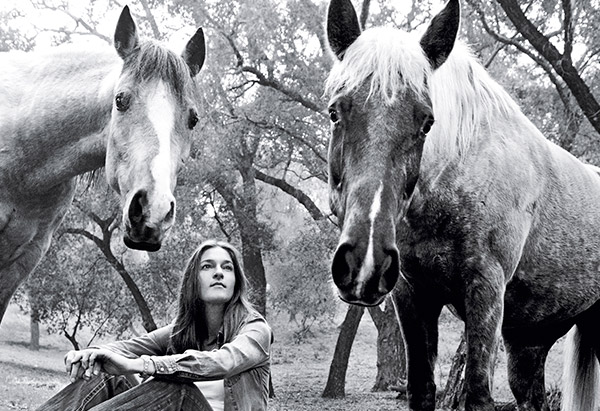 Photo: Phyllis Lane
PAGE 3
Simpson with equine life coaches Rider (left) and Grace in San Luis Obispo, California.
From the outside, Avery's life looks perfect: A social-media director at an apparel company, she's married to her college sweetheart, Tyler, and has two spirited teenage children. But there are cracks in the foundation. Tyler drinks too much, and the couple have been arguing a lot. Avery fears she's losing control of her teenagers. She often hears herself exploding at them the way her own mother used to shout at her. Recently, her anger has been leaking out at the office, too. She contacted me after a scathing argument with a Web site developer—over a choice of font—led to a teapot tempest that almost got her fired.

Now, though, in the round pen, Avery is the opposite of fiery, standing in uncomfortable silence as Ernie lurks nearby.

"Tell me," Koelle asks Avery. "How often do you ask yourself what you actually want? Where you'd like to go, what projects sound fun, what would feel delicious to your body and your heart?"

Avery squints as if Koelle were speaking Klingon. "Is that even possible?"

"It's possible right here, right now," Koelle says. "This is the situation: You're in a round pen with a horse. Given that, what do you want to do?"

"Well," says Avery, staring at Ernie. "What does he want to do?"

"Exactly what he's doing," says Koelle. "Within the limits of the situation, horses will always do what they want."

Ernie is an average-size horse, which is to say about ten times as heavy as Avery. He could accidentally crush her foot with a casual step. One solid kick (which Ernie has no intention of delivering) could cave in her skull. And so when he whinnies, trying to call his herd—a sound as loud as a car alarm—Avery tenses and darts a fearful glance at him. Abruptly, Ernie moves away.

"Actually," says Koelle, tracking Avery's eyes and body language, "you just asked him in his language to give you more space, so he did. He's being respectful."

"Really?" Avery looks at Ernie calmly for the first time. She lets out a sigh. Ernie heaves his own sigh in response.

Avery brightens. "I know what I want!" Ernie immediately begins walking toward her. By the time Avery says, "I want a kiss!" he's already touching his whiskery lips to her shoulder, her cheek, her hair.

"He's responding to the picture in your mind," says Koelle.

Next: Learning how to let go of unhappiness, exhaustion and anxiety
From the August 2013 issue of O, The Oprah Magazine

More Inspiration
Martha Beck: How to Survive Life's Roughest Patches
6 Things You Need to Do to Feed Your Soul
5 Things That Are Holding You Back In Life (and How to Overcome Them)
Your Best Life Is Waiting
How to Recognize When Someone's Personality Is Truly Toxic
Why Love + Kindness = Thinner Thighs
How to Take a Leap of Faith—and Make a Perfect Landing
5 Steps for Tapping Into Your Intuition