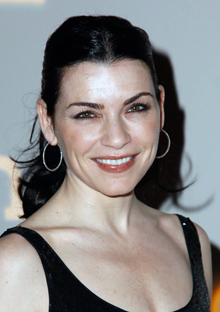 Photo: J. Kohen/WireImage.com
It took an exhausting night, complete with crying baby, for the actress to understand in an instant what her mother had been telling her for decades.
I went back to work last summer when my son, Kieran, was 5 1/2 months old. In my business, we work 17, 18 hours a day, and I was exhausted. And when you're tired, your emotional self sings the loudest, so you don't always think clearly.

One night Kieran woke up at 2; my husband was away, and I had a 6 A.M. call time to be on set. I didn't know what was wrong with him—maybe gas pains—but whatever it was, this baby was not happy. I worked myself into a complete state of anxiety about how I wasn't going to get enough sleep, how I was going to be late for work, how I'd be tired when I got there...all of which only made things worse. And just then, I heard my mother's voice in my head saying what she'd always told me: "Honey, this is only a moment; it's not the rest of your life."

When you're young, you tend not to listen to your parents. Then you become a parent yourself and you think, "Ohhhh, so that's what she meant." I never really understood what she was talking about until that night. It was so poignant, because I got it in one second.

I immediately calmed down. As I held Kieran, I thought, "What's the worst that can happen? So I'll have bags under my eyes; that's what makeup people are for." As I relaxed, so did the baby, and at last I could put him down and go back to bed. Was I tired when I went to work after three hours of sleep? Sure. But I got through the day.

At any given moment, we're usually thinking about what has happened in the past or what's going to happen in the future. I'll be in the middle of a scene at work and think, "Oh my God, I didn't tell the nanny she needs to come early tomorrow!" I constantly have to reel myself in because I'm a doer, and I'm always thinking about what's next on my list. We're always being reminded to stay in the present moment, but when that present moment is a stressful one, you think it's going to last forever. My mother's saying put things in perspective for me in a remarkable way, because it made me realize that all moments pass quickly, the good ones as well as the bad. I became cognizant of that the night I sat there, tired, holding my crying baby: "Before I can blink an eye, he's going to be 14 and not letting me into his room!"

Since that night, I say to myself at least once a day: "This is just a moment; it's not the rest of your life." I say it to my niece, who's 19 and isn't sure what she wants to do with her life; when she's 30, she'll wish she had just enjoyed being 19. I tell it to my friends who are having babies. I say, "Enjoy all of it, even the stressful things, because you'll never have that time with them again." What people say is true: You should live in the present. Instead of making difficult times hard, make them loving. Knowing that this is just one moment, whatever kind of moment it is, is a more peaceful way to live.

— As told to Suzan Colón

More Inspiration
4 Ways to Squeeze an Extra Hour (or More!) into Your Day
Breaking the Multitasking Habit—One Step at a Time
Becoming the Person You Were Meant to Be: Where to Start
What to Do If You're Afraid of Change
The Real Meaning of Your "True Calling"
Creativity Boost: How to Tap into Right-Brain Thinking
3 Quick Ways to Eat, Pray and Love
5 People Who Have Switched Careers (And How They Did It)